I wrote this about ten years ago. It’s still an important story.

Though Tony Blair and George Bush installed the interim Iraqi prime minister it was Winston Churchill who installed the first puppet King of Iraq and whose advisors carved its borders out of Mesopotamia, following Britain’s invasions in 1915 and 1918 as the Ottoman Empire collapsed.

After uprisings against British rule in the Shia holy city of Kerbala and in Basra, it was also Churchill who authorised the use of poison gas against Iraq’s “uncivilised tribes”, as he called them, thus leaving a bitter legacy which Iraqis have never forgotten. It wasn’t until 1932 that Britain gave Iraq notional independence; though twenty years later the monarchy was overthrown to be followed by a series of coups and ultimately the instalment of the West’s ally, Saddam Hussein.

Recently, I was reading George Bernard Shaw’s play, ‘John Bull’s Other Island’ and in the preface to the book I came across another reference to British involvement in the Middle East and an incident in 1906 which Shaw refers to as ‘The Denshawai Horror’.

Now, you will not find too many references to Denshawai in British history books and, I suppose, as an example of colonial cruelty it is, thankfully, at the lower end of the scale. Nevertheless, you can be sure that Arab nationalists and historians in the Middle East, including Iraq, are well aware of the episode. In Egypt there is a famous poem, ‘The Hanging of Zahran’ about the incident, and an Egyptian film, ‘Friend of Life’, based on the poem was directed by Nagui Riad (one of whose films won first prize at the Cork International Film Festival).

Even fifty years after the event the great Egyptian journalist Muhammed Hassanein Heikal used the expression, “the pigeons of Denshawai have come home to roost”, to describe Egypt’s triumph over Britain’s folly in trying to militarily re-take the Suez Canal along with the French in 1956.

Following its naval bombardment of Alexandria and its invasion of the Suez canal in 1882 the British occupation of Egypt began. It was to last for seventy-two years.

Denshawai was a small village in the Nile Delta where the locals supplemented their meagre incomes through pigeon farming. They had previously complained to the authorities about British soldiers shooting their pigeon stock as game and were given to understand that it wouldn’t happen again.

On June 13, 1906, five khaki-clad British officers with guns, an interpreter and a police official, arrived and began shooting the pigeons. The villagers were furious and remonstrated with them. There was a scuffle during which shots from one of the officer’s gun struck five villagers, including the wife of 25-year-old Abd-el-Nebi, who appeared to be fatally wounded. Abd-el’s grain pile in a threshing house was also set alight by the shots.

Abd-el hit the supposed murderer of his wife with a stick, and 60-year-old Hassan Mahfouz, whose pigeons had been killed, also used a stick on the officers. Other villagers threw stones at them. The officers, two Irishmen and three Englishmen, surrendered their weapons, watches and money to appease the villagers but were still pummelled. Two managed to escape. One of these contacted the British army but the other was smitten by sunstroke and died some distance away. Soldiers who found this dead officer beat to death an Egyptian peasant who had come to help the sick man.

Meanwhile, village elders had intervened and saved the soldiers, one of whom had suffered a mere broken wrist, and they were allowed to return to their base. The following day the British army arrived, arrested fifty-two villagers, including Abd-el-Nebi (whose wife had actually survived), Hassan Mahfouz, a man called Darweesh and Zahran (the subject of the poem). A summary trial (the judges were mostly British) was held and Hassan, Darweesh, Zahran and one other man were sentenced to death for ‘murdering’ the soldier who died of sunstroke. Abd-el-Nebi and another were sentenced to penal servitude for life; and twenty-six villagers were given various terms of hard labour and ordered to be flogged. The officers claimed that they had actually been ‘guests’ of the villagers and had done nothing wrong.

Hassan was hanged in front of his wives, children and grandchildren in the full-view of his own house, along with the others, aged 50, 22 and 20.

Had camcorders been available I have no doubt the British would have recorded the executions to press home their message though they would have suppressed the words of Darweesh on the scaffold: 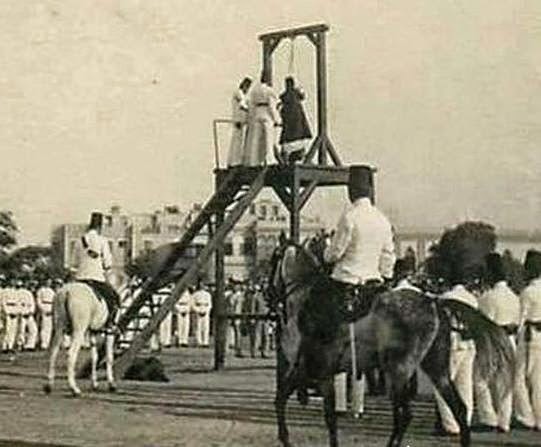 Shaw said that because “they had room for only one man on the gallows, and had to leave him hanging half an hour to make sure [he was dead] and give his family plenty of time to watch him swinging, thus having two hours to kill as well as four men, they kept the entertainment going by flogging eight men with fifty lashes each.”

The House of Commons was later told that “due dignity was observed in carrying out the executions”, “all possible humanity was shown in carrying them out”, and that “the arrangements were admirable, and reflect great credit on all concerned.”

The Egyptian police official who accompanied the soldiers to the village testified in court that after Abd-el’s wife had been shot the officers fired twice on the mob. For his testimony he was stood down, brought before a Court of Discipline and sentenced to two years imprisonment and fifty lashes.

Those in parliament who called into question the Tribunal and its legality were accused of being unpatriotic and of giving succour to “the venal agitators” in Egypt, that is, those who wanted an end to the occupation.

(Déjà vu! On Wednesday in the House of Commons when Tory leader Michael Howard repeatedly demanded an apology from Blair for exaggerating intelligence evidence on Iraq Blair went on to accuse him of failing to back British troops: “It would be more helpful if you would back our troops out in Iraq, rather than doing what you are doing now,” he said.)

Shaw warned then, in a message which resonates even now: “If her [England’s] empire means ruling the world as Denshawai has been ruled in 1906 – and that, I am afraid, is what the Empire does mean to the main body of our aristocratic-military caste and to our Jingo plutocrats – then there can be no more sacred and urgent political duty on earth than the disruption, defeat, and suppression of the Empire, and, incidentally, the humanization of its supporters…”

In a later preface to ‘John Bull’ Shaw wrote, “Nothing was learnt from Denshawai or the Black and Tan terror.”

What Shaw’s story about Denshawai does is remind us that for all the British guff about the unchanging “dreary steeples of Fermanagh and South Tyrone” and our local, allegedly never-ending conflict, there is one thing that truly never changes and that is British imperial arrogance – from Winston Churchill to Tony Blair.