‘The novelist is not a valet to historians’ 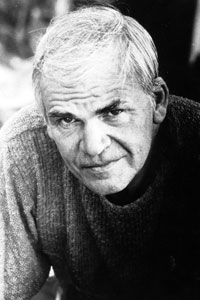 Just finished reading Milan Kundera’s ‘The Curtain – An Essay in Seven Parts’. At the behest of my French friend Joelle, back in 1988, I read his novel ‘The Unbearable Lightness of Being’ and was almost immediately put off by some interpolation he made around page 40 that none of the book was true, he made it all up, and now we’ll go back to the story. For me it fractured the suspension of disbelief. Nevertheless, I read some more of him: ‘The Book of Laughter and Forgetting’ in 1990; ‘Immortality’ and ‘The Art of the Novel in 1992. One shouldn’t judge a man by his cover but he has an impish face which unjustifiably suggests smugness or smart-assness. Having said all that, I enjoyed this book and the range of international literature and authors he covers.

He writes about Dostoyevsky’s novel ‘The Idiot’ [a book I loved]:

‘Until then such a concentration of events within so compressed a time and space could only be found in the theatre. Behind an extreme dramatization of actions (Ganya slaps Mishkin, Varya spits in Gany’s face, Rogozhin and Mishkin declare their love to the same woman as the same moment), every aspect of ordinary life vanishes. This is the poetics of the novel in Scott, in Balzac, in Dostoyevsky: the novelist wants to tell everything by scenes, but describing a scene takes too much space; the need to maintain suspense requires an extreme density of action, and hence the paradox: the novelist wants to hold on to all the plausibility of life’s prose, but the scene becomes so thick with event, so overflowing with coincidence, that it loses both its prosaic nature and its plausibility.’

In relation to surrealist writing [and I suppose he includes magical realism] he says: ‘When Balzac or Flaubert or Proust wants to describe someone’s behaviour within a specific social milieu, any violation of plausibility is out of place, aesthetically inconsistent; but when the novelist focuses his lens on a problematic that is existential, the obligation to give the reader a plausible world no longer comes into play as rule or necessity. The author can be far more casual about that apparatus of data, descriptions, motivations meant to give his story the appearance of reality. And, in some borderline cases, he can even find it worthwhile to put his characters in a world that is frankly implausible.’

In a section, ‘What Is a Novelist?’ he quotes from Proust: ‘Every reader, as he reads is actually the reader of himself. The writer’s work is only a kind of optical instrument he provides the reader so he can discern what he might never have seen in himself without this book. The reader’s recognition in himself of what the book says is the proof of the book’s truth.’

He also refers to a Romanian, E. M. Cioran, who moved to France in 1937 at the age of 26 but prior to that was a cheerleader for the fascists. Cioran died in 1995 at the age of 84 but most of the obituaries, complains Kundera, himself a victim of totalitarianism, concentrated on Cioran’s early politics and not on his sixty years of work as a writer. It reminded me, I suppose, of the raging debate that occurred on the death of Francis Stuart about his role as a Nazi propagandist in the early 1940s and which split Aosdana. In 1949 Cioran wrote: ‘I could not even imagine my past; and when I think of it now, it seems to be showing me the life of some other person. And that other person is what I repudiate; my whole ‘self’ is someplace else, a thousand leagues away from the person he was.’

Interestingly, while most of us laud and encourage young people and exalt youth, Cioran is particularly angry and says: ‘Evil is the doing of young people. They are the ones who advocate doctrines of intolerance and put them into practice; they’re the ones who have need of blood, shouting, turbulence, and barbarism. At the time when I was young, all of Europe had faith in youth, all of Europe urged the young into politics, into affairs of state.’

Kundera refers to some authors I must now explore: Witold Gombrowicz, Danilo Kiš and Ernesto Sabato.

There is a memorable quote in the book: ‘The novelist is not a valet to historians.’