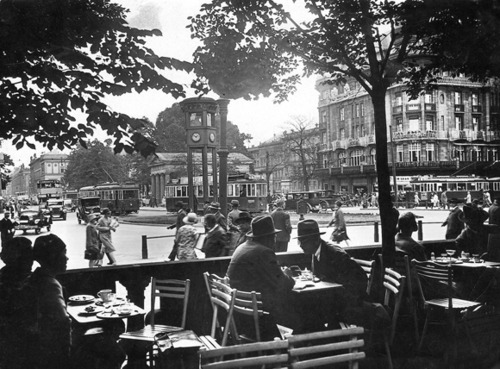 Finished ‘Weimar Culture – The Outsider as Insider’ by Peter Gay. Doesn’t really get into its stride until about page 50 or thereafter. On the influence of poetry Gay writes: “If right-wing nationalists had their poets, so did the Social Democrats. And if many saw the poet as a sublime prophet and lawgiver, there were others who saw him as the critic of society, the realist who told society how it looked to him, and the goad who might seek to improve it.”

On the extravagant claims made by writers and poets he notes: “Franz Werfel recalled the time of the First World War almost with fondness as a time when “the word still had power,” and the word he meant was the word of the poet, the sacred figure one could easily entrust with authority. But things were not so simple. Men of the word tend to overestimate the power of the word. It is an old illusion, left over from neoclassical theory, that poetry and the drama have immediate and direct effects, persuading the audience to action.”

He mentions the work of the German historian Friedrich Meinecke, Idee der Staatsräson, 1924, described as literature, philosophy and autobiography, and which is aimed at grasping “the dialectical struggle of light and darkness battling one another in unappeasable conflict yet yoked together in indissoluble brotherhood… Meinecke traces the conception of raison d’état [the national interest/for the good of the country]… [and] demonstrates its importance and its problematic quality; the state has its needs – maintenance and expansion of its power in a system of competing states – and the statesman finds himself compelled to act in ways that he, as a moral man or in private life, would condemn.”

Gay notes that “[Meinecke’s] very vision of power as a tragic phenomenon is an unfortunate philosophical habit inherited from German Idealism; it gives a practical question metaphysical dignity, which must lead not to analysis but to resignation… [Meinecke] never saw that the tragic view of the state helped excuse its crimes, that the poor had no stake in the state’s growth in power or glory, that the state was not nature’s final answer to the problem of  human organization, and, quite simply, that the state did not always, indeed not often, represent the public interest.”

13th February. Finished The Caravaggio Conspiracy by Walter Ellis about nefarious goings-on, appositely in the run-up to the election of a new Pope! Well-plotted and well-researched (especially about Vatican politics and protocols) I am surprised it didn’t get lots of reviews and was certainly under my radar until bought as a birthday present.

6th February. Did an interview with Mark Wilson, a student at Stranmillis who is doing a dissertation on the 1981 hunger strike.

31st January. Did interview on BBC Radio Ulster’s Talkback  with Arlene Foster (DUP) and Conall McKevitt (SDLP) regarding Gerry Adams’ apology in Leinster House to the family of Detective Garda Jerry McCabe who was shot dead by the IRA in June 1996. His apology came in the wake of the recent killing of another Garda, Detective Adrian Donohue shot dead in a Co. Louth raid on a credit union.

22nd January. Finished Peter Caminzind by Hermann Hesse. An early beautiful novel which presages Hesse’s future works and themes. Caminzind’s surprising friendship with the invalid Boppi is very moving and reminiscent of that affection which develops in James Leo Herlihy’s Midnight Cowboy between Joe Buck and Enrico ‘Ratso’ Rizzo. But Caminzind also describes his alienation from society: “In Umbria I humbly followed the steps of St Francis, the musician of God; in Florence I basked in the permanent revelation of the quattrocento. I had already composed satires at home on contemporary life, but it was in Florence that I first became conscious of the threadbare stupidity of modern culture. It was there too that I was overcome for the first time by the feeling that I would always be a stranger in our modern society, and the impulse first awoke in me to lead my life outside of it, if possible in the south. There I could talk with people and savour a natural, unspoilt life which had been ennobled and refined by the tradition of its classical and past culture.”

Later: “I am prepare to admit that I took one wrong path after another, waded in every kind of pitch and did not escape undefiled. Since then I have lost my enthusiasm for the ‘romantic’ and bohemian life…”

18th January. Finished HHhH by Laurent Binet. Appreciated the telling of the story of the assassination of Heydrich but am in two minds about the self-indulgent way it was told with the author wandering off into personal diversions about his girlfriend, his views on Jonathan Littell’s The Kindly Ones, and his ruminations on the subterfuge involved in constructing a novel. Clearly much influenced by that smartass, often infuriating Czech, Milan Kundera. But interesting points made regarding the decision to execute Heydrich in the full knowledge that there would follow disproportionate reprisals against innocent civilians.

12th January. Received many presents from generous friends at my 60th birthday, held in the Roddy’s club last night. Aside from the champagne, wine, whiskeys, book tokens and vouchers, I got The Complete Short Novels by Anton Chekhov, Seamus Heaney’s Opened Ground – Poems 1966-1996, The Garden of Evening Mists and The Gift of Rain by Tan Twan Eng, HHhH by Laurent Binet, and The Caravaggio Conspiracy by Walter Ellis. Now I have, in total, about thirty books to read!