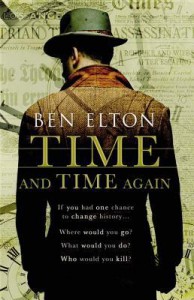 I’ve just finished reading Ben Elton’s latest novel Time and Time Again (published eighteen months ago). And recently I just finished watching the US TV mini-series 11.22.63. The two stories have plots that are remarkably similar – though about different historical characters.

11.22.63 is based on a novel published in 2011 by Stephen King about a time traveller, a High School teacher, who attempts to prevent the assassination of President John F. Kennedy on the basis that had Kennedy lived he would have been a force for good.

In Elton’s novel a former SAS soldier travels back to 1914 to kill the assassin Princip Gavrilo and prevent the assassination of Archduke Franz Ferdinand, so averting not just World War I but also WWII whose roots were in the severe reparations imposed on a defeated Germany post-1918 which gave rise to Nazism, Hitler and the Holocaust.

The repercussions of tinkering with history in both book and film are also remarkably similar. Which presumably must be a bit of embarrassment to Ben Elton whose novel appeared three years after King’s?