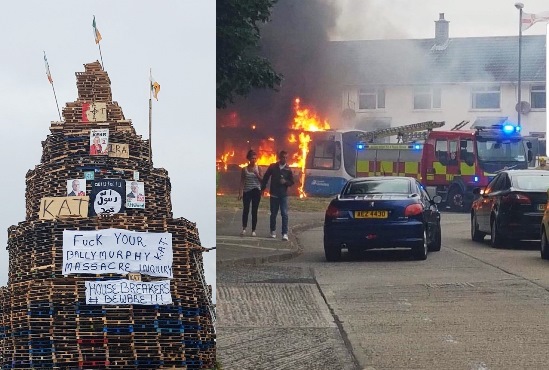 In West Belfast (and other nationalist areas) the tradition of bonfires celebrating the Feast of the Assumption on Our Lady’s Day, 15th August, lasted about one hundred years, and it was something we, as kids, looked forward to.

But there were no nationalist bonfires in Belfast on 15th August, 1969, because the community was preoccupied with the pogrom from the night before and the deaths of local people, including a child, by the RUC and B Specials. There were no bonfires in 1970 because the Falls was just recovering from the July curfew during which the British army shot dead four people and wounded sixty others; or in 1971 because internment had just been bloodily introduced and the community was reeling from the multiple killings of local people.

The bonfire tradition, however, was resumed on 9th August, 1972, in protest against internment. Thus, what once had been a religious-inspired tradition became subsumed into a political tradition, even after internment was phased out in 1975.

These bonfires were never big affairs. But the RUC and the British army had no hesitation in knocking them down by driving through them in Pigs and land rovers before they were lit. Worse, after they were rebuilt and lit and crowds gathered to sing songs, the British army would appear, in order to search people or check their identities – a pretext for starting a fight. Then, claiming they were defending themselves, they would open fire with rubber bullets, and, in later years, plastic bullets. Many people were seriously injured. Riots would breakout, with vehicles being hijacked and burnt. Barricades would go up, behind which more young people would be wounded and some shot dead. It could last for days. In the confrontations the local community lost out most, as the streets lay littered with burnt-out vehicles. Soot and dirt permeated homes, and deliveries and essential services were suspended.

Then, on 9th August 1988, Féile an Phobail began to change all that – displacing that annual conflict instead with arts and culture, song and dance and theatre, hospitality instead of hostility, and it has been a great success, despite its detractors every year going on about a song on the last night of this prom which includes the line, Ooh Ah Up the Ra. 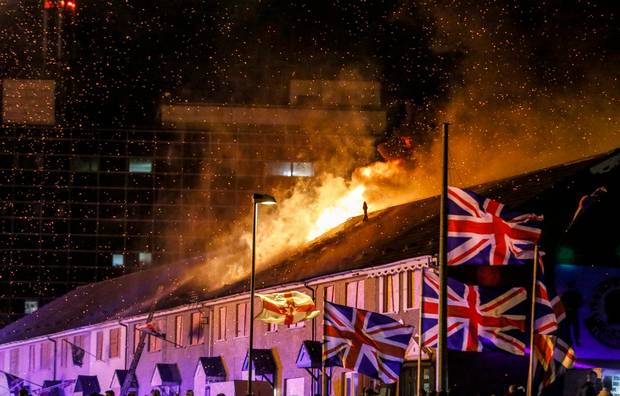 Meanwhile, bonfires on the loyalist side every year get bigger and more aggressive, with no police interference and with little or no direction being given by mainstream unionism. And now, rather than reduce the size of bonfires (the sensible thing to do) the authorities advise people to move out of their homes and the Chief Constable shrugs his shoulders and heads into the sunset.

And are there consequences? For one, whatever faith nationalists have or had in the PSNI dwindles by the day because of the PSNI’s opposition to legacy inquiries and historic inquests (indistinguishable from the stance adopted by the DUP and UUP), and, in front of our very eyes, its refusal to face up to its responsibilities and act professionally. The dissident threat to the lives of PSNI officers, while real, is not of the magnitude to explain nationalist disenchantment and the continuing decline in recruitment, but the double standards of the PSNI are. No one is asking it to drive through loyalist bonfires or open fire on the young people singing. Just to act like professional police would. There is more than one community and it must act on the behalf of all.

And mainstream unionism? The PSNI must investigate the band! Funding to Féile must be withdrawn! Don’t touch our banners and posters! Don’t touch our Eleventh Night bonfires – they’re part of our culture. And the anti-nationalist, I’d say anti-Catholic, rhetoric either reflecting bigotry but also feeding bigotry and intransigence is relentless – “crocodiles,” “house trained,” “quarantined,” “unfit,” “rogue Sinn Féin,” “renegade SDLP”.

They cannot get it together.

Cannot come together with us.

I don’t have the answer.

Although Sinn Féin’s stated position is that it wants Stormont and partnership government back, the fact is – and the republican base know this – it doesn’t have a credible (or willing) partner. An unreconstructed executive would collapse in months resulting in even more depression and despair.

So, we are all trapped. Those nationalists who, unthinkingly, want Stormont back at any price (and perhaps marginally punished Sinn Féin electorally in May) aren’t strong enough to compel Sinn Féin to compromise, even if it wanted to, which I doubt. Even if Fianna Fáil and Fine Gael continue their cynical strategy of hurting Sinn Féin in the South by exploiting the absence of a Stormont executive, that won’t magic an executive into being.

And all of this is before we even discuss the nightmare of Boris Karloff’s Frankenstein running Britain, a no-deal Brexit and an inevitable return to a hard border.

Have a good Twelfth.

Board up your windows and have the Fire Brigade on standby.