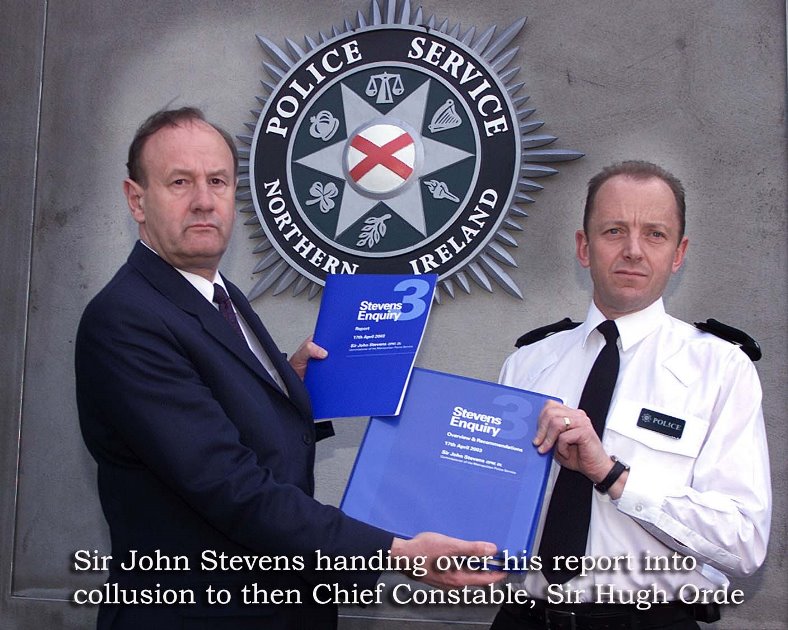 In April 2003 I wrote a feature for The Examiner about the (non) publication of the Stevens Inquiry report and the reaction of some in the British establishment who rode to the rescue of state assassins. (It was later published in my book, Rebel Columns.) Parts of the feature have dated, but not the thrust of the observations. I am republishing it, both in light of the unresolved issue of legacy (and the propaganda of apologists for state agencies, not least in the News Letter’s current one-sided series), but also because journalists like David Aaronovitch (whom I mention) have in recent days been falsely linking the British Labour Party leader, Jeremy Corbyn, to the IRA and IRA bombings in London in the 1980s.

NEWSPAPERS around the world, after the publication of just part of the Stevens Inquiry, have indicted Britain with headlines such as, ‘British Officers Helped Kill Ulster Catholics’. In any democracy this should have been the occasion for questions in the House of Commons, except that the report into the largest criminal investigation in British history – with its sensational findings of official collusion – was published the day after parliament went into the Easter recess!

Nevertheless, the reaction of some in the British media, coming to the rescue of their army, was to be expected. Max Hastings in the Daily Telegraph said that collusion was a ‘dreadful policy’ but glossed the immorality through a piece of sophistry. “Most people find it hard to regret the deaths of those involved in any way with Irish terrorism… In the absence of a death penalty, many British people have rejoiced when the security forces killed IRA terrorists in firefights or hot pursuit. In the 1980s, the Army’s Force Research Unit decided to give this benign process a helping hand.”

David Aaronvitch in The Observer wrote that, “it was pretty much inevitable that some security force personnel would be tempted to use loyalist terror groups as a shadowy proxy… How can a man such as Michael Stone (or a Martin McGuinness, some might add) be walking free, and yet we are contemplating imprisoning the policemen who were trying – albeit illegally – to stop the terror?”

Benign process? Albeit illegally? The terror?

According to the book Lost Lives (1999) loyalist paramilitaries were responsible for close to 30% of the deaths during the conflict, and British forces for 10%. That latter statistic is regularly used as simplistic proof that the authorities acted in a controlled, disciplined and lawful manner compared to the IRA, which was responsible for almost half the lives lost.

In 1989 the UDA killed Loughlin Maginn at his home in County Down. When his family denied that he was in the IRA the UDA produced a photograph of Maginn in RUC custody, which could only have come from a police or military source. The outcry from this resulted in RUC Chief Constable, Hugh Annesley, initiating an inquiry under John Stevens into allegations of collusion.

Stevens found the fingerprints of Brian Nelson, a former British soldier and member of the UDA with convictions for attempting to kill Catholics, on hundreds of leaked intelligence documents. When he was arrested he told Stevens that he was working for the authorities. It is reported that Nelson died of a brain haemorrhage two weeks ago.

Nelson was living in Germany when Colonel Gordon Kerr (pic, inset) who ran the secret Force Research Unit recruited him. Nelson was groomed to become the UDA’s chief of intelligence, liasing with his FRU handlers who passed on to him thousands of official documents on republican suspects, which were then used to assassinate people – and often the wrong people. Sometimes Nelson informed his handlers of impending murders but they chose not to act in order to protect his anonymity.

Nelson was originally charged with murder but on the eve of his trial the Director of Public Prosecutions and the British Attorney-General, Sir Patrick Mayhew, agreed a deal with Nelson that allowed him to plead guilty to lesser charges so that he would not have to be cross-examined thus avoiding details of the collusion from emerging.

Stevens also sent files on Gordon Kerr and other operatives, including a Special Branch officer in the RUC who is now a senior member of the PSNI, to the DPP. There were no prosecutions. The reason? “It would not be in the public interest”.

In carrying out his inquiries Stevens met with resistance and obstruction. Even his headquarters was set on fire by the British army in an arson attack, which he accused the RUC of never fully investigating. It was reminiscent of other obstructions to inquiries into the RUC and military. 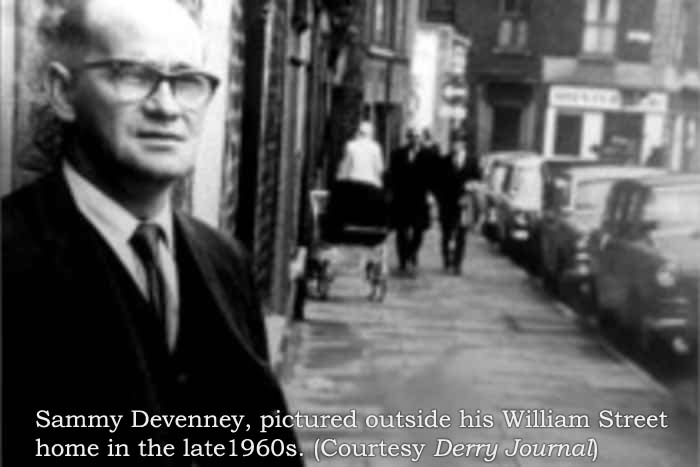 WHEN Sir Arthur Young carried out an inquiry into the fatal assault on 42-year-old Sammy Devenney in Derry by the RUC in 1969 he could not identify those responsible because of ‘a conspiracy of silence’ among the police. When John Stalker came here in the 1980s to investigate a number of RUC shoot-to-kill incidents he found himself suspended over false allegations that he associated with Manchester criminals and was removed from the inquiry.

Among the controversial deaths Stalker was inquiring into were those of three unarmed IRA men who were shot dead at a police checkpoint in Lurgan in 1982. Three policemen, who lied about the circumstances of the shooting, were charged with the murder of one of the men, Eugene Toman, but were later acquitted. Giving evidence one of those charged said that he had been told by his superiors to lie to the investigating officers and that the Official Secrets Act would cover his actions. The three were acquitted and the judge, Lord Justice Gibson, perversely commended them, “for their courage and determination in bringing the three deceased men to justice, in this case to the final court of justice.”

The judge’s gung-ho support for killing unarmed republicans was not unusual and was part of a pattern between the judiciary, the British army and the RUC where law and order and notions of justice were distorted or often set aside in the interests of the war against the republicans.

In one honourable exception to this rule, the Armagh coroner, Gerry Curran, resigned, in 1984 just before the inquests into the deaths of the three unarmed Lurgan IRA men were to be held. He said: “Within the past few days I have been engaged in the review of police files in these cases. Certain grave irregularities are documented and recorded on the file. Consequently, I am not prepared to preside at the inquest in these cases.”

Twenty-one years later, there have still been no inquests. Solicitor, Pat Finucane, became involved and represented the families in their attempts to have inquests until he was assassinated in 1989 in what we now know to be a joint UDA/British army operation.

FRU and MI5’s operations were reported to the Joint Intelligence Committee on which sit members of the British cabinet. However, Stevens has been careful not to implicate those in senior positions within the military and political establishments. But a source within FRU is quoted in the Financial Times as saying that “the activities of the unit had the support of officials higher up the political and military hierarchy although such support was given in a way that left few paper trails and could be ‘plausibly denied’ if and when challenged.”

Another FRU whistle-blower, who uses the pseudonym Martin Ingram, has been gagged from talking about collusion, including acts of murder, by a court order taken by the Secretary of State for Defence, Geoff Hoon. Is it any wonder that many nationalists are sceptical that charges and/or convictions will follow?

As well as acting as an intelligence officer Brian Nelson was also involved in importing from South Africa a consignment of weapons, two-thirds of which the British military allowed to be distributed to loyalist paramilitary groups. In the 1990s these weapons were used to kill over two hundred and fifty people, in places like Greysteel, Loughinisland and Sean Graham’s bookmakers shop on the Ormeau Road.

A number of these weapons have been seized but none have ever been decommissioned. David Trimble has never made a priority of the disposal of these weapons which are still being used, except as an afterthought or as a tag-on to his strident demand that the IRA must decommission its silenced guns and disband.

Clearly, once we factor in the figures for the collusion upheld by Stevens, the total number of people killed, directly or indirectly, by British forces suddenly soars. And yet not even those figures truly reveal the scale of British responsibility in stoking the conflict.

We know that British Intelligence has fought its war on many fronts. It was secretly involved in bombing the south of Ireland and now, despite promises of transparency, the British Ministry of Defence refuses to fully cooperate with Judge Henry Barron’s current inquiry into the Dublin/Monaghan bombings.

British Intelligence infiltrated, influenced and directed loyalist paramilitary organisations over a thirty-year period with a policy aimed at sickening, demoralising and defeating the nationalist community, at thwarting it and its demand for justice and equality.

The Stevens report is only the tip of the iceberg – but it is still shocking and scandalous. Yet, watch as the British establishment rescues its assassins, covers its trail and declares that it is time to draw a line in the sand, to move on and forget the past.