A Tale of Two Diaries

Last night (December 4th) I was at an event in St Mary’s University College, Falls Road, where author Eimear O’Callaghan was interviewed by journalist and political commentator Paul McFadden about her memoir, Belfast Days – A 1972 Teenage Diary. 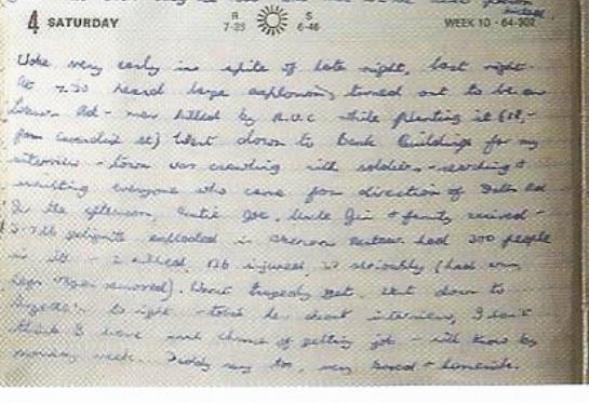 Woke very early in spite of late night last night. At 7.30, heard a large explosion. Turned out to be on the Lisburn Road – a man was killed by RUC while planting bomb (18-year-old from Cavendish Street).

Went down to Bank Buildings for a job interview. Town was crawling with soldiers, searching and insulting everyone who came from direction of Falls Road. In the afternoon, Auntie Jo, Uncle Jim and family arrived.

I don’t think I have much chance of getting the job – will know by Monday week.

It is Saturday, March 4th. I write: 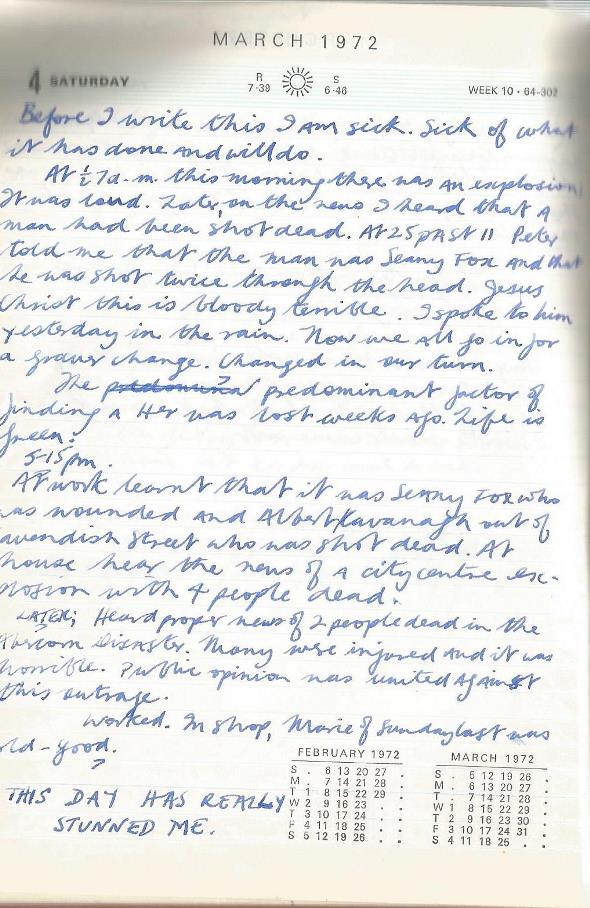 Before I write this I am sick. Sick of what it has done and will do.

At ½ 7am this morning there was an explosion. It was loud. Later, on the news I heard that a man had been shot dead. At 25 past 11 Peter [Fox] told me that the man was Seany Fox and that he was shot twice through the head. Jesus Christ this is bloody terrible. I spoke to him yesterday in the rain. Now we all go in for a graver change. Changed in our turn.

The predominant factor of finding a Her was lost weeks ago. Life is Green.

At work learnt that it was Seany Fox who was wounded and Albert Kavanagh out of Cavendish Street who was shot dead. At house hear the news of a city centre explosion with 4 people dead.

LATER; Heard proper news of 2 people dead in the Abercorn Disaster. Many were injured and it was horrible. Public opinion was united against this outrage.

Worked. In shop, Marie of Sunday last was cold – good.

THIS DAY HAS REALLY STUNNED ME. 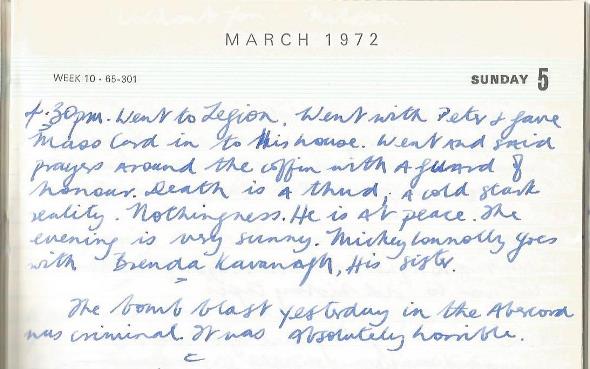 4.30pm. Went to Legion [of Mary]. Went with Peter and gave Mass card in to His [Albert Kavanagh’s] house. Went and said prayers around the coffin with a guard of honour. Death is a thud; a cold stark reality. Nothingness. He is at peace. The evening is very sunny. Micky Connolly [an old school friend from Andersonstown] goes with Brenda Kavanagh, His sister.

The bomb blast yesterday in the Abercorn was criminal. It was absolutely horrible.

Despite what I wrote back then, and despite being horrified about the consequences of violence, I had already committed myself to the republican cause. We certainly live with ambivalence; square ambiguity.

After his release from prison I spoke to Seany Fox. He said that Albert and he were unarmed and set out early to blow up Olympia Typewriters on Boucher Road when there would be no civilians about. They had just lit the fuse when the RUC appeared.

“Once the police saw us they started shooting at us, and the car. The police were about the watchman’s hut when they started to shoot. The car took off. We were about 50-100 yards from the car. We ran towards Windsor Park. There is a 7-foot high fence along the perimeter of the factory grounds separating it from the park. Albert stopped and put his hands in the air. They were still shooting – and still coming. I climbed over the fence. Albert was standing there. I ran about 100 yards. I was hit in the back. I fell and although in pain I was still OK. Albert was still standing with his hands up. There was a policeman covering him as he stood there. Just then the policeman came over to me. He had a gun in his hands and shot me another few times in the stomach and chest. I was conscious. I think I was hit six times altogether. I’m not sure. I was rolling about the ground.

“Albert was still standing at the wire. The other policeman then shot Albert – I suppose he thought I was dead. I don’t know how many times he was shot. There were two bullet holes in his head – in the forehead and bullet wounds on his back. This I found out in my depositions at the trial. I was lying there, the bomb went off and all the people came out from the district – the Village. They gathered round me, threatening to burn me. Some of them put wood on my feet. Just at that a patrol of British army soldiers came along. They spread out then.

“The corporal came down to me and fixed me up. He took my coat off, put bandages on me, and I think the British army called for the ambulance. The police walked away when they shot me. I don’t know where they went. When the ambulance came they put me in the back. They drove out of the field on to the road. The policemen stopped it on the road and told the ambulance driver that he had to have a man go with it, and the Brit turned round and said: ‘It’s alright, I’m here. I’ll go with him.’ There was an argument between the British and the police – about it being urgent to get me to hospital. ‘This man is going to die,’ one of them said. The Brit went to the hospital. I was conscious even then, remember them taking my shirt and boots off.

“Albert faced them with arms up. He did not run towards the police. The ambulance couldn’t have got in for Albert – the wire was between us. I asked them to get Albert. People told me he lay there for hours.”

Albert was eighteen when he was killed. His younger brother Paul was later jailed two or three times. On the last occasion, he was arrested with Martina Anderson (and others) in 1985 and charged with conspiring to cause explosions in England. Martina and Paul Kavanagh were married in prison and celebrated their 25th wedding anniversary this year. She served fourteen years, he fifteen. They fully supported the peace process and all the difficult compromises that were required to try and promote reconciliation and build confidence between unionists and nationalists. Martina is now a European MP for Sinn Féin. Paul was removed from his position as a special advisor to Deputy First Minister Martin McGuinness following a campaign which led to the introduction of the SPAD bill at the Assembly.

Eimear O’Callaghan’s diary are the observations of a wide-eyed young girl and she goes through all the turbulence and challenges made upon us by history.

It is an honest book. And a good book.