A Woman In Berlin 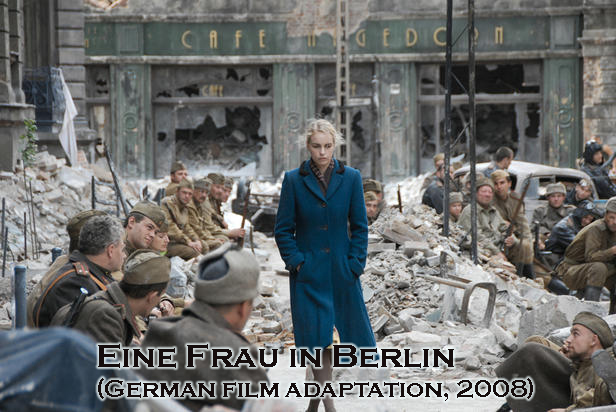 When Soviet troops invaded Germany and overthrew Hitler in 1945, Germans, particularly those in Berlin, knew there would be a reckoning for the death, suffering and pillage their army had inflicted on Russia and the people of the east.

Exultant in victory, and usually intoxicated, many Red Army soldiers engaged in mass rape as they made their way through Berlin. 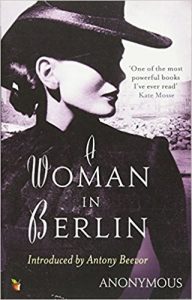 A Woman In Berlin is a contemporaneous account in diary form of the last few weeks of war (20th April to 22nd June, 1945) written with a pencil stub, often by candlelight, by a 32-year-old woman who wished to remain anonymous. When the book was first published such was the hostility, anger and disgust that the author decided it was never to be published again in her lifetime. After her death in 2001 her identity was revealed as Marta Hillers who had been a journalist and worked in publishing. Having travelled in the USSR in the 1930s she had picked up a smattering of Russian and was subsequently to put it too good use.

As the city is being bombarded, thousands of civilians take refuge and survive in fetid basements or bomb-shelters.

“There’s only this group of us huddled in the cave, a clan, just like in prehistoric times. The horizon has shrunk to three hundred paces.”

When they do venture out for food they are often blown to pieces by artillery fire: “Three dead and ten wounded, but they’re already queueing up again… ‘Anyway, only three dead people,’ she [a widow] said. ‘What’s that compared to an air raid?’ No question about it we’re spoiled, all right.”

The spirit of survival keeps them going. One woman jokes about Hitler’s mother: “‘Just think how much better off we’d be if his old lady’d had a miscarriage.’”

It is an attitude of stoicism which eventually sees the author emerge at the other end of this horror.

When the Russian soldiers arrive, they don’t seem as bad as Goebbels had made out in his propaganda. People come out of hiding and go back to the wreckage of their apartments. Stalin had issued a decree, uzak Stalina, that the Red Army were not to engage in rapine, but within hours Hillers is raped twice. A soldier, by way of explanation, says that the Germans did it to their women, including his sister. Another young soldier asks her to translate and explain to the women what he witnessed.

“‘I don’t believe it,’ answers Frau Lehmann. ‘Our soldiers? My husband? Never!’ Fraulein Behn tells me to ask the Russian whether the soldiers in question had ‘a bird here’ (on their caps) or ‘a bird there’ (on their arms) – in other words, whether they were Wehrmacht or SS. The Russian understands the question right away – the villagers probably learned to make that distinction. But even if it was SS men in this case, our conquerors will consider them part of the ‘nation’ and charge us accordingly. Talk like this is already making the rounds; today at the pump I heard several people say, ‘Our boys probably weren’t much different over there.’

Throughout this story, every time women encounter each other they asked the same question – how many times were you raped by the ‘Ivans’? “‘Four, and you?’ ‘No idea, I had to work my way up the ranks, from supply train to major.’”

In one case twenty soldiers lined up to rape one girl. In another incident Russian soldiers burst into a basement, shooting a man before three of them ravaged his wife, who had survived the war in hiding, and who screams to no avail, “But I’m Jewish, I’m Jewish”, as her husband lies bleeding to death. Hillers also notes that given all the invective and accusations the Russians heap on her “they never once brought up the persecution of the Jews.”

Hillers is used by several ‘Ivans’ until she realises, “I have to find a single wolf to keep away the pack.” And so she does what many others do – enters into a relationship with a senior officer. The women also hide as many of the young they can behind false walls or dress them up to look like boys. One woman in particular is thought to be fortunate because she has weeping eczema down one cheek, which allegedly makes her unattractive.

The soldiers squat in their apartments and supply food, alcohol and cigarettes, and, although ‘friendly’, continue to rape teenage girls and old women, particularly if they become separated from the groups at the water pumps or on the stairwells.

“So,” she thinks, “I am placing myself at his service of my own accord. Am I doing it because I like him, or out of a need for love? God forbid! For the moment I’ve had it up to here with men and their male desire. I can’t imagine ever longing for any of that again. Am I doing it for bacon, butter, sugar, candles, canned meat? To some extent I’m sure I am.”

Hillers cynically notes the fickleness of people: “You hear the same talk in the queue as at the pump: everyone is now turning their backs on Adolf, no one was ever a supporter. Everyone was persecuted, and no one denounced anyone else.”

And others suddenly become proud of some Jewish ancestry or consanguinity, if they can find it: “Everywhere you look ‘non-Aryans’ who’d been kept hidden deep in the family tree are being spruced up and being put on display.”

On May 8th the soldiers suddenly disappear: Berlin, which had also been occupied by the Americans, the British and the French, is to become an international city and is now being carved into zones, with a Russian military administration in East Berlin.

What is remarkable is how quickly the domestic water supply is restored, trains start running again, the electricity repaired and refugees return. But so also does Berlin radio come back on, this time not with bombastic stories about victory, but with details of the death camps, the gas chambers which took the lives of millions of Jews, children, women, men.

Using forced labour, the Red Army guts the factories of whatever remaining machinery there is and ships it off to the USSR. (They even take the phones.) Hillers works at a factory separating copper and brass ingots and later as a washerwoman of linen and military apparel. With Russian largesse now gone she and others live on meagre rations and regularly eats nettles for supper. Typhus is going around and hardly anyone has escaped dysentery. And on top of all that there is the fear which comes from missed periods and the terror of syphilis and gonorrhoea.

Many women chose suicide rather than suffer rape. Some families committed suicide. Some returning soldiers murdered their families because their wives had ‘allowed’ themselves to be raped or because male pride prevented them for forgiving their loved ones (or themselves because their actions under Hitler formed part of the causal chain). Other wives lied, said they were spared, “otherwise no man is going to touch us anymore.”

No wonder A Woman In Berlin which aired such a taboo subject was met with so much hostility and silence.

A harrowing read but a reminder of the savagery below the tilth of civilisation that war so quickly brings out in man.