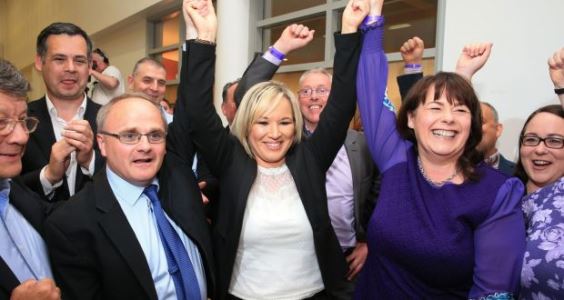 Sinn Féin won seven seats in the Westminster general election, running on an abstentionist ticket, which has been the party’s policy for at least one hundred years.

The SDLP, which boasted about sitting in Westminster but had nothing to show for it, lost its three seats – seats held by three former leaders and two of which have now been taken by Sinn Féin.

And yet despite the wishes of the electorate which had been heavily exposed to all the arguments, Sinn Féin’s critics, including the SDLP and southern political parties, and many in the media, few of whom wish Sinn Féin well, continued to criticise the party for keeping to its manifesto commitment.

I was at the Belfast count on Thursday night/Friday morning and was asked by a succession of journalists about whether in the circumstances of a hung parliament Sinn Féin would not drop its policy and help Jeremy Corbyn’s Labour Party or, at least, make it more difficult for Theresa May to form a government with the help of the DUP.

I said, No, it was not going to happen.

Many arguments have been advanced in defence of abstentionism including that the oath or affirmation of allegiance to a foreign monarch and her heirs presents a difficulty and is inimical to one’s republicanism; or that one’s influence is miniscule and dwarfed by the major parties with few from the North able to demonstrate worthwhile achievements commensurate with their attendance.

These arguments, whilst valid, are not at the core of abstentionism. For example, the oath could be completely removed. Or, imagine Britain a republic. It might well be possible for some of the parties which take their seats to point to pieces of legislation that they have influenced or initiated. In the circumstances of a hung parliament it is undeniable that a tail might be able to wag the much bigger dog for a time.

But even if the oath was removed and I was an MP I would still not take my seat.

Even if Britain was a republic I would still not take my seat.

Even if I held the balance of power and could get through bits and pieces of legislation (while flattering myself as to the magnitude of my importance) I would still not take my seat.

For me, it is quite simple.

How can I object to Britain interfering in Irish affairs if I go over and interfere in theirs?

Once I took my seat, with or without an oath, I have lost the moral high ground on that question of Irish sovereignty. I have already conceded Britain’s right to govern on this shore – a claim that was demonstrably rejected in December 1918 by the majority of people in Ireland in a democratic election.

Even though for reasons of pragmatism I support Agreements which were passed into law in the House of Commons, this does not mean that I recognise Britain’s claim to rule over me as being legitimate.

Leinster House and Stormont, for all their many flaws, are assemblies of the people of this island. Furthermore, the state I live in is not the state I grew up in. Much has changed; often beyond recognition. Much has clearly still to be changed. I am in the business of building a new society in Ireland out of the two states which currently exist. To do that I need to win over a significant body of support from the unionist community, as well as winning over people in the South who have lived for a century under successive partitionist governments which have never acted in truly national terms.

The establishment in the South distances itself from us by increasingly conflating the Twenty-Six Counties with ‘Ireland’, although the threat of Brexit to the southern economy, and to the security of the peace process, has suddenly produced fresh – some might say, opportunistic – interest in reunification.

On Friday, the day after the general election, I tweeted: “In interfering in British affairs the DUP will gather many enemies.” I hadn’t appreciated how quickly that would happen nor the scale of the revulsion.

The British, especially the English, deeply resent anyone else telling them what to do. In simplistic terms it explains their dislike of Europe and the Brexit vote.

As an exercise, imagine that the Labour and Tory wins were reversed and that Sinn Féin’s seven seats would be enough to support a Labour minority government, and that the party, out of the blue, took its Westminster seats.

Make no mistake about it: the British public and the British media would be just as scathing of republicans as they are now of the DUP; although the DUP because of its homophobic, racist and sectarian proclivities present much more fertile ground for ridicule and attack.

And that is because the British, especially the English, do not like outsiders interfering in their affairs. Although the SNP would also have faced criticism were it to prop up, say, a Corbyn minority government, the criticism and the type of condemnation would not be as visceral as the attacks on the Irish unionists because Scotland and Wales are unquestionably viewed differently from the Six Counties.

Incidentally, those famous Irish politicians who did take their oath and seats in Westminster failed abysmally in their objectives. Daniel O’Connell failed to achieve the Repeal of the Union. Charles Stewart Parnell and his Irish Parliamentary Party after decades in Westminster, and his successor, John Redmond, failed to achieve Home Rule, but did manage to sacrifice the lives of 50,000 Irish Volunteers in WWI who were fooled into believing they were fighting for the freedom of a small nation, Ireland.

I’m not including one major success at Westminster by the original Ulster Unionist Party because their exclusion of the Six Counties and the abandonment of the Home Rule Act has proved to be one unmitigated disaster for everyone.

By abstaining from Westminster Sinn Féin is making a powerful statement – that the people who vote for it reject British rule and British interference.

And that is something that should give British people pause for thought: if you are livid at the prospects of a party from here, going over there to interfere and make your laws, how do you think we feel after all these centuries?

This sordid Tory/DUP arrangement, if it comes off, may not last long, will ultimately damage both parties, but more immediately will jeopardise the prospects of a return to devolution.

Why would Sinn Féin go into an executive in which the DUP has a disproportionate degree of influence over the British government – an alleged, joint-guarantor with the Irish government of the Belfast Agreement?

One, perhaps unforeseen consequence of the DUP’s willingness to go into coalition with a British government is that the DUP is effectively relinquishing any objection it might make in the future to Sinn Féin doing exactly the same in Dublin.

For the DUP I hope that the demonization they are facing (and which must appear as unjust and unfair to them) is a chastening experience and one which will make them or their supporters reflect on the antediluvian nature of their policies which encroach on the freedom of others.

I also hope it makes them realise that in actual fact they belong here more than over there.

It is here, not over there, they should be entering into a true pact with their fellow Irish people.