Today on The Nolan Show on BBC Radio Ulster, one of the SDLP’s leaders, Alex Attwood, was asked who was standing for the party in Fermanagh & South Tyrone in the May general election. Alex said the party had yet to decide. In fact, the SDLP convention took place in January, so much for Alex’s knowledge of his own party! They chose a relatively unknown councillor, John Coyle.

Currently, there is a lot of debate around election pacts after the DUP and UUP announced that they had agreed a pact for four constituencies: East Belfast (DUP), North Belfast (DUP), Fermanagh & South Tyrone (UUP) and Newry & Armagh (UUP).

Alex Attwood is hyping up their chances of taking Newry & Armagh from Sinn Féin because high-profile Conor Murphy is not standing and has been replaced by sitting MLA Mickey Brady who probably has one of the best records for constituency work in the North.

Let’s remind ourselves of Alex’s history of hyping!

And, thank you, Alex for giving me the excuse I have been looking for to re-publish a feature I wrote in 2001 about your strategy of getting Bríd Rogers (whose name, I confess, you did know) elected to West Tyrone! Here it is:

HAVING BEEN MOVED to tears by Commander Alex Attwood’s despatches about the war crimes against his people in West Tyrone, your intrepid reporter has risked his life, crossed the Strule River under cover of darkness, and broke through the lines of the Sinn Féin besiegers, to report at first hand the massacres taking place in this most distressful county. 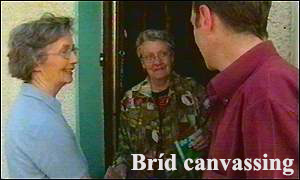 Unknown to the outside world, and to BBC and UTV, food is still getting through, though I did see some demoralised troopers balk at the prospect of having to eat their hats in the grim days ahead. Ordinary people appear oblivious to the siege and go about their everyday lives, working, eating, drinking, golfing, fishing, completing crosswords. However, from David Sharrock of the Daily Telegraph a disturbing despatch is emerging of serious war crimes in the smouldering village of Greencastle. It appears that twice in the space of one hour, Commander Attwood’s lieutenant, Bríd Rogers, was twice insulted and called bad names by a man who was home from England for a holiday and had had a few drinks.

ON A MORE serious note, has the SDLP completely lost the run of itself? I strongly suspect that it was Alex Attwood who came up with the silly idea of describing the battle for West Tyrone in the general election as the SDLP’s ‘Stalingrad’. In history the 1942 siege of Stalingrad simplistically represents the forces of good (the starving citizens of that city and its outnumbered Soviet Army defenders) seeing off the forces of evil (Hitler’s armies) and reversing the tide of WWII. But a little bit of history, like knowledge, can be a big bit dangerous. At Stalingrad Hitler was humiliated and found himself out-manoeuvred by the unexpectedly talented young Soviet commander Zhukov, whom Alex is trying to emulate.

By describing the battle in West Tyrone as its Stalingrad the SDLP is putting all its eggs in one basket, so to speak. I believe Pat Doherty (Sinn Féin) is going to win and when he does the SDLP will then have conceded in one fell sweep that Sinn Féin has effectively won the battle for the hearts and minds of northern nationalists. No political party should ever allow its future to be decided in one constituency. The use of the Stalingrad analogy/metaphor smacks of desperation and an attempt to galvanise otherwise despondent party workers and supporters.

Having been up this week in West Tyrone, which is one half of the former Mid-Ulster constituency to which I was once elected, I have a number of observations to make. Firstly, Sinn Féin was significantly ahead of the SDLP in the 1997 local elections (32% to the SDLP’s 23%) and the 1998 Assembly election (34% to the SDLP’s 26%). In the most recent by-election last year Sinn Féin dramatically trounced the SDLP.

Secondly, it was generally accepted that in this election Pat Doherty would massively outpoll Joe Byrne of the SDLP and take the seat from Willie Thompson. The SDLP, as it was entitled to do, pushed Byrne aside and replaced him with the high profile Bríd Rogers, with no real hope of her succeeding but with the intention, I believe, of stopping Doherty.

I say this with good reason because if the SDLP really believed they were going to beat Sinn Féin then you would have expected them to match their anticipated high poll and put up a large number of candidates for the council elections which also take place on June 7th. Instead, the SDLP in West Tyrone are putting up just twelve candidates (two less than before) to Sinn Féin’s twenty candidates (seven more than before). If anyone can explain to me how this represents a sign of confidence I will eat Alex Attwood’s baseball hat whilst it’s on his head and he’s running a marathon.

People aren’t stupid and it is for this reason that Bríd Rogers’ intervention, being parachuted in from Upper Bann which she represents in the Assembly, is generally seen as a spoiling exercise against Pat Doherty, who has been actively representing West Tyrone for over four years. The hysterical reaction of the SDLP to the cut-and-thrust of the election campaign, where insults are traded on the street and people on doorsteps tear your literature up, is nothing more than a headline-grabbing attempt at garnering sympathy.

A Sinn Féin election worker in North Antrim has been threatened by the LVF and has had his car burned; a Sinn Féin candidate in Newtownabbey has been threatened by loyalists with hatchets; a Sinn Féin candidate in South Antrim has recently received two death threats (having had his home shot-up twice in recent months) and yet none of these incidents received the type of television coverage that Bríd Rogers’ encounter with a drunk man in Greencastle received. A big part of the SDLP’s election personnel is in the newsrooms of distant Belfast, London and Dublin.

At the end of the day, the republicans are still seen, especially by the media, as the threat, those most determined to challenge and change the status quo. Who really believes the ridiculous Belfast Telegraph poll on voters’ intentions? This week the Financial Times stated that a private poll by the NIO indicated that Pat Doherty was ahead in West Tyrone, but that too is irrelevant. Polls are manipulated and abused, and are as accurate as gossip, though I don’t believe they should be banned.

Finally, next week’s two elections are extremely important to our future and to the negotiations that will take place in the weeks ahead. If you have a vote, use it. Nationalist people marched and were battered into the ground demanding the right to vote. And they came up again and again.

This Thursday unionist domination of Belfast City Council can come to an end through the ballot box. This Thursday can represent another step on the road to freedom.