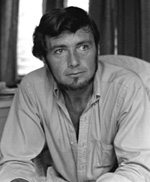 Much of James Leo Herlihy’s fame is as author of Midnight Cowboy, a fine novel which was subsequently overshadowed in 1969 by John Schlesinger’s film of the book, a gritty and bleak, Oscar-winning film that featured Jon Voight (as Joe Buck) and Dustin Hoffman (as Ratso Rizzo).

The film is one of my favourites although it was April 1993 before I actually read the novel. A few months later I read a report in the Guardian that Herlihy had committed suicide at his Los Angeles flat at the age of sixty-six. 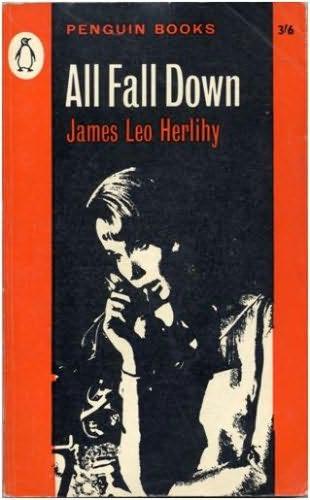 Browsing through the Oxfam shop in Belfast’s Ann Street last April I came across Herlihy’s first novel, All Fall Down, and what a great book it is. In it we hear the voice of the young adolescent protagonist, 14-year-old Clint Williams (who today would be diagnosed with OCD), and his views on his father and mother, and his brother, Berry-berry, a reprobate, who left home and for whom he pines. Clint keeps a record of his thoughts, writing them as quickly as possible into his notebooks. He also eavesdrops on conversations and makes copies of his mother’s correspondence which he secretly opens.

The novel, written in 1960, four years before Midnight Cowboy, is at times hilarious and sad and reminiscent of The Catcher in the Rye (1951) by J.D. Salinger.

Clint refers to his mother (Annabel, who has a seemingly unwholesome obsession with her eldest son, Berry-berry) and his alcoholic father (Ralph) by their first names. He is vulnerable and impressionable. After Berry-berry is located in Key Bonita (the family live in Cleveland, Ohio) it is decided that Clint will go there and try to persuade him to come home.

“Then I had this very peculiar talk with Annabel. She can’t wait for me to get on that bus! Which is completely out of character and I don’t know what to think. Is she having her goddam menopause or isn’t she?

“This book by Dr Wilhelm Levi explains all the weird things women get wrong with them, like frigidity and menstruation and jealousy about not having a penis, and so on. For a long time I’ve been positive Annabel fitted into the part about change of life. But she is not at all thrown about me going to Key Bonita, which is absolutely nuts.

“I tried to stop using those words, nuts and insane and crazy, because I thought I was too intelligent, but I may go back to it and give up psychology altogether…

“Now I’ve got to put something down that I hate… I’m afraid. I’m afraid of the bus ride all alone through the mountains of Tennessee. I’m afraid of all the strange people I’ll meet all the way down there. I’m afraid of Key Bonita. I wish I had a real mean face with scars all over it and everybody was scared of me…

“Maybe going on this trip is not a mistake after all. Ever since I made up my mind to go I have not once masturbated or even considered it. Which is fabulous because there for a while it got so bad I was afraid of getting pimples. At my age, if you get pimples, everybody knows you’ve got this dirty habit, and it’s a big mess. So no matter how black it all looks at times, I’m really lucky as hell about certain things.”

In Key Bonita he learns things about his brother he would rather not have known. A prostitute takes him to bed and he loses his virginity. He returns home to Cleveland, empty-handed, with no Berry-berry, and collapses with a fever. The second half of the book is about his infatuation for a much-older woman, Echo O’Brien, who becomes involved with Berry-berry and the consequences of that relationship. But before that, Clinton decided to commit suicide. In his Notebook he writes to his parents:

I suppose the news will come as a shock, but I have just killed myself and am now lying in the upstairs bathtub. Believe me, I am filled with deep regret over whatever mess this causes, but I have taken certain precautions to make it easy on all of us.

I have locked the bathroom door from the inside so that you would not just walk in without any warning and scream because of the horrible sight. I suggest you get a doctor or a policeman to go up there. The key is ten inches inside of the door. Tell the policeman to bring a small magnet and pull it through this way. Then he can unlock the door and pull out the plug, and all the blood will go down the drain. I have chosen wrist slitting in a warm tub as my method, as it is known to be fairly clean and painless. I am sure the policeman will rinse out the tub if you so request.

“You will no doubt be curious why I have taken this measure, but it is my deepest regret that I cannot divulge the most important motives. It is certainly got nothing to do with your not being perfect parents, which you certainly are, and deeply beloved as well, as you well know. And I certainly did not like making a slave of Annabel during my recent sickness and long before.

“As to my motives for this measure, they are largely secret. I can say this much, however, as my final thoughts, and I hope it will be comfort to you.

“(B) Ralph has always been of such great stature, never acting like a dominating parent who always butts in. On the contrary, I might say that as an excellent companion and friend, he knows no peer, and with highest principles which he lived unfailingly up to at all times. (Re-work this.)

“(C) Annabel has been likewise ideal in different ways, such as big things like seeing to it we are all comfortable and well fed, including small things not usually noticed, such as sewing buttons which is nevertheless tedious and has to be done. Also, Annabel has always tried very hard to do what is right and see to it we all did likewise, which may have resulted in confusion at times, but this is very admirable.

“(D) In conclusion, it is certainly not that I did not have a wonderful life with such two parents, I am merely miserable for private reasons and have been meditating in my room on these matters. It is now clear that I must go to invisible experiences such as one has in deep dreaming, so do not think of me as dead in any way in spite of the mess in the bathroom which may tempt you to believe otherwise. Which incidentally I have also heard of the Fire Department being called in such cases as this.

Your ever loving son and offspring,

The he writes: “I’m really none too proud of this letter. In the first place the style of it sounds smart alecky, and there ought to be some synonym for blood. Now that I see it on paper, the whole idea is just too creepy and would probably bring on heart attacks or worse. You would think science would come up with a pill that does away with embalming and all the expenses of burials. Which could also be fabulous for capital punishments and many other uses.

“Besides I am getting curious about this Echo O’Brien who I get the very definite impression is a virgin, even though middle-aged, and is coming to visit from Toledo. She is apparently so car-crazy there is a good chance she will turn out to be a Lesbian or a morphadite, so why shouldn’t I wait and get a look at her first, as there is always time for suicide at a later date.”

Of course, when Echo comes and visits she creates a mighty presence in the house. When she meets Berry-berry it is easy to see what way the wind’s blowing. Clint, for all his infatuation is prepared to accept what is going on between Berry-berry and Echo but as events unfold he gets to see a darker side of his brother that profoundly changes his attitude to life and love and hints at even darker secrets. 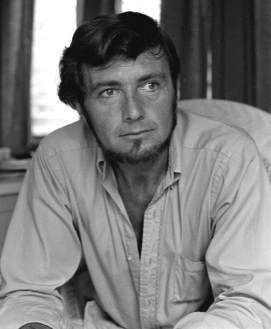