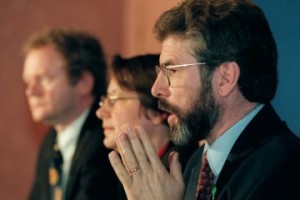 Fifteen years ago I covered for The Guardian and the Irish Examiner the negotiations which led to the signing on Good Friday of the Belfast Agreement. This is the feature I wrote (though slightly amended in The Guardian).

Letitia Fitzpatrick from Ulster Television says to me, “I am so thirsty. Would you?”

“Okay”, I say. “Once more I’ll trudge off and get you coffee.” It is 11.55 pm, Stormont, Government Buildings, and at midnight, if the parties to Senator George Mitchell’s talks haven’t agreed and gone home, they’ll all turn into pumpkins. Just at midnight I arrive back into the press conference hut with the coffee. Behind me the aroma has seemingly attracted several suspicious-looking men in suits, some more in denim jackets, and, to my left, women with non-Catholic perms. Then I hear the booming voice of Ian Paisley and realise that I am at my first DUP press conference and have no flak jacket.

“Why didn’t you use it for two years!” shouts a man to my left.

“The people wanted you in here to fight for them. You wouldn’t do it! You hadn’t got the balls!” shouts a man to my right.

“You’re not pressmen,” declares a most perspicacious Mr Paisley. “You belong to parties that are opposed to my party, so just shut up!”

“Your days of telling people to shut up are gone!”

“Yeh! You don’t even care about the people. You don’t give a shit, with your big fucking house!”

Uh-oh. I’m now in the middle of the UDA.

“You are all fascists! Adams’ lovers!” shouts Ginger Spice at me and them, and which is partially true. At any moment I am awaiting them to zero in on the common enemy – me, the Armalite-and-Ballot-Box-Kid – but the division between them is palpable. And where now is Paisley to go, because his muscle, the people who accuse him of rolling the snowballs for them to throw, back in 1972, back in the DUP/UDA strike of 1977, are no longer with him, but have their own representatives here in the talks. Unionism in change is dynamic: Unionism is interesting.

Earlier in the evening we were told by Tony Blair’s coiffeur, Alistair Campbell, described affectionately, I think, by one British newspaper as the Spindoctor-General, that the deadline of midnight is having a powerful effect of focusing the parties on concluding. He is received by journalists from London with just a teeny-weany bit too much sycophancy for my liking. Two hours later and no one from the government is telling us what is happening, though we have had Sinn Fein’s Mitchell McLaughlin come out and declare bleakly that there is no agreement because unionists are blocking the agreement.

Time passes. The press people get bored. A woman runs in. “There’s a rumour that Sinn Fein are walking out!”

An hour later a journalist from Dublin says, “Heard anything?”

“Can’t say, but just wanted to check if anybody had a better rumour than me.”

Some people are reading, others are snoring. I asked Letitia to name her favourite film, favourite book, favourite song and favourite poem, and at the prompt of the latter she launches into Eliot’s ‘Journey of the Magi’:

A cold coming we had of it,

Just the worst time of the year

For a journey, and such a long journey:

The ways deep and the weather sharp,

The very dead of winter…

It was an eerie rendition, given our circumstances.

In one of the press huts I met with Frank Millar, London Correspondent of the Irish Times. Years ago we couldn’t speak to each other because he was the general secretary of the Ulster Unionist Party and I was the National Director of Publicity for Sinn Fein. But now that we were covering the talks for newspapers we had a cover for talking. People have to talk – it is the way forward.

As the night progressed the rumours that Sinn Fein was feeling shafted by the SDLP and the Dublin government increased to the point where I was predicting that Sinn Fein could not go along with the re-negotiated Mitchell paper, which also proposed an Assembly (probably based at Stormont).  Sinn Fein, an abstentionist party in the North, is implacably opposed to a return to Stormont, because of its connotations of sectarian, ‘majority’ rule, its de facto recognition of partition. Yet, Sinn Fein had contributed to the Mitchell paper and made amendments to it, proposals to which it has to remain faithful if it is to be consistent. The biggest difference between Stormont and the new Assembly is the crux issue of consent: the combined strength of Sinn Fein and the SDLP gives the nationalist community a powerful veto. Can Sinn Fein adapt to this fairly scary, new challenge and, if so, can Sinn Fein persuade its supporters that there is a case for entering a parliament in the North?

Driving up to Stormont on Thursday was a strange experience. But, confession to make, it wasn’t my first time there. I took my seat a long time ago. The summer of 1962, to be precise. My father took my two older sisters and myself on one of those bus tours around the city that included a visit to the Stormont Parliament, which was a wholly uncharacteristic act for nationalists back in those days. During the fifty years of one-party unionist rule at Stormont, nationalists initiated one single piece of legislation – an Act for the Preservation of Wild Fowl! I sat in the speaker’s chair. All I can remember is the smell of leather and pine.

In 1979, when editor of An Phoblacht/Republican News, much to the horror of the NIO press officer, David Gilliland, I got past several RUC security checkpoints and into Stormont Castle, thanks to Peter Fearon of the Press Association, a wild and lovable man. He brought me into a press conference where the late Humphrey Atkins, the Secretary of State, was announcing a new initiative, a round-table conference. A month earlier the British government launched the Lancaster House talks between Robert Mugabe’s outlawed Patriotic Front and Ian Smith’s National Party. I asked Atkins what was the difference between the Patriotic Front and the IRA, and shouldn’t the government be talking to the Republican Movement to end the conflict. He replied, “Don’t be ridiculous!”

I wasn’t allowed to ask another question but an American reporter repeated my question. Atkins hesitated, stuttered and said, “I…I…I don’t know what the difference is,” after which the press conference erupted in laughter. For helping me Peter Fearon didn’t remain too long at the PA! He moved to New York, where he still lives and works, and found infamy. Tom Wolfe in ‘The Bonfire of the Vanities’ based the character of the English journalist, Peter Fallow on Mister Fearon.

It’s fine going to Stormont for a stunt, but would one’s attendance there, as a republican, copperfasten partition, undermine one’s republicanism or, could it, through example and reconciliation, undermine the sectarianism and opposition to Irish unity of one’s erstwhile opponents? Who knows?

By 4 am those of us still alive are watching James Cagney in ‘Public Enemy’ followed by a programme ironically titled, ‘Living With Violence.’ This vigil reminds me of barricade duty back in 1969, when you wished that the loyalists would hurry up and attack so that you could get it over with and go to bed. Bored out of his mind, one hack begins singing, to a Dr Hook air, the words, “If I said I had a Cross-Border body would you hold it against me…” Several other appalling plagiarisms follow.

There is a new rumour that Sinn Fein is preparing to walk out. Then, at 7.10 am Mitchell McLaughlin arrives to read out a short statement but not to answer questions. In confident tones he declares that Sinn Fein has, during negotiations, clawed back a considerable amount of ground which it believed had been lost earlier. Suddenly, the atmosphere changes. There is no rush of Ulster Unionist MPs out to contradict him. The impossible begins to seem possible. Everyone is in great form. There is a buzz. This could genuinely be a new beginning. Of course, there are still problems. Of course, there are issues outstanding, and we can forget about it all if Orange feet get marching down Garvaghy Road this July.

In late afternoon the document has still not been finalised. There are rumours of dissent within the Ulster Unionist Party.

But as I drive out of Stormont, past the statue of Lord Edward Carson, down Prince of Wales Avenue, I feel that something fundamental has shifted. My view of East Belfast is always from the west of the city, my home. Stormont lies in the Castlereagh Hills, foreign. On this evening, I look from this Avenue across to Black Mountain above West Belfast, distinct and familiar, and realise that it is not that far away, after all.