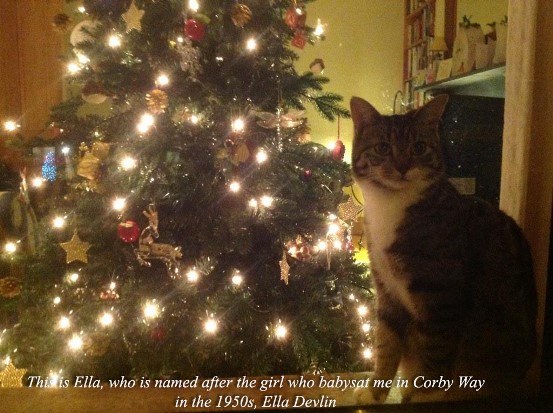 Books, glorious books! Spoilt rotten by Santas. From my beloved I got 1941: The Year That Keeps Returning by Slavko Goldstein, who was born in 1928 to Jewish parents in Sarajevo. His father kept a bookshop but was arrested and disappeared and then murdered by the Ustashe. Goldstein himself became a partisan. Got Belfast Noir and Dublin Noir by my friend John Lynch. Roddy Doyle’s book of short stories, Bullfighting, from Gerry Adams. And Richard Flanagan’s The Narrow Road To The Deep North from my friend Niamh.

23rd December. On BBC Talkback panel with Alex Kane and Brian Feeney, hosted by William Crawley, about the Stormont inter-party talks. Whilst on air we get news of possible breakthrough and agreement.

19th December. On BBC Talkback panel with Alex Kane and Brian Feeney, hosted by William Crawley, about the Stormont inter-party talks from which British PM David Cameron made a quick exit

18th December. Interviewed about the history of Féile an Phobail by Adrian Devine, a lecturer at the University of Ulster who is writing a chapter for a book entitled ‘Managing and Developing Community Festivals and Events’.

Interviewed by Dr Máirtín Ó Catháin, Lecturer in Modern Irish and European History, at the University of Central Lancashire, about republicans and family history and the extent to which a family history of involvement with the Republican Movement has an influence on individuals and what impact family history has generally on republican activists.