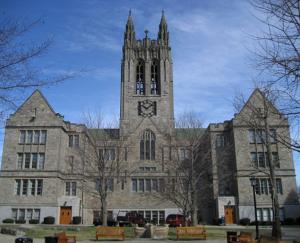 Wrote a piece about the Boston College’s flawed archive on the conflict, which was produced by two people hostile to the Republican Movement given carte blanche, Ed Moloney and Anthony McIntyre. The feature was published in today’s Irish Voice in the USA. – link here.

As the legal case by the US Department of Justice, on behalf of British authorities, to subpoena and recover recorded testaments by former IRA activists who participated in the Boston College Belfast Project continues, it is worth looking at some of the claims and counter-claims.

On the defensive is Boston College’s Thomas Hachey (executive director of the Irish Studies program), Ed Moloney (Project Director) and Anthony McIntyre (who conducted the 26 interviews with former IRA Volunteers). One argument they have made is that if the subpoena is successful it will have a serious negative effect on the practice of oral history generally, which is only partially true as I shall demonstrate.

But Moloney has also ridiculously claimed that there is a “possibility that the IRA could abduct and torture [McIntyre] to learn the names of others who co-operated with the Belfast Project”. This is patent nonsense because McIntyre for the past 15 years has spent his writing life ridiculing the IRA and Sinn Fein and none expressed any fear of IRA retaliation when Hachey penned a glowing introduction to Moloney’s tendentious book ‘Voices From The Grave’, based on interviews McIntyre conducted with former IRA Volunteer Brendan Hughes, the whole thrust of which according to many respected historians, reviewers and commentators was to undermine Gerry Adams and republican involvement in the Good Friday Agreement.       Lately, the pair, invoking patriotism as a last refuge, hilariously claimed that the release of the material “could be immensely destructive to the peace process in Northern Ireland” and could damage Gerry Adams!

We only need to read their published writings to see that Moloney and McIntyre were never innocent historians or researchers.

This project would have been of immense value to oral history and learning from the past had it adopted a few simple principles. Instead, it was poisoned from the outset and Boston College and Thomas Hachey facilitated this skewed version of the past. Did Hachey ever ask why scores of pro-peace process republicans, prominent in the struggle, were never asked to participate?

The organisers and some participants provoked this court case – though we have a duty to defend the confidentiality of the archive though not alone on the spurious grounds suggested by the organisers. Moloney’s book names certain republicans as having been involved in certain killings. One of the interviewees, Dolours Price, in an unguarded newspaper interview, apparently repeating what she had confessed to McIntyre on tape, also speaks about at least three killings.

Did Moloney ever consider the rights of these relatives of victims to go to the PSNI and the Historic Enquiries Team and demand action?

Where was his concern with ethics when he acted as judge and jury to slander and implicate other republicans without giving them a chance to defend themselves or respond to the allegations? To have asked them for their oral history memory would have required a bit of work and might well have undermined Brendan Hughes’s account so substantially as to have rendered him an unreliable witness.

The legacy of the conflict and what happened during the conflict and which party or parties bear major responsibility for the conflict, and who won this or lost that, are arguments heavily contested. They are played out in political debate, in newspapers, in memoirs and biographies, but with some recognisable semblance of cut and thrust and fair play.

In West Belfast the Dúchas project has been collecting oral histories for some time (including, from combatants) and has made many of its interviews available. For a humble community organisation the project would appear to have higher ethical standards than that of Boston College. Participants are interviewed on the basis of ‘informed consent’; that they can delete things with which they are not entirely happy; and that they know that what they say is going to go into the public arena for scrutiny during their lifetime and they are responsible for their own story. They talk about their own lives rather than implicating others (including former comrades)

But when we come to Boston College we have a distorted project. I do not believe that the central aim of those involved is to have Adams arrested and prosecuted but only to punish him through embarrassment and calumny, because the evidential worth of the archive is only hearsay against Adams.

However, where other participants’ contributions involve incriminating confessions about acts for which they have never been prosecuted (and Dolours Price’s putative interviews about kidnappings and cross-border executions is a case in point) then questions have to be asked of Anthony McIntyre, Ed Moloney and Thomas Hachey and the Boston College with whom the buck ultimately stops.

I think the case of total irresponsibility and interview bias against McIntyre and Moloney has been well made and needs no rehearsing. But what of Boston College? On what precedents is it relying to defend not handing over the tapes? It cannot rely on the fact that it promised the participants confidentiality because that was never within its gift and it should have warned the participants of the risk.

The college cannot claim journalistic privilege about sources because the tapes themselves, proffered to the college, identify the sources (they are not shorthand scribbles or anonymous IRA interviews in which the voices are unidentified which McIntyre can refuse to identify).

The College can reasonably claim that the successful seizure of the tapes will deter anyone else, anywhere else in the world from participating in a similar project. But, again, in allowing Moloney to precipitously publish the book upon the death of Brendan Hughes for short-term gain (the embarrassment of Adams) the college exposed its bias and major short-comings. Not too many were thinking of the value of the project – or the imperilment of the project – when the first reviews appeared, were they?

Once the book was published, once Dolours Price said what she said, the families of the victims were bound to kick up a storm and elements of the British security establishment were either bound to exploit the opportunity or were compelled by families to take some action.

Apparently, no one is responsible for this debacle! Ask McIntrye or Moloney who is to blame and they blame everybody but themselves. Meanwhile, Hachey is scrambling for a good defence.

Would Thomas Hachey consider as a defence the innocent people who will be incriminated? That is, those of us who have been named as involved in this or that but to whom the allegations were never put for rebuttal by Moloney or McIntyre but simply lodged in Boston College as a time bomb? As one of those slandered by Brendan Hughes and, more recently, scandalously linked to a 1975 sectarian killing by McIntyre, possibly inadvertently quoting one of those he interviewed and thus breaching the supposed sacrosanct embargo, I believe we have some rights.

But such a motion would involve an admission that the whole process was flawed from beginning to end.

To thwart the PSNI and the subpoenas, I suggest that the participants withdraw the tapes – unless Moloney and McIntyre never gave them that option? Back in Belfast, having been briefed about ‘informed consent’ the participants could then release the tapes if they wish or publish books, knowing, of course, that they are in the same boat as those they implicate.

History could then judge them and their claims.

What could be simpler?