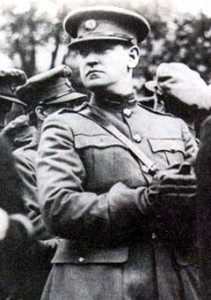 I wrote a piece about Béal na mBláth commemoration in West Cork yesterday which was addressed by Fianna Fail minister Brian Lenihan. The piece was published in today’s edition of the Andersonstown News:

To the right of de Valera’s headstone in Glasnevin Cemetery hung a few forlorn and wilted red roses at the end of scrawny stems. Across the way, at another grave, there were six vases overflowing with tall fresh flowers of vibrant colours, and along the surround several new wreaths had been placed just that morning, one of which said, ‘In Loving Memory Of Michael Collins’.

George McCullough (originally from North Belfast but whose mother comes from Beechmount Parade) is the Chief Executive of Glasnevin. During our wonderful tour, last month, we visited, amongst others, the graves of Thomas Ashe (the first republican to die on hunger strike), O’Donovan Rossa, Harry White and Dáithí Ó Conaill, another hunger striker and former vice-president of Republican Sinn Féin.

The last time I had been in Glasnevin was in May 1989 at the funeral of my Uncle Harry, a veteran republican who had once been sentenced to death. Despite our political disagreements (mainly over the ending of abstentionism) we remained close and his house remained one of my billets which is why I despise Ed Moloney’s book ‘Voices From The Grave’ where he quotes Brendan Hughes claiming that Harry threw me out of his house, something which never happened and is a slur which Moloney didn’t have the courtesy to seek from me a response.

As we stood in front of Collin’s grave, overflowing with flowers, George McCullough said: “it’s the same every week, the floral tributes left here almost swamp Collins’ grave and tower over the inscription.”

So, make of that what you will.

A sign of maturity is honesty and to achieve honesty one must be prepared to revise in the light of experience and learning.

A sign of maturity was the decision by the organising committee of the annual Béal na mBláth commemoration in West Cork, an event associated with Fine Gael, to invite Fianna Fail minister Brian Lenihan to deliver yesterday’s oration at the spot where Michael Collins was killed eighty-eight years ago in an IRA ambush.

It was not without controversy or protest. Senator Liam Twomey (who is still in shorts, having only joined Fine Gael four years ago) has objected to Lenihan because his “predecessors had murdered Michael Collins”!

The use of such language represents an outrageous throwback to dark and overwhelmingly tragic times.

Brian Lenihan’s grandfather, had, in fact, been on the Treaty side (that is, on Collins’ side). And Fianna Fail was actually founded four years after Collins’ killing when de Valera had split from the IRA and Sinn Féin in 1926, seven years before the founding of Fine Gael. Of course, roughly speaking, both parties’ roots and differences can be traced to the split in republicanism in reaction to the truce and treaty which gave rise to the subsequent civil war in which Collins and many republicans lost their lives.

Senator Twomey was rightly and comprehensively condemned by a variety of opinion and people who can at this historical remove view in the round the legitimacy of the convictions passionately held by both sides in 1921/1922.

In ‘The Irish Revolution And Its Aftermath’ Frank Costello writes: “the weight of historical evidence leads to the conclusion that the War of Independence indeed led to a greater degree of Irish freedom than that offered by the Government of Ireland Act (1920), and certainly beyond that offered by the false promise of Home Rule.”

Currently, dissident republicans are waging a campaign to undermine that which after a long struggle and much sacrifice has been achieved – “a greater degree of Irish freedom” than went before.

I grew up, politically oppressed, second class, in what we derisively called the ‘Orange State’. I live in the same place but if it is no longer the state I grew up in. It has been transformed and, if anything, it is ‘Green and Orange’ (with a waxing neutral white!) and by that I mean that there are no impediments to a nationalist or republican attaining office in any category in the land. Indeed, we might even see former IRA leader Martin McGuinness elected First Minister in 2011.

True, we still do not have a united Ireland but I do not feel vanquished. I feel confident, self-assured and invigorated by real change within unionism – even small things like Ian Paisley Jnr appearing on the Falls Road in a debate two weeks ago and being rapturously applauded.

Are the DoE workers, from Aughnacloy to Derry, under Minister Conor Murphy, actually Third Paras tarmaccing a British road in Ireland?

Sinn Féin, with the largest mandate in the North, is administering Irish rule for Irish people in a part of Ireland, not in the shires of England, under the maximum possible circumstances.

When you point out to dissidents that they have no support they retort, “the same was said about the Provos at the start”, which is true, but in entirely different circumstances.

Actually, if they follow through their ‘Provo’ analogy – not that they can ever hope to replicate the potency of the IRA campaign – what the Coca Colas (or whoever) face is eventually having to compromise, having to work out how to release from prison young people they convicted by their melodramas. Remember, one of the IRA’s demands from the British was an amnesty for all political prisoners – a call I have yet to hear in dissident discourse.

Yes, dissidents will eventually face the prospect of having to compromise.

Which is exactly what Michael Collins felt he had to do. Would Collins have signed again had he known about the misery that the treaty (partition already a fait accompli) would bequeath to the North, had he known the magnitude of the civil war and the bitterness engendered?

Who knows what he felt his measured choices were.

But one does get a sense that he is not turning in his Glasnevin grave, that he would understand and would not regret that ‘his murderers’ (according to Twomey), his former friend and comrade de Valera, would step into the space that he, Collins, had made possible in life .. and in death at Béal na mBláth, eighty-eight years ago yesterday.