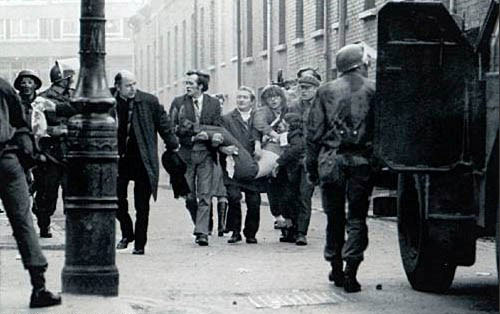 After the publication of the Saville Report many letters appeared in the Irish Times, including one by a Niall Ginty, attempting to draw attention away from the British government and the Paras. A letter I wrote in response was published in that paper on 24th June.

Madam, Niall Ginty (June 18th), commenting on the Bloody Sunday Report, tosses out statistics alleging that the IRA killed more than any other organisation during the conflict, and that if there is “a process for all victims” then the inquiry should begin with the IRA.

Whether intended, the effect of his comment is to excuse British paratroopers and divert attention elsewhere.

I am not sure where Mr Ginty has been living and whether he has heard of Mountjoy, Portlaoise, Crumlin Road or Long Kesh. Several thousand republicans served lengthy sentences in prison for IRA activities whereas the British state protected its killers and continues to do so and not just by granting the paratroopers anonymity.

The statistics Mr Ginty quotes are, in fact, wrong. Sir John Stevens spent fifteen years inquiring into allegations of collusion between British agencies and loyalist paramilitaries. The public was promised the truth. Instead, Stevens was only allowed to publish 17 pages out of his 3000-page report. It is clear that the UDA and UVF were little more than armed wings of British forces. The numbers they assassinated, added to those killed by regular forces, is a higher figure than that killed by the IRA.

But to argue in this way, as Niall does, is fallacious. If Vietnamese insurgents killed more people than US forces that still would not have made the US morally superior in that conflict. Niall juggles with figures for propaganda reasons.

Even when IRA Volunteers, such as those arrested in Balcombe Street, London, in 1975, told British police that they had carried out the Guildford and Woolwich bombings in 1974 and that the wrong people had been imprisoned, the British state kept the Guildford Four in prison for another fifteen years, rather than admit to having got it wrong.

In my own case, I was lured to a house by a British agent working inside the IRA. Against this man there are serious allegations that he was involved in murdering people at the behest of British intelligence (deaths which are part of the “IRA” statistics that Niall relies on). I was sentenced and served eight years, some of my co-accused twelve years. It took us twenty years to have our convictions overturned only for the British state in 2009 to issue a Public Immunity Certificate hiding the reasons for our convictions being quashed. It continues to protect the man involved.

Had the British government on 1st February 1972 admitted what Saville in 2010 declared had really happened on Bloody Sunday then Ted Heath’s government would have fallen, there would have been a crisis in Britain, paratroopers would have faced life imprisonment and, in all likelihood, Britain would have been propelled much more quickly down the road of negotiation instead of fighting a dirty war. Thousands of lives might well have been saved.

It cost £200 million and 38 years to get the truth because Britain lied. Here, still no inquests have been held into those victims of RUC shoot-to-kill in 1982. Judge Peter Corey’s recommendation of a transparent inquiry into the assassination of human rights lawyer Pat Finucane twenty one years ago has been set aside and the British government has legislatively re-written the terms of any future inquiry to its advantage.

Perhaps that explains why Mr Ginty only wants to talk about the IRA.