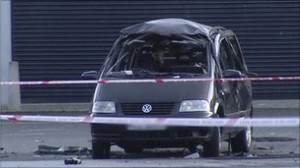 There was a bomb on the Antrim Road, Belfast, last week intended to kill members of the PSNI. It did not go off but many families had to leave their homes for up to three days. Not one person interviewed in the media supported or excused the potentially lethal attack. Indeed, the attack was overwhelmingly condemned. In response I wrote this feature for the Andersonstown News, for the edition published today, 31st January:

Many people, often people one would never have envisaged doing so, have climbed out of the trenches and crossed the metaphorical No Man’s Land to talk peace, to shake hands and begin the work of repairing the damage inflicted during the conflict. Nevertheless, there are still individuals stuck in the trench, including Yvonne from South Belfast.

Not that Yvonne doesn’t have a grievance. In September 1992 the IRA planted a huge bomb outside the forensic science laboratory in Newtownbreda, destroying the building but also damaging nearby homes. Hers was one and it was a year before it was made habitable.

Last week an anti-personnel device planted on the Antrim Road led to local disruption for several days. There was a storm of protest from residents and the incident received wide media coverage.

The best was on Wendy Austin’s Talkback on Radio Ulster. She interviewed people who had been forced out of their homes, a journalist who quoted the dissidents’ own words that they knew they could not mount a sustained campaign (an admission of defeat, if ever I heard one) and Gerry Kelly, Sinn Féin MLA for the area.

Kelly described the attempted bombing as an attack on the peace process but stated that it required “more than just a security response” and that the objectors needed to politically realise the futility of their actions.

“When they [the dissidents] have put up candidates notionally connected to them they have been rejected,” said Kelly, reinforcing his point about their lack of support.

Yvonne was incensed when she heard Kelly and she immediately got on the phone.

“Gerry Kelly has a cheek, has the nerve to come on to your show and talk about bombers. Sure he was a noted bomber, a professional bomber. I mean I don’t think he would have left a bomb on the Antrim Road that didn’t go off. And it makes me really mad when I see him. As for the ones they have up in Stormont, they shouldn’t be there, they should be in jail… I could choke Gerry Kelly and Martin McGuinness… and do you see Paisley I would take him out too and throw him away because he’s not worth a dime.”

Yvonne represents that parallel universe which is convinced that in the North essentially nothing has improved but that things have become worse. Republican dissidents hold the same opinion, but from the opposite direction. Now, clearly, both can’t be correct – though, demonstrably, in the real world, both are absolutely wrong.

Robert phoned Talkback to state that he entirely disagreed with Yvonne.

“Before people like that lady make statements like that about Adams, Kelly and McGuinness, they should think, what was the part of my community, what did we do for 80 years that they rebelled to take up the gun to get their civil rights?”

Robert said that “the rest of the world recognises that there was a major problem here because they agree with the fact that McGuinness and others are in elected government as of right… representing half of the population in the North, literally. Any reasonable Protestant, and I know many of them, and I love them dearly, agree with that position.”

Yvonne was having none of it. “I think that man is talking a load of nonsense… They’re nothing only terrorists, they’re still terrorists. How many policemen have they shot, how many army? That many is an absolute fool… is as bad as Adams, McGuinness and Kelly.”

Robert robustly defended his position: “You cannot deny historical fact… One community was completely, totally and absolutely excluded… the situation was completely wrong and came about through injustice. One community was totally unjust to the other. Of course, shooting, killing and bombing happened, but it didn’t all happen on the one side. I’m not defending the IRA, I’m not defending the British army. I am an ex-soldier myself, in fact.”

The phones were now hopping and, encouragingly, most where on Robert’s side. Mervyn rang to say that unionism has come a long way, “and thank God for it. But there is something we have forgotten and we tend to forget it quite intentionally.

Of course, all three callers could have been impersonators, but their voices had the ring of authenticity and I believe that each was honest. But there was another surprise in store. Mervyn hadn’t finished.

“Only a few days ago up in Belfast, I met a couple of my old colleagues in the UDR. I served for almost 10 years, both part-time and full-time. One of them was a severe hardliner. He’s no longer like that. He shares my opinion… I have no disrespect for the lady, Yvonne, but it’s just that she has forgotten what happened. I don’t want a united Ireland but I am coming to terms with the fact that what happened to the Catholic community was nothing short of disastrous, an ultimate disaster in Northern Ireland.”

You plant a bomb to kill members of the PSNI, to create a crisis in government, particularly for your former comrades (who represent the voices of more republicans than you), and to drive a wedge in a consensus about the way forward which has united more people in Ireland than at anytime in Irish history.

And all you have managed to do is unite former soldiers, UDR men, loyalist paramilitaries and former IRA activists. But all is not lost – at least Yvonne from South Belfast agrees with you.