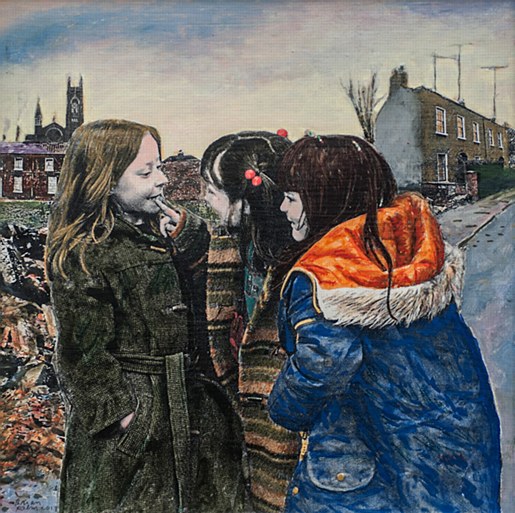 This is about Brian Palm, Stano and Rudi, so stick with the route, however circuitous!

A few months ago I finished writing my play Inmates about characters in an old people’s home, present-day Ireland. The play grew out of the final chapters of my novel Rudi and I built a back story for the characters in the nursing home Rudi has been admitted to for respite.

Hopefully, the play will be staged in 2018 – organising the transition from page to stage is the part I dislike most.

Anyway, Rudi plays the harmonica, and he is a good harmonica player!

Last year I met an artist and composer, Stano, who has his own recording studio in Whitehall, Dublin. He invited me to participate in his storytelling project, In Between Silence, which to date includes contributions from Theo Dorgan, Roddy Doyle, Anne Enright, Paula Meehan and Aidan Gillen, among many others. You tell an autobiographical story against a back track of music previously composed and recorded by Stano and what results is an incredible synthesis. In a feature about Stano Hot Press magazine said: “Lyrically and philosophically, if Sam Beckett was around today, I’d say he’d fancy a spell in the studio doing spoken word with Stano…”

What I recorded was, The Story of Danny’s Caul – which must remain enigmatic until you hear it someday, somewhere!

A selection of the recordings will be presented in a unique film format devised by Stano at New York’s Annual Festival of Irish Theatre in two weeks’ time.

Over coffee with Stano and his colleague Denise Dunphy last summer I mentioned my play and Rudi and the fact that I needed harmonica recordings. Stano said, “I have the very man for you!”

Brian Palm is an American who has lived in Ireland since 1977 and plays harmonica in the brilliant Mary Stokes Band.

And so Brian Palm became Rudi for a time through his recordings of several pieces of music that feature in Inmates. Not only that, but Brian, after reading Rudi, composed some additional expressive pieces about this old man of the world. I will be delighted to see them used in the production of the play.

As well as being a musician Brian is a highly successful artist and much of his work is about the contemporary cityscapes of Dublin. He says:

“I have attempted to document the massive changes that have taken place in the city of Dublin during the past twenty years physically, spiritually and emotionally, and have commented on what I found. The figures that inhabit my paintings are often the most vulnerable and marginalised members of society; the poor, the elderly, children. Lost in contemplation, oblivious to the viewer, they go about their daily routines amid the rapid developments engulfing them and their community… While addressing serious issues, I would like to think that my paintings leave the viewer with a positive sense of optimism, resilience, and affirmation.”

You can view examples of Brian’s incredible urban themes here. The painting featured above is called The Loose Tooth.

And you can get a flavour of the music and the theme of mortality with this excerpt from September Song.