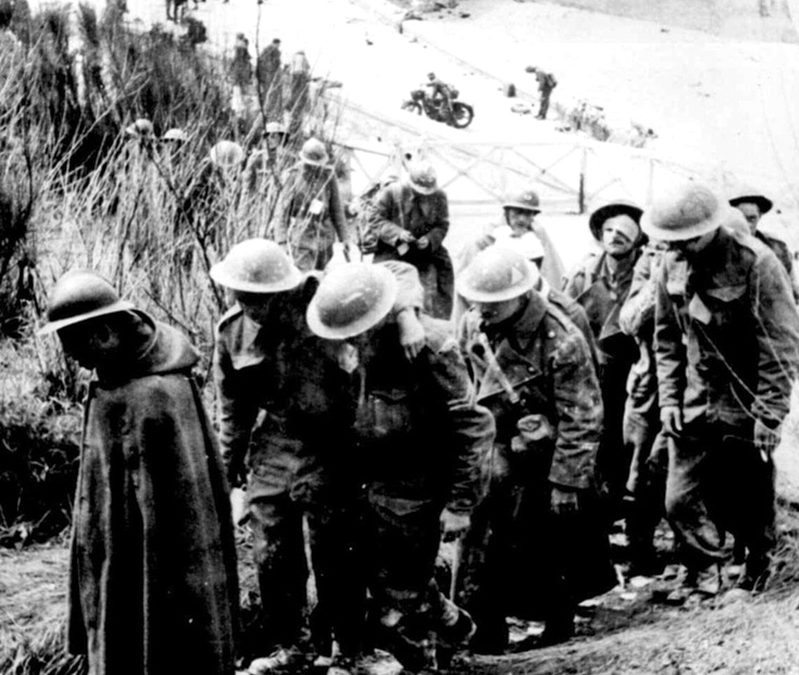 George McCool was captured by German soldiers at Dunkirk. Twenty years ago, I interviewed the Derry man at his home in the Waterside. George, a Catholic unionist, who described himself as ‘a bit of a royalist’, incredibly, lived in Derry’s Creggan throughout the Troubles whilst being a Sergeant Major in the Territorial Army.*

The interview was published in the journal Force 10, and later I fictionalised George’s story in my novel Rudi. I’m going to see the film Dunkirk later today thus my posting this feature which is not just about Dunkirk but about the life of a soldier.

Despite being eighty-four-years of age and suffering from angina, George McCool still looks a tough skin. He was born in the nationalist Brandywell but his loyalties always lay elsewhere.

“All you could hear in the house was ‘Army, Army, Army,’ from my father. He and his brother were in the Boer War with the 27th Inniskillings. My father fought in the relief of Ladysmith and won battle honours. I left school at thirteen and worked in Austin’s clothing department as a message boy. But a young man of 18 wants adventure. He’s not worried about politics or anything else. I joined the army for adventure. 15th March 1933. Royal Inniskilling Fusiliers, Second Battalion. Quite a lot of the boys from the Brandywell were in the army, maybe 30 or 40 from Derry alone.”

He says that the Inniskillings, which were formed after the Battle of the Boyne for the defence of Derry and Enniskillen, have ‘a terrific history’. The proudest moment in his life came in 1953 when he was part of the guard of honour for Queen Elizabeth upon her accession to the British throne.

But his first taste of soldiering was in the mid-Thirties when he patrolled the Yangtze from his base in Shanghai upriver to Chungking on the lookout for communists, a journey which took six weeks.

“As well as a soldier I was a bit of a singer in my day! I remember singing The Rose of Tralee and Where the River Shannon Flows at the regimental concert in Singapore.” 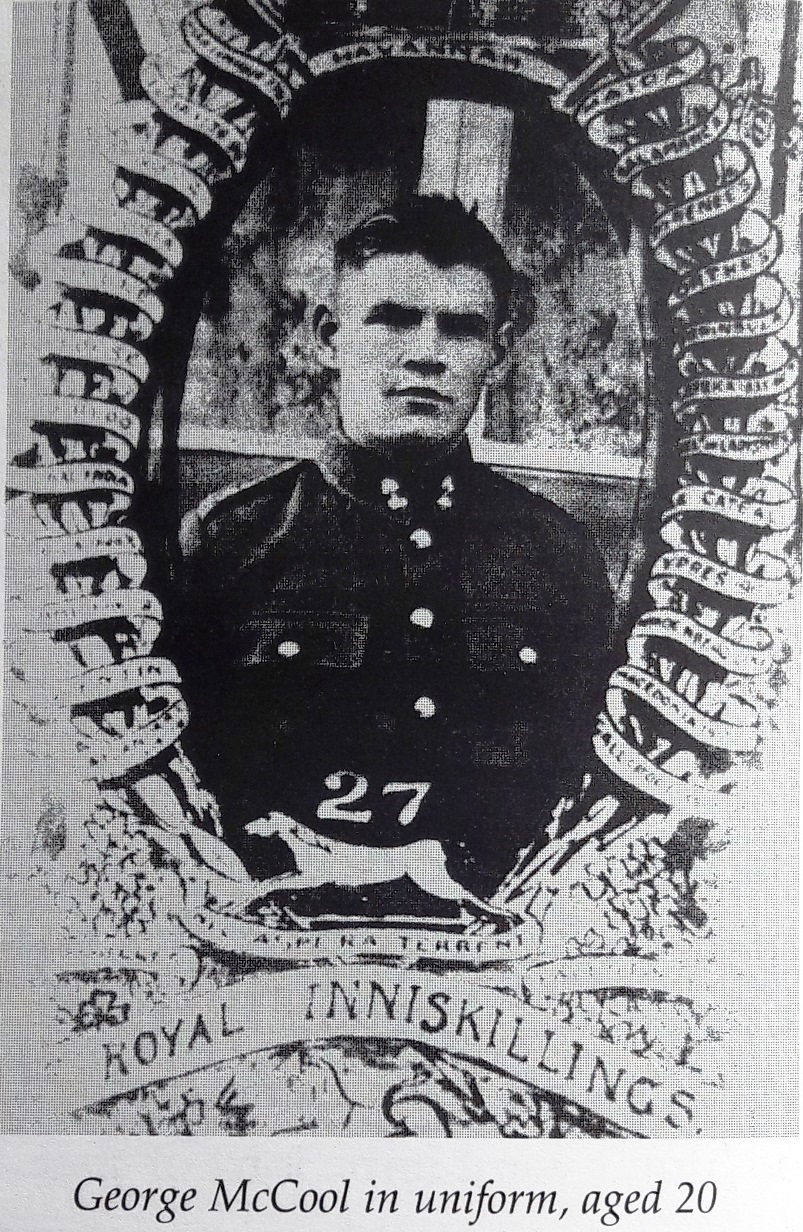 He was back in England in September 1939 when war was declared.

“I was in the canteen of Catterick camp on that day and I heard Mr Chamberlain on the radio. We were shipped to France – around Arras and Amiens. Hitler’s army invaded Belgium. 10 May 1940. We entered Belgium to try and stop him but it was an impossibility. When the Belgians surrendered our Brigade was left fighting three Divisions. Only for the Inniskillings there would have been no evacuation of Dunkirk. A whole Battalion was sacrificed. We were being bombarded and exchanging fire. We counter-attacked but were surrounded in a woods. I was taken with the commanding officer. 27 May 1940.

“We had to throw our weapons down. It was a rare feeling being taken prisoner. Demoralising. Most of the boys who were taken with me are now dead, including my best friend, Bobby Cotter from Ballymena. We were force-marched for three weeks, up through Holland. You were afraid to go into the bushes to the toilet because the Germans would just shoot you. We were given one loaf a day between five men and were starving. We were put on a barge and taken down the Rhine, then packed like sardines into a sealed train for Poland. It was summer and the train was hot and stinking.

“Some days later the doors were unlocked and we were kicked and hit with rifle butts. We were in a place called Thorn in the Polish corridor and were registered as POWs and given tags to wear. My number was 12316. One very cold day I and a boy called Campbell who was badly wounded in the leg were sent for interrogation. Campbell’s brother was an IRA man in Belfast and was at that time interned on one of those prison ships outside Belfast. I told him not to mention that. This German officer spoke perfect English, gave me a cigarette and asked me where I came from. I said, ‘The Brandywell.’ ‘That’s a good nationalist area,’ he replied. I said, ‘Excuse me, sir. All I want is to get out of here and back to my hut. You are not going to make any inroads with me.’

“The bastard took the cigarette from me and sent me back! But a week later he sent for me again and offered me parole because I was Irish and said that I could go out and work in a factory. ‘No way,’ I said. None of us took the offer.

“The first two years in Stalag 13 were the worse. We were still in the clothes we’d been caught in, were lice-ridden, had no boots only clogs. Some prisoners were shot trying to escape. I knew one boy, Christy from Australia, who’d been taken prisoner in Africa. He was shot dead. We buried him in the camp. Some committed suicide and some died of poisoning after drinking wood alcohol to get drunk. After the Red Cross established where we were we were allowed to write and receive a few letters.”

He points to a photo beside the TV of an attractive young woman, aged about 19 or 20.

“That’s Kathleen. A great girl. A great woman. She sent me that. It’s stamped with Stalag on the back. I had it up on the wall.”

Kathleen Nixon, a Protestant, was born in Derry also.

“In January 1940 I got leave and we got married in the Long Tower. But I had to go back almost immediately and we never consummated our marriage! It was another six years before I saw her.”

During those six years Kathleen, whose 19-year-old brother was killed-in-action in France, moved to Birmingham and worked in a munitions factory.

George and his comrades were put to working on railways and tarring the Danzig Road, from 7 in the morning until 8 at night, seven days a week.

“I escaped a few times, but just for a couple of days. It broke the monotony,” he smiles, impishly. But wasn’t he afraid of being shot?

“Christy had been shot dead trying to escape but that didn’t deter me. We thought we might be able to contact the Polish Underground who were very active. When we were caught we were thrown in ‘the hooter’ and given a diet of bread and water before being sent back to work.”

Towards the end of the war conditions improved. George, a featherweight boxer, who fought for the Regiment, boxed in one of his last POW camps.

“It was in front of thousands of prisoners I boxed a fella called Paddy McManus from Glasgow. He had been a runner-up in the ABA championships. A good fella. But I beat him!”

I ask him what he thinks of the South which remained neutral during the war.

“The South wasn’t really neutral. There were thousands in the army from the Republic. The greatest soldiers you ever met. A lot of them, my friends, were killed. As a matter of fact, I knew Gay Byrne’s uncle who was killed in Burma. Sergeant ‘Fruiterer’ Byrne. ‘Fruiterer’ because he loved jam! I think Gay Byrne had three uncles killed in the war in the Inniskillings.”

As the Russians advanced in the East the POWs were moved to Germany.

“One day we were marching down the road when we just met the American Army in a woods near Magdeburg. The German soldiers with us were just glad that the war was over. We were taken to the American camp and from there to Belgium. Given £5, new clothes and within 24 hours were back in England.

“I had a great re-union with Kathleen. It was very emotional. It’s hard to explain. Not having consummated our marriage the first time we finished up with a family of eight.”

After his demobilisation they returned to Derry and lived with Kathleen’s mother for five years until they got a house of their own in the Creggan. Kathleen converted to Catholicism, even though George is not very religious but believes in ‘basic Christianity’. For a time he worked for the Royal Navy at the Fort George base in the city. When things were tight he went to England, worked hard and sent money home. Tragedy struck the family with three out of the four girls dying in infancy; one son Gerard dying of a brain haemorrhage; another, Patrick contracting polio which has left him paralysed.

“It was one of those things in life. But Kathleen never got over the deaths of the kids. She missed them.”

On his return to Derry he joined the Territorial Army as a reservist and, although he became a postman, remained in the Territorials as a Sergeant-Major, training cadets throughout the Troubles whilst, incredibly, living in the IRA-stronghold, Creggan.

“My door was marked because of my army connections. A big ‘X’ and ‘Informer’. It upset me. One boy said to me, ‘Are you with the Cadets?’ Says I, ‘I am.’ Says he, ‘Well, you’ll be shot.’ I said to him, ‘Well, you’ll not shoot me because you couldn’t hit that wall.’ End of conversation.

“I didn’t preach hatred in this house. What the IRA done was their business. I wasn’t going to make a difference. People didn’t want me to leave so I stuck it out.”

It was only after Kathleen died from a heart attack in 1988 that he moved in with Patrick in the unionist Waterside of Derry. I ask him about his attitude to the Troubles, what did he think of the Civil Rights Movement which was born in bloodshed in Duke Street, 1968, five minutes from where we are talking.

“I didn’t have anything to do with them, one way or the other. I am a great believer in people looking after themselves. There is such a thing as discrimination but discrimination comes in all forms. A father getting his son a start in his factory is discrimination. To my knowledge I was never discriminated against. I wouldn’t let it happen.”

But discrimination in this city was one of the major causes of the conflict?

“Well, so they say. I didn’t think so. The IRA wants one thing. A United Ireland. That’s their bottom line. If I was in the IRA that’s what I would want…As for peace, there is no peace. People getting shot everyday and kneecapped. At the end of the day there’ll be civil war in Northern Ireland. Nobody’s gonna give.”

Is he on any side?

“I’m sort of… I want to stay British. I am a unionist but don’t vote for any unionist party.”

How did he feel when the British army shot dead thirteen people on Bloody Sunday?

“It should never have happened. Bad discipline. I don’t think it was planned. Could have been panic. A British soldier takes an order. I wasn’t there. I was never interested in politics. On the other hand, if that march hadn’t started there would have been no Bloody Sunday.”

If he had been 30 years younger he might have been a soldier that day. How would he have reacted?

“I wouldn’t have liked it.”

Would you have resigned?

“That’s a hard question to answer. I’m an army man. A soldier is only a human being. Everything’s done on the spur of the moment. That’s how Victoria Crosses are won. Won by people thinking quickly…

“I’ve had a very good life. Adventure. Bombed at. Shot at. Kicked at. I survived it all.”