Children of the Revolutionaries

Read again that powerful memoir Every Secret Thing by Gillian Slovo (pictured), which is a deeply personal examination of the damage done to familial relationships by parents who are full time revolutionaries/activists and whose love of, and sacrifices for the cause of freedom are also borne and suffered by their innocent children. It is a story that will certainly resonate with those Irish republicans whose commitments led to them being away from home either on-the-run or serving lengthy prison sentences. In fact, after a talk which Gillian gave some years ago at Féile an Phobail, the daughter of parents who had both been in jail turned to Bill Rolston and said with great conviction: “How does Gillian know my life story?”

From that moment Bill was determined to write a book on the subject which became, Children of the Revolution.

In the majority of cases it was one parent who carried the family but in the case of Gillian Slovo both her parents were major figures in the anti-apartheid movement, away travelling and organising. Gillian’s mother, Ruth First, paid with her life. She was killed by a parcel bomb in 1982 in Maputo, Mozambique. Gillian’s father was Joe Slovo, a communist and the commander of the ANC’s military wing Umkhonto we Sizwe.

Having myself written memoirs, which invaded the privacy of loved ones, I could empathise with Gillian’s many dilemmas about the ethics of scrutinising and publicising the lives of others because their lives were so intimately a part of our own.

12th August. On behalf of the Bobby Sands Trust I was presented with a £350 cheque from photographer Stuart Borthwick, author of The Writing on the Wall, a book based on the mural photographs Stuart has taken over many years. The cheque is a contribution towards the upkeep of the Falls Road mural of Bobby Sands.

11th August. Chaired Scribes at the Rock and interviewed Paul Laverty about his writing and his long-collaboration with the director Ken Loach. 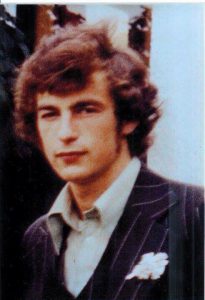 7th August. Gave the oration in Bellaghy at the commemoration for Thomas McElwee (pictured) following a march through the town. This is what I said:

“In my experience the damage inflicted on us by the sectarian six-county state and the British occupation was compounded by partition and the Free Statism of the southern establishment. When RTE covered Bobby Sands going on hunger strike, or Tom McElwee going on hunger strike, what they covered was their Diplock court convictions.

“They never covered the men’s political or moral convictions because that would have gone against the desire to criminalise our struggle which was much easier to do than confront the power of Britain and British intransigence.

“1981 was the longest year in my life – but what must it have been like for the families of comrades dying a slow death?

“I do believe 1981 was ‘our 1916’. After 1981 all was changed utterly. After the Easter Rising, within a few weeks the British had executed the leaders, but here in the North the hunger strike deaths took place over a seven month period.

“In the middle of the hunger strike we thought a breakthrough was possible. We had been told that the British government was interested in settling it. I was allowed into the prison on Sunday 5th July to meet with the hunger strikers. I can still see those men around that table in the canteen of the hospital wing. On my left Kieran Doherty, then Kevin Lynch, then Thomas, Thomas McElwee, who by that stage had served 1,300 days in a H-Block cell on protest. Martin Hurson was too ill to attend. At the bottom of the table was Paddy Quinn. On the right was Laurence McKeown, then Micky Devine, then sitting beside me in a wheelchair was my old friend and comrade Joe McDonnell who would be dead within three days. They all spoke, including Tom, and he was adamant that their demands must be met.

“Just before the first hunger strike in 1980 ended the British government was full of promises – that they would introduce an enlightened, progressive and liberal prison regime. But as soon as the hunger strike ended, and the pressure was off, the British reneged on their commitments, refused to budge and their bad faith triggered the second hunger strike.

“This experience of bad faith was what was foremost in the minds of the men around that table. They said they wanted to see what the British government was offering and they wanted it confirmed in a way that the British could not subsequently repudiate. The Irish Commission for Justice and Peace similarly asked the British to send in an official to explain what, if anything, was on offer.

“I left the hunger strikers to go to the doctor’s office where I was in telephone contact with Gerry Adams on the outside. He was liaising with Martin McGuinness who was liaising with Brendan Duddy the British contact. It was no way to do business and was open to misrepresentation and distortion. But as I was waiting to see what the British would say, a deputy governor, John Pepper, burst into the office and ordered me out and I never saw the hunger strikers again. The ICJP six times called upon the British to send in a representative to meet the prisoners but they never replied.

“After Joe’s death Michael Alison, the prisons minister, was asked to give the British position. He compared talking to hunger strikers as like talking to hijackers: ‘you continued talking while you figured out a way to defeat them,’ he said.

“And that was the policy that was to lead to the deaths of Martin Hurson, Kevin Lynch, Kieran Doherty, Tom McElwee and Micky Devine.

“I stood here 35 years ago and was honoured to give the oration at Tom’s funeral just as I am honoured to be here today in the presence of his noble family.

“Back then the British army and the RUC occupied and took up positions on surrounding roads. They were protected by not one but by six helicopters. Benny, who was also in prison on the blanket, arrived just in time from the H-Blocks on a 10-hour parole. Tom’s coffin was carried from the house by his sisters. At the end of the lane IRA Volunteers stepped forward and fired a volley of shots over his coffin.

“A piper played the H-Block song and many people quietly sang:

“‘I am a proud young Irishman,
“In Ulster’s hills my life began,
A happy boy through green fields ran
And I kept God’s and man’s laws.’”

“Among the mourners was Dinny Gleeson, a veteran of the War of Independence who had been in a Flying Column and had fought the British army and the Black and Tans – a real connection with 1916 and our long struggle for freedom.

“Chairing the graveside ceremony was veteran republican John Davey, who had been interned in the 1950s, 1960s and again in the 1970s. Indeed, it was in Long Kesh Internment Camp that he and I became friends. John himself was later to die in violent circumstances when he was assassinated coming from Council business to his home in Gulladuff.

“I wish to repeat what I said that day 35 years ago. Thomas McElwee was invincible from beginning to end, in life as well as in death.

“His dying words remain powerful and indeed were extremely prescient and are even more relevant today. Thomas said: ‘I bear no animosity, no ill-feeling towards anybody. I would like to live among the people… and promote peace and harmony among Catholics and Protestants and also with the British.’

“I have always found it remarkable that the oppressed are always more forgiving than their oppressors. It is very tempting to feel bitterness.

“The British were full of great spite and great cynicism. Their position was: ‘We know we cannot defeat you. But we will make sure you die.’

“I say they were cynical because not long after the hunger strike they conceded the five demands. When I was imprisoned in the H-Blocks some years later, I and my comrades had political status, prison conditions won for us by Thomas and his comrades.

“But the hunger strike was bigger than that. It inspired a new generation who put manners on the British, brought thousands more into republicanism, empowered the people, and created a political momentum which is unstoppable, a political movement in Sinn Féin which will un-partition Ireland.

“So we draw courage and great inspiration from Thomas McElwee and his example. He towers over the people who hunted him, arrested him, charged him, judged him, convicted him, stripped him, beat him, and the system that killed him.

“He towered over every one of them, and he was only twenty three.

“What a man. What a soldier. What a hero. What a son. What a brother.

2nd August. Did studio interview on Talkback, chaired by Mark Carruthers, about the film 66 Days, and a claim by the DUP’s Gregory Campbell that he was censored from attending a screening of the film in Andersonstown as part of Féile an Phobail.