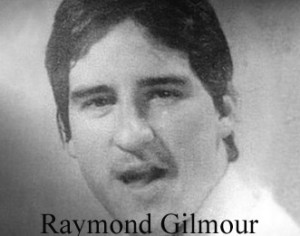 Discredited informer Raymond Gilmour, one-time citizen of Derry, has been resurrected in the media and by those opposed to Sinn Féin in order to attack Martin McGuinness. However, few of those journalists – particularly, Tony Allen in the Belfast Telegraph – mention the fact that Gilmour was so bad a witness in a supergrass trial that even the Lord Chief Justice couldn’t swallow his story and said he was a “man to whose lips a lie invariably comes more naturally than the truth.”.

Here is a feature I wrote for the Irish Examiner in 1998 when Gilmour’s book Dead Ground was published:

Do you know what the trees say when the axe comes into the forest?

Look! The handle is one of us!

From time immemorial the collaborator, the informer, has been reviled. Ireland’s long history as a subjugated nation of its near neighbour, England, can be explained in part to the actions of informers who have subverted attempted national revivals and uprisings. Understandably, Ireland reserves its greatest repugnance not for the enemy but for one of its own.

Throughout the present Troubles it is estimated that the IRA has killed sixty people whom it accused of secretly working for the British army or the RUC, and banished from Ireland up to a hundred others who were discovered before they could cause major damage or who availed of IRA amnesties. Who were these informers? The young lad across the street who was caught on a burglary and was promised he would not be charged if he spied on certain neighbours. The spouse discovered having an affair with another man’s wife and who was blackmailed into also reporting on the movements of republican suspects. In one case in Derry, where an IRA arm’s dump was discovered in the house of two sympathisers, the RUC arrested both husband and wife and threatened to charge the woman. They dropped the threat in return for the husband, Paddy Flood, joining the IRA and sabotaging operations. He did so. The IRA eventually flushed him out and killed him, dumping his body on a border road.

Besides those entrapped, and those IRA members who were recruited after breaking in police custody, others inform for money and begin to enjoy the danger as well as the rewards. According to the late head of the RUC Special Branch, Ian Phoenix (who died in a Chinook helicopter crash in 1994), he met no one who informed out of conviction.

The biblical Judas was so ashamed of betraying Christ that he hanged himself. Liam O’Flaherty’s Gypo Nolan does not find peace until, dying from gunshot wounds, he receives the forgiveness of Mrs McPhillip whose son Frank was killed because of Gypo’s information to the police. But atonement is now a thing of the past, shame an emotion alien to the Gypo Nolans of today, if the new phenomena of the informer as media celebrity is anything to go by.

Last year, two former IRA men, Eamonn Collins (Killing Rage) and Martin McGartland (Fifty Dead Men Walking) published books about life inside the IRA. A third, Sean O’Callaghan (who has described killing Cork man John Corcoran in graphic detail in interviews) is in the process of writing his memoirs. Collins was involved in five killings. In one, he set up for assassination a customs officer work colleague who was also a soldier in the UDR. After his death Collins contributed money to the floral tribute and attended his funeral to see if he could spot any other potential targets. When he was eventually arrested he agreed to betray his IRA comrades on condition that he was not charged with anything. When that failed he agreed to turn supergrass in return for a reduced sentence. Collins, to paraphrase Terence Mac Swiney, could inflict suffering, but when the chips were down he couldn’t endure it himself.

Although it is sixteen years since he was exposed as an informer Raymond Gilmour must have only recently smelt royalties and decided to join the bandwagon. And what a tale of self-justification and self-pity his book is. Here is a man who led a double-life, who lied to his parents, his wife, his friends and comrades but who tells us at the beginning of Dead Ground that “everything” we are about to read “is true.” Even the Lord Chief Justice in Belfast at the trial of 35 former friends and neighbours whom Gilmour gave evidence against described him as being “entirely unworthy of belief”. He was “a selfish and self-regarding man to whose lips a lie invariably comes more naturally than the truth.”

Gilmour was being questioned about a burglary when asked by the RUC to join the INLA. He was 16 at the time. “The thought of all violence and killing simply turned my stomach,” he says, and then contradicts himself by telling us how, later, he and a friend used a replica pistol to rob an elderly postmistress. Nevertheless, “to save lives”, he did the RUC’s bidding and joined the INLA.

Gilmour describes himself as coming from ‘Londonderry’, which says something of how far he has psychologically distanced himself from home. According to him, all the people in Creggan were into thieving, the men all beat up their wives who in turn beat up their kids. “The Creggan was windswept and dirty, the people shabbily-dressed…” About his family he says that his mother had a history of mental illness, that his father was a boozer. Two of his brothers, “beat up my sisters and me and tried to make us drink their piss.” One also “forced me to keep my school dinner and bring it home after school so that he could eat it.”

About one INLA comrade who was killed by the SAS he writes, “if ever a person deserved to die, it was Neil McMonigle.” 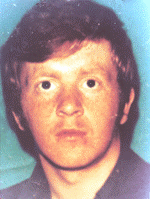 Gilmore’s best friend was INLA man Colm McNutt (pic, right). Gilmour tipped off his RUC handler about an INLA robbery during which McNutt was shot dead. Feeling ever remorseful he was comforted when his handler assured him that it was really another informer’s information that led to McNutt being killed.

Gilmour details his life inside the IRA and boasts of all the people he got arrested (he was paid two hundred pounds a week, plus bonuses) but Derry republicans I spoke to claim that he was a Walter Mitty-type and has exaggerated his role. The part of the book that is true is that each time an informer gives information he increases the risk of detection. Undoubtedly, Gilmour also ran the risk of capture, death or serious injury whilst on IRA operations, and he does communicate the fear and paranoia he was living under.

After the capture of an arms dump in August 1982 he became the IRA’s chief suspect but fled to the RUC, taking with him his bewildered wife and children. She eventually left him and came back to Derry, later divorcing him. Whilst Gilmour’s victims were on remand the IRA kidnapped and held his father, threatening to kill him unless Gilmour retracted his evidence. Raymond didn’t bat an eyelid for the old boy whom the IRA released unharmed before the supergrass trial, described with relish by Gilmour as “one of the biggest and most expensive cases in British and Irish legal history.” It collapsed in December 1984. He has a bizarre theory about this: “It wouldn’t surprise me to discover that the ending of the trial in which I was involved was part of another attempt by the British government to win concessions for the IRA.” That’s our Raymond, okay, up there with the major players!

But now the axe-handle is angry at having been tossed aside and bemoans the fact that although he was initially given protection, his minders didn’t consider him such a nice person. “I expected a bit of respect for what I’d done, but they seemed to look down on me.” Another minder, “who was nice as pie to my face, was saying what a bastard I was and calling me all the names under the sun.”

He can’t sleep at night, listening to creaking floor boards, waiting for the IRA to come and get him. “I’m not afraid to die, but if the IRA are coming to get me, I’m going to take a few of them with me,” says this lost, unloved and abandoned man from his adopted home somewhere in Hopelessville.