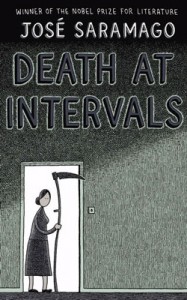 Have just finished José Saramago’s 2005 novel ‘Death At Intervals’. Initially, difficult to get into but after a struggle enjoyed the proposition/trope of the fable/satire that one day, in this small country where the novel is based, people stop dying and it has catastrophic consequences. A smaller number of healthy working people have to take on the burden of an increasing number of sick and elderly folk who just cannot die!

A character called ‘death’ (gender, feminine) also enters the scene and begins writing letters to the papers, and another to the prime minister announcing that death will soon resume but everybody will get a warning letter, allowing them seven days to put their affairs in order. This character, ‘death’, eventually becomes flesh and experiences human and humane desires.

The story wilts from time to time but as a novel of ideas it throws up certain questions about mortality, religion, human nature, and, of course, Saramago can be immensely funny and ridiculous, teasing his reader with the issue and nature of the suspension of disbelief.

I read Nobel Literature Laureate Saramago’s ‘All The Names’ about two years ago – very Kafkaesque and enjoyable. Lent it to my friend Niamh who found it unreadable! Still have his novel ‘Blindness’ to read.