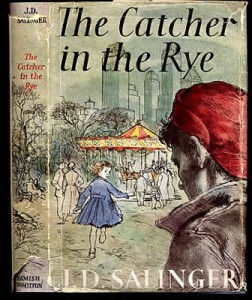 I loved ‘Catcher In The Rye’, found it very moving and the product of a benevolent, affable human being completely at odds with the real Salinger, a recluse who lived behind a six-foot fence in a compound, ordered all his fan mail to be burned and sued anyone who tried to publish his biography.

Holden Caulfield, the alienated youth, who rightly distrusts adults – ‘phonies’ who are hypocrites and liars, and is sickened by their behaviour –  adores his little sister Phoebe. His brother, Albie, died young, and his older brother, DB, works in Hollywood as a script writer. Written in the first person, Holden, who has run away from boarding school, witnesses a scene which lifts the depression he feels even though the scene confirms the carelessness of adults towards children and why they cannot be trusted.

“This family that you could tell just come out of some church were walking right in front of me – a father, a mother, and a little kid about six years old. They looked sort of poor. The father had on one of those pearl-grey hats that poor guys wear a lot when they want to look sharp. He and his wife were just walking along, talking, not paying attention to their kid. The kid was swell. He was walking in the street, instead of on the sidewalk, but right next to the kerb. He was making out like he was walking a very straight line, the way kids do, and the whole time he kept singing and humming. I got up closer so I could hear what he was singing. He was singing that song, ‘If a body catch a body coming through the rye’. He had a pretty little voice, too. He was just singing for the hell of it, you could tell. The cars zoomed by, brakes screeched all over the place, his parents paid no attention to him, and he kept on walking next to the kerb singing ‘If a body catch a body coming through the rye’. It made me feel better. It made me feel not so depressed any more.”

Later, Holden steals into his home to see Phoebe. In the bedroom he talks to her:

“She was right, though. It is ‘If a body meet a body coming through the rye’. I didn’t know it then, though.

“‘I thought it was “If a body catch a body”,’ I said. ‘Anyway, I keep picturing all these little kids playing some game in this big field of rye and all. Thousands of little kids, and nobody’s around – nobody big, I mean – except me. And I’m standing on the edge of some crazy cliff. What I have to do, I have to catch everybody if they start to go over the cliff – I mean if they’re running and they don’t look where they’re going I have to come out from somewhere and catch them. That’s all I’d do allday. I’d just be the catcher in the rye and all. I know it’s crazy, but that’s the only thing I’d really like to be. I know it’s crazy,’

Phoebe gives him her Christmas savings even though he’s only looking to borrow two dollars. He starts to cry and Phoebe, though scared, puts her arms around him.

‘Catcher In The Rye’ sells more than a quarter of a million copies in paperback every year and is a modern classic. If you have not read it, you are in for a treat!