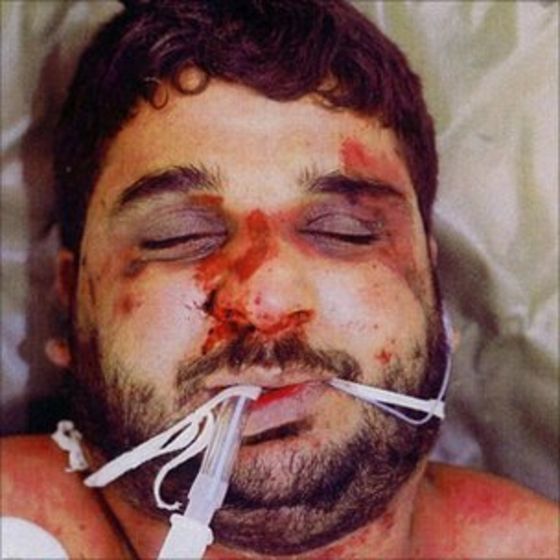 The murdered Baha Mousa, an innocent Basra civilian. Hooded, manacled, denied food and water. Ninety-three injuries. Beaten by British soldiers in 2003. Was subject to several practices banned under British law and the Geneva Convention. Legal case against government continually thwarted by authorities. One soldier eventually sentenced to one year in military custody

Did interview on The Nolan Show this morning about the comments of former British army Colonel Tim Collins who criticised ongoing inquiries into British army behaviour in Iraq and in the North. He denounced investigations into British Paras in Derry in 1972 and referred to “The Bloody Sunday farce… a political stunt and cannot be taken seriously.”

So I was having a serious, meaningful discussion with Doug Beattie (now an Ulster Unionist and also a former soldier) when Stephen Nolan indulged particular callers whose only interest was to deflect the conversation away from the subject and bog it down in what the IRA did/didn’t do and ad hominem comments about myself.

Thus, we didn’t get properly discussing David Cameron’s denigration of legal firms representing former tortured and murdered Kenyan and Iraqi prisoners, or Collins’ call for such law firms to be punished, struck off and their firms closed. Cameron’s call is aimed at intimidating lawyers from taking on cases that are domestically controversial or nationally shameful (and in Ireland such denigration led to the murders of Pat Finucane and Rosemary Nelson). To call such law firms as ‘ambulance chasers’ is a total misrepresentation. For example, the London firm Tandem Law which took the case against the British government over the torture, castration and rapes of Kenyan detainees, took it on a ‘no win/no fee’ basis, thus carrying the greatest financial risk had Britain not eventually conceded.

20th January. Attended meeting in Derry of Towards Understanding and Healing where former soldier and member of the Veterans for Peace, Glenn Bradley, gave riveting testimony about his journey from conflict to peace-building.

14th January. I interviewed Jamie Bryson in the Linenhall Library regarding his decision to manage the campaign for former DUP Councillor Ruth Patterson in May’s Assembly election. To be published in the Andersonstown News on 28th January.

Interviewed on Periscope by Jude Collins about 1916 and the 2016 centenary commemorations and the general election in the South in February and the assembly elections in the North on 5th May.

13th January. Interviewed on Talkback with Malachi O’Doherty regarding 1916 and Partition.