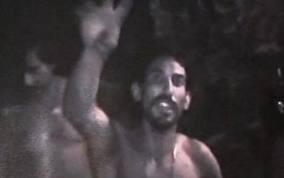 Wrote a feature for yesterday’s Andersonstown News on the Chilean miners who are still trapped below ground. I called the piece, ‘Esperanza, Spanish for “Hope”’. Here it is:

The weather on Thursday, August 5th, wasn’t bad. You might have been getting ready for work or were on holiday or, as it was festival time, looking forward to Brian Kennedy in the West Club or Lennie Henry in Andersonstown Leisure Centre.

I remember one August as a kid in Corby Way having done something bold and as punishment being put to bed at five o’clock by the boss, my mother. I could hear the other raucous kids laughing, screaming and playing outside and every minute of my confinement represented an hour of total agony! I was still pining and feeling sorry for myself even when darkness fell, the children were called in, had their supper and had gone to bed.

From that tiny experience I have, to this day, a sense of how agonisingly slow the passage of time can be, despite on other occasions spending seven-day periods in Castlereagh or years in prison.

On Thursday, August 5th, three hundred miners went to work as usual in the gold and copper mine of Copiapó, Chile. Some time into the shift there was an explosion and the roof caved in. Whilst the majority escaped, thirty three men were trapped about three miles from the entrance, at a depth of 2,300 feet and were widely considered to be lost.

This awfulness of being buried alive reminded me of the explosion on board the Russian submarine Kursk, some years ago, with the stricken vessel lying helpless on the ocean floor. The world was initially told that all 118 crew had died immediately only for it to have been discovered from notes found on the body of the Captain that he and 23 others had survived in the dark for several days before being asphyxiated.

The worst was feared for the Copiapó miners but then after seventeen days a tapping was heard on a drill. The men had found shelter in a tiny cavern, had survived on a jar of peaches and small amounts of tuna and mackerel and were able to drink water from machinery tanks.

They had lost about 22 pounds each and were surviving in a temperature of almost 100 degrees and 95 percent humidity.

When news of the remarkable story of survival was announced jubilant crowds filled the streets of the capital, Santiago, and hopeful families set up base at the rescue camp.

However, the magnitude of the rescue operation meant that it would be months before a large enough bore hole could be drilled.

Everyday the people of Chile and South America follow with pride, fascination and sympathy the lives of the trapped men: thirty two Chileans and one Bolivian, whose ages range from 19 to 63, and their families. Experts have been brought in to advise on their psychological and physical health and they have received messages of support from former Brazilian footballer, Pelé; and four of the 16 Uruguayans who in 1972 survived 72 days at 30 degrees-below-zero in the snow-covered Andes after their plane crashed, and stayed alive through cannibalism by eating the flesh of friends killed.

The buried miners have set a record for the most time anyone has survived trapped in a collapsed mine. They have done so by organising themselves into a micro-society with the shift foreman, Luis Urzua, in overall charge. They also have adopted roles as ‘a priest’, ‘a TV presenter’ and ‘a poet’. The ‘doctor’, Yonny Barrios, did a short nursing course twenty years ago. Supplied from the surface with medicines through a small bore hole he vaccinated all the men for flu and pneumonia, takes blood samples and monitors their health. As the rescue hole reaches them they will need to be in shape to shift 4,000 tons of fallen rock.

The resourcefulness of human beings is incredible. The bore hole, their current lifeline, is only four inches in diameter, yet down it has been sent collapsible cots so that the men can sleep on a dry surface, chemicals for sanitation, clothes and food, a video camera and Bibles and rosary beads.

Victor Zamora, who never wrote a verse in his life, wrote a small poem about their first 17 days cut off from the world:

Our spirits are high

We have to organise ourselves.

We have to plan together and pray

Ask God that the bore hole arrives in time.

Three weeks go by and this noise doesn’t stop

One bore hole goes by us,

Another only half way down.

Listen to me God, we can’t take anymore.

Chile we are in your hands.

Last week there was joy for one of the miners, Ariel Ticona, whose wife Elizabeth gave birth to a girl whom she christened Esperanza, Spanish for ‘Hope’.

The company who own the mine, which it opened without fulfilling minimum safety requirements, has filed for bankruptcy, leaving its workers penurious. However, an appeal for new jobs for the trapped men and their co-workers resulted in no fewer than almost 1,200 offers, many with safer and more advanced mines and all of them are surface roles such as drivers or electricians.

Of course, their ordeal is not over yet.

But anytime you are feeling down or have a sore head or are feeling bored with what’s on offer out there (or you have been chastised for being bold and have been put to bed by the boss) think of these poor men trapped underground, who, despite their predicament and what is still in front of them, smile and hope and pray and are determined to reach the surface, are determined to live and be reunited with their loved ones.