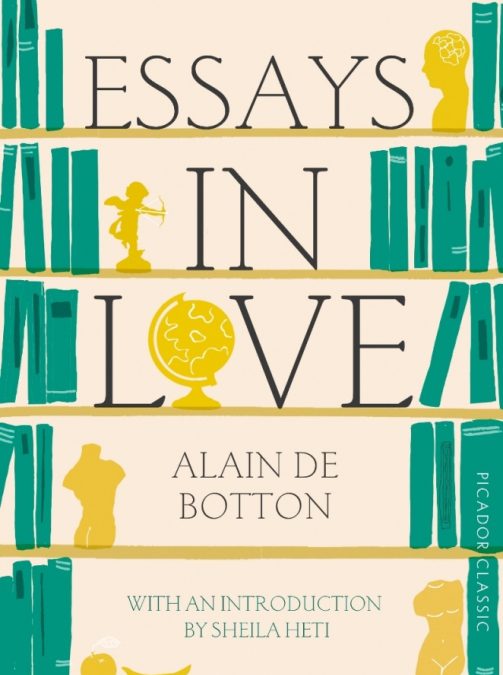 Alain de Botton can be a very witty and thought-provoking writer, especially the way he weaves philosophical thought into his books. Essays in Love (1993) was his first novel, written when he was just twenty-three, and it is hilarious from a mildly sadistic point of view as the self-obsessed, self-centred narrator gets his comeuppance.

No wonder his girlfriend Chloe, a graphic designer in Soho, ditches him for another man. Everything – and I mean, everything – they do, say and think, he forensically analyses as if emotion and love can be weighed on a scale or could be subject to science and statistics.

There are chapters on What Do You See In Her and The Fear Of Happiness (cathexis), but the most voyeuristic is the chapter on Chloe’s orgasms, Contractions.

“It was at first hard for me to imagine an untruth lasting 3.2 seconds fitted into a sequence of eight 0.8-second contractions, the first and last two (3.2s) of which were genuine… Her usual number of contractions was replaced by an exaggerated activity, possibly designed to divert me from her lack of true involvement in the process. If I placed such interest in the appearance or non-appearance of contractions, it was not because contractions were per se important [there was evidence to show pleasure was not related to number], simply that they were a significant symbol in a woman [who had in the past enjoyed a rapid number of contractions] of a possible wider trend towards disassociation.”

He initially sets out to be the giver of love, rather than the taker, presumably because that way he is in control of the economy. But on one occasion when Chloe does not contact him he proves only too human: “The telephone becomes an instrument of torture in the demonic hands of the beloved who doesn’t call.”

She buys a pair of shoes, currently in fashion, and loves them. But for him her judgement presents him with a crisis!

“I was shocked to see Chloe [with whom I had agreed on almost everything till then] fall into raptures over what I took to be at best a most unattractive pair of shoes. My idea of who she was, my Aristophanic certainty of who she was, had not included this particular enthusiasm. Disturbed by the thought of what Chloe had had in mind when she bought them, I asked myself, ‘How could she like both this kind of shoe and me?’”

The novel traces the trajectory of their affair – a love born at first sight but which “does not die with corresponding rapidity.”

(It reminded me of a short story by Julian Barnes which appears in A History of the World. It is about a man who goes to the South American rain forests to make a film. His girlfriend is in England and what we read is the sequence of letters he writes her. They start off confident, full of love, very romantic, but as time passes, and he fails to get a response, the dark side of love begins to feature. All the things that the diplomacy of love had left dormant begin to be nastily aired and I think in his last letter hatred is in full flood!)

Our narrator first met Chloe on the shuttle from Paris to London and, coming full circle, it is when they are returning again from Paris on a weekend that turned out not to be romantic that she tells him what’s going on.

“‘What? What does seeing mean? Seeing Will?’

“‘Would madam like a beverage or light snack?’ enquired the stewardess, arriving with her trolley at that moment.”

He has lost Chloe but when he sits down and thinks things out he realises that “a more complex lesson needed to be drawn, one that could play with the incompatibilities of love, juggling the need for wisdom with its likely impotence, juggling the idiocy of infatuation with its inevitability. Love had to be appreciated without flight into dogmatic optimism or pessimism, without constructing a philosophy of one’s fears, or a morality of one’s disappointments.”

As the novel draws to a close we now find him falling in love with Rachel – because love was “as inevitable as it was unreasonable – and its unreason was unfortunately no argument against it.”

Let’s hope for Rachel’s sake he leaves the stopwatch in the lockerroom.