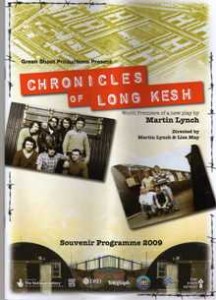 There will be on a panel discussion this Saturday [4.40pm, 24 January] in the Waterfront Hall after a matinee performance of ‘The Chronicles of Long Kesh’. Taking part will be Billy Hutchinson [former UVF prisoner], Brian Erskine [former prison officer], William McQuiston, Rona Fields from Washington DC [an internationally renowned psychologist specialising in political violence] and myself. It will be moderated by BBC’s Noel Thompson [Newsline & Hearts and Minds] and will be on the stage at the Waterfront Studio Theatre.

This is the second symposium as a spin-off around Martin Lynch’s new play. It was reviewed on BBC Radio Ulster’s Arts Extra programme on Monday night and I was, again, one of the panellists. It can be heard for up to five days on the BBC iPlayer by clicking on the link below. The review begins 11 minutes into the programme.