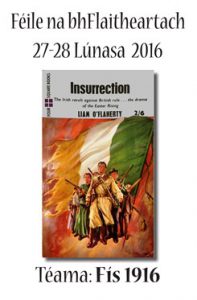 Just received the clar for this year’s Féile na bhFlaitheartach 2016. Here are the details.

The Aran Island of Inis Mór will host for the fourth time the bi-lingual Féile na bhFlaitheartach/ The Liam & Tom O’Flaherty Weekend Festival between the 27th & 28th August. The theme is ‘Fís 1916/The Vision 1916’. The keynote speech will be given by the historian and former editor of the Irish Press Tim Pat Coogan. His talk will focus on the ideals of 1916 and is titled: “All changed, changed utterly”.

Appropriately the school will be opened by Fearghas Mac Lochlainn, grandnephew of Pádraig and Willie Pearse.

The O’Flaherty brothers were born and raised on Inis Mór. Liam the radical novelist and short story writer is without doubt the most famous, but Tom too made his literary mark in the short story genre although probably more so as a left-wing activist and polemicist in the USA.

Insurrection
In this the centenary year of the Easter Rising the festival will naturally focus on the events of 1916. However, it will be a commemoration with a difference as it will examine the period and its aftermath through the radical lenses of Liam and Tom O’Flaherty. This will be achieved in a series of ways. For the first time ever there will be a dramatic re-telling in Irish of Liam O’Flaherty’s last novel Insurrection, which presents his take on the 1916 Rising. This will be performed by by Máirín Mhic Lochlainn and Aisteoirí Chois Fharraige. 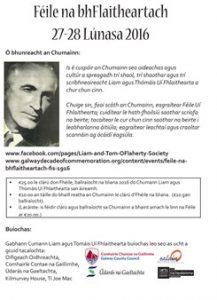 First World War
Another first at this year’s school will be the public reading in English by Fionnghuala Ní Choncheanainn of a virtually unknown story of Liam’s, The Discarded Soldier, which was written at the request of his brother Tom to be published in the Communist Party of the USA’s daily paper, the Daily Worker, in 1924. This short work can be traced directly to Liam’s experiences as a soldier fighting in the First World War and is more than appropriate to re-produce in this centenary year of the bloody and senseless Battle of the Somme. As the story’s title indicates the author realised that soldiers are seen as totally expendable, of little or no importance during and after war. This is a powerful piece of anti-war literature.

Tom O’Flaherty’s short story, Na Líonta. Ar Círín na Breachlainne Móire (The Nets. On the Crest of Breachlainne Móire), will be read by Máirín Mhic Lochlainn in the Garden of Remembrance next to the O’Flaherty family homestead, on the Saturday afternoon.

The Aran Islands Connection and 1916
As with every year at Féile na bhFlaitheartach links are made with the people of the three Aran Islands. This year is no exception. Indeed, for the first time the Aran Drama Youth Group from Inis Mór will take centre stage with its award-winning sketch “Comóradh Fir Chróga 1916” (Celebrating the Brave Men of 1916) on the Saturday evening.

A particularly favourite section of the Féile takes place at 12.30pm on the Sunday in Tí Joe Mac, Kilronan. This year’s theme is appropriately entitled: What was Aran like in 1916? The broadcaster, film-maker and former County Councillor Seosamh Ó Cuaig will pose the question: Where were Liam and Tom O’Flaherty in 1916? The situation in Aran in 1916. This will be followed by Máirin Ní Chonghaile remembering Seán Ó Briain of Inis Meáin, who fought bravely in 1916. Then the memories of Brian Seoige from Inis Oírr, who also took part in the 1916 Rising will be re-told. And finally Fionnghuala Ní Choncheanainn will read Liam O’Flaherty’s The Discarded Soldier. As always each of these themes will prompt a lively discussion in both Irish and English. 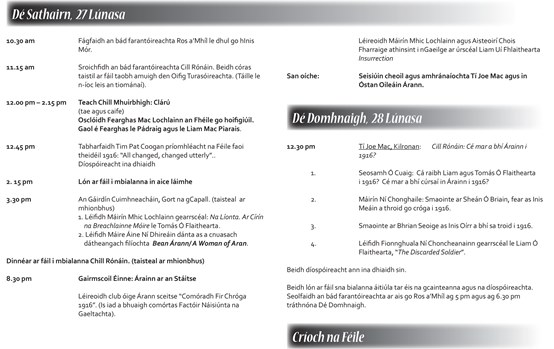