Fighting Between Revolutionaries Is Tragic 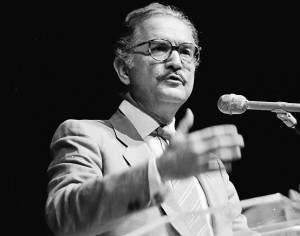 I find that Carlos Fuentes wears his considerable erudition too conspicuously on his sleeve which has a slight intimidating effect on the reader and can make for a bit of struggle. As well as being a famous novelist he writes on politics and culture and was Mexico’s ambassador to France from 1975 to 1977.

Yet there are some nuggets in his 2002 book, ‘This I Believe – An A–Z Of A Writer’s Life’. “I hope the reader of this book,” says Fuentes, “will discover the various kinds of love that are contained in each chapter of my personal alphabet. There is one kind, however, that I would like to highlight so as always to keep it present in my mind. I refer to the quality of attention. Love as attention. Paying attention to the other person. Opening oneself to attention. Because extreme attention is the creative faculty, and its condition is love.”

A pertinent quote – given the propensity of revolutionary organisations to split and feud – is this: “In the midst of the French Revolution, Saint-Just had this to say about the battle for revolutionary freedom: fighting for freedom against tyranny is an epic struggle; fighting between revolutionaries is tragic.”

Later, under L for Left he writes: “The nostalgic Left that looks back on what no longer exists cannot be the constructive movement it needs to be. But the Left in power must always admit the existence of the other Left, the one that is not in power, the one that resists power, until (an even when) the Left occupies the seat of power. This is the Left’s great challenge in the twenty-first century: to learn to oppose itself so that it will never again fall into the dogma, chicanery and tyranny that sullied it so badly during the twentieth century.”

He quotes Winston Churchill’s famous warning that democracy is “the worst form of Government except all those others that have been tried from time to time.”

On cruelty, he says: “As far as Buñuel was concerned, the human capacity to injure one’s brother transcended all social barriers.”

An okay book but not great.