George Galloway For the West! 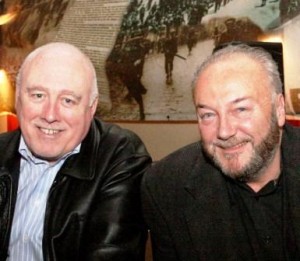 I know it is probably a non-runner but election fever does cause you to go off your head. And, anyway, everybody loves speculation!

As pledged, Gerry Adams resigned as MP for West Belfast once the 11th March election in the South was announced. Young people probably have no idea that we in this part of the city had a unionist, James Kilfedder, misrepresent us until Celtic-supporting, Tricolour-draped, Gerry Fitt, later founding father of the SDLP, took the seat in 1966 and did a far superior job of misrepresenting us.

I am not proud to say that in the general election of June 1970 I personated about six times for Gerry Fitt. Which is why, when Sinn Féin stood for election in the 1980s, I was bemused when I heard SDLP saints come across all high and mighty about republicans personating!

Please, will the young constitutional nationalist who lifted all the blank postal votes from Our Lady’s Nursing Home, Beechmount, in October 1982, step forward and explain how he voted thirty-seven times for the SDLP whilst he had dementia, was blind and incontinent?

Since 1983 Gerry Adams has represented this, the cockpit of northern nationalism, apart from the time, between April 1992 and May 1997, when the seat was held by the SDLP’s Joe Hendron. In that election it appears that the UDA, for once, or British Intelligence, got its act together and encouraged the Shankill to vote tactically, realising that only Joe, and not a unionist, could take the seat from Adams.

I admired their strategic thinking, though republicans were apoplectic, and we in prison were very depressed, as prisoners tend to be, between dawn on Sunday and midnight on Saturday. On the very day that Gerry lost his seat, I lost my appeal against an eight-year sentence. However, my afternoon was enlivened when I arrived back in my cell to see that the loyalist across the yard had meticulously crayoned for me a poster, and hung it out his window, which said: ‘GERRY OUT, DANNY IN!’

Anyway, presumably in the next few months, possibly on May 5th, we will have a bye-election for this historic constituency.

Sinn Féin is lucky: it has hundreds of ex-prisoners, and young activists, to choose from: an embarrassment of riches.

The decision to co-opt former hunger striker, Pat Sheehan, to Gerry Adams’ West Belfast assembly seat, came completely out-of-the-blue and fired people with its ingenuity. Similarly, the decision to run Máirtín Ó Muilleoir in the council’s South Belfast ward was to offer to the electorate someone with mettle and substantial experience.

So, who can fill Gerry’s shoes or who should replace him? That person has to be nominated soon, though the triggering of the bye-election is not in Sinn Féin’s gift but resides in Westminster.

Names mentioned include Bobby Storey (Mastermind of… sorry, not allowed to say); Seanna Walsh (who served more time in jail than any other republican – 22 years), Máirtín’s, Pat’s, Jennifer McCann MLA, and Alex Maskey MLA. Alex, it seems, is committed to South Belfast. Sinn Féin took a major decision, to the dismay of many of Alex’s supporters, to withdraw from last year’s Westminster election to encourage some reciprocation from the SDLP in relation to the tight fight in Fermanagh and South Tyrone.

In South Belfast the SDLP’s Alasdair McDonnell merely pocketed the gesture and attacked Sinn Féin in order to ingratiate himself with soft unionists. Despite the SDLP’s haughtinesss and their splitting of the vote in Fermanagh, Sinn Féin’s Michelle Gildernew was still re-elected.

In West Belfast, can we think outside the box, and, if so, what about you, the people, welcoming into this revolutionary neighbourhood, Mr George Galloway!

George is dedicated to Irish republicanism and was here most recently in 2010, when he was a guest on the ‘Gerry Kelly Show’ in St Kevin’s Hall.

Okay, George is a member of the Respect Party, and formerly MP for Bethnal Green and Bow and took his Westminster seat, which, since Arthur Griffith, Sinn Féin’s principles abjure.

But, boy, did George use his status to tear stripes off the establishment!

He is a republican, articulate, personable, loyal and dedicated, and one of the greatest supporters of our Palestinian brothers and sisters. In 2005, when summoned to the US Senate to be humiliated and explain his stance on the Middle East he turned the anticipated outcome on its head and put American foreign policy in the dock.

As an MP he was, of course, not an abstentionist, simply because non-attendance does not have the same historical resonance for British or Scottish-born people as it has for Irish republicans.

If he were acceptable to the people of West Belfast and Sinn Féin, he would probably have to run as an ‘independent’ because of the abstentionist problem.

Last year republicans asked people to vote for Alasdair McDonnell, so why would there be a problem in voting for George, he taking his seat, berating the Brits over Pat Finucane, collusion, the bloodshed they have caused, their war crimes?

I know that in Westminster his incendiary presence would be a voice for the oppressed of this earth. It would be us ‘invading’ them, a major reversal of colonialism, a statement of our internationalism.

On the other hand, I, former editor of ‘An Phoblacht/Republican News’, former national director of publicity for Sinn Féin, former MLA for Mid-Ulster, have no up-and-coming hospital appointments for my haemochromatosis, achalasia, hypertension and chronic arthritis; am completely free and have nothing to do over the life-time of the next parliament!

Just teasing. I would far prefer to be nominated for the House of Lords – within strangling range of a certain Thatcher.