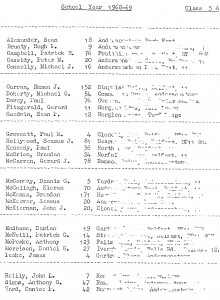 Received in the post today a copy of those of us in class 5A, Glen Road CBS, 1968-1969, forty-five years ago, as the twenty-eight of us prepared to sit our ‘O’ Levels in June 1969. Those of us who passed and who wanted to do ‘A’ Levels had to cross the road and go to St Mary’s Grammar School – which I never liked, and eventually left in September 1970, to go to St Peter’s Secondary in Brittons Parade, Whiterock.

I recognize most of the names and last summer bumped into one of them, Brendan McKenna, who lives in Australia and who was back home visiting. Barney had hardly changed a bit!
A few Sundays ago I met Paddy McNeill who with his wife was doing the Divis Mountain walk. Mickey Connolly became an MD, immigrated to Australia but returned to Ireland. Gerry Fitzgerald became a prize-winning photographer and I saw him at the PA’s Deric Henderson’s leaving do last month. John McKiernan, a great footballer, became a teacher and his son also became my doctor. Michael Doherty (brother of Kieran who died on hunger strike) is still to be seen running and cycling – the fittest of us all!

Peter Cassidy works in the RVH. Another friend’s father was in the RUC and had helped prosecute those involved in the Malvern Street murder of Peter Ward but himself was later wounded (presumably by the IRA) in a gun attack at Springfield Road in 1971. One – who ended up at CBS after being expelled from Garron Tower in 1968 – became a compulsive gambler.
A few more I would see at a distance in town or in West Belfast and acknowledge with a nod.

But the rest? What ever happened to them? Did they stay or leave? Presumably, most are still alive.

Only forty-five years ago!