God May Not Be Great 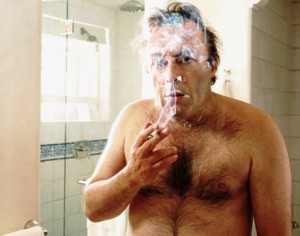 Thoroughly enjoyed Hitchen’s book, ‘God Is Not Great’. His arguments against all religions I found tempting and persuasive… though his uncurbed fanaticism and selectivity caused me to pause once or twice. Seán McGouran in the magazine ‘Church and State’ certainly provides a counterblast to the USA-domiciled English writer.

Hitchens argues that religious faith will never die out until we get over the fear of death and that it is absurd to believe that religious faith causes people to conduct themselves better, or that unbelief makes them behave worse. We learn that Voltaire proposed that his own tomb should be half inside and half outside of a church [that’s what I call “covering one’s bets”!]. Anyway, here are some quotes from the book.

“Literature, not scripture, sustains the mind and – since there is no other metaphor – also the soul.”

“Occasionally, there are injunctions that are moral, and also (at least in the lovely King James version) memorably phrased: “Thou shalt not follow a multitude to do evil” was taught to Bertrand Russell by his grandmother, and stayed with the old heretic all his life.”

“We are reconciled to living only once, except through our children, for whom we are perfectly happy to notice that we must make way and room. We speculate that it is at least possible that, once people accepted the fact of their short and struggling lives, they might behave better toward each other and not worse. We believe with certainty that an ethical life can be lived without religion. And we know for a fact that the corollary holds true – that religion has caused innumerable people not just to conduct themselves no better than others, but to award themselves permission to behave in ways that would make a brothel-keeper or an ethnic cleanser raise an eyebrow.”

“In The Future of an Illusion, Freud made the obvious point that religion suffered from one incurable deficiency: it was too clearly derived from our own desire to escape from or survive death.”

Hitchens takes issue with the sermon of Billy Graham – an anti-Semitist – in the National Cathedral in Washington, following 9/11: “His absurd sermon made the claim that all the dead were now in paradise and would not return to us even if they could. I say absurd because it is impossible even in the most lenient terms to believe that a good number of sinful citizens had not been murdered by al-Qaeda that day. And there is no reason to believe that Billy Graham knew the current whereabouts of their souls, let alone their posthumous desires. But there was also something sinister in hearing detailed claims to knowledge of paradise, of the sort that bin Laden himself was making on behalf of the assassins.”