Guests of the Nation 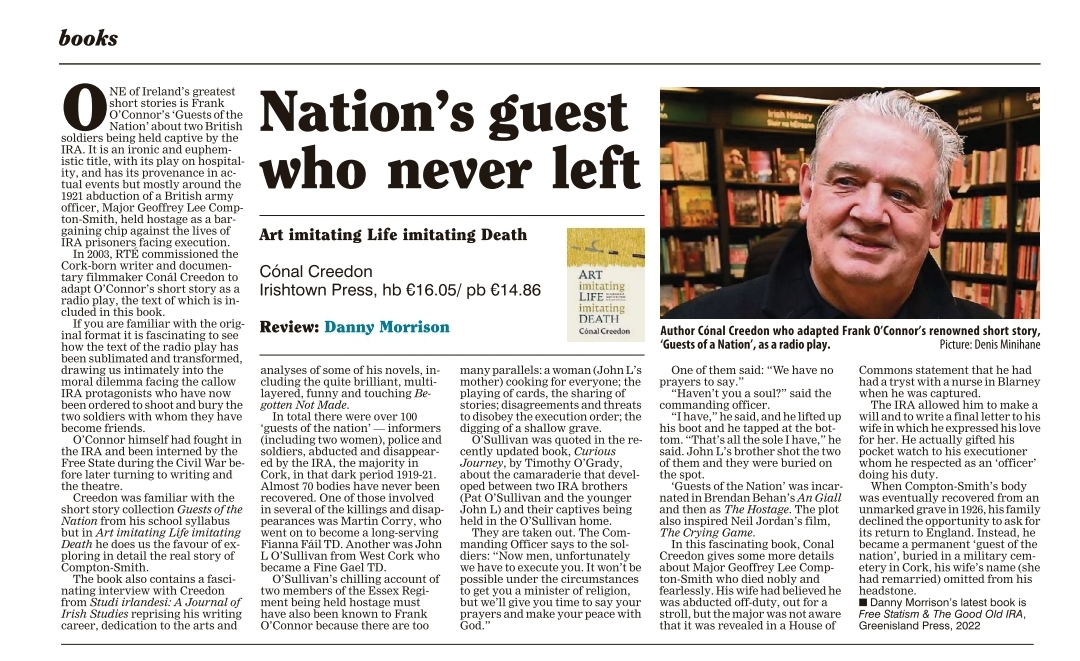 My review of Conal Creedon’s book, Art imitating Life imitating Death, was published in the Irish Examiner last Saturday (17 December).* Here it is:

One of Ireland’s greatest short stories is Frank O’Connor’s ‘Guests of the Nation’ about two British soldiers being held captive by the IRA. It is an ironic and euphemistic title, with its play on hospitality, and has its provenance in actual events but mostly around the 1921 abduction of a British army officer, Major Geoffrey Lee Compton-Smith, held hostage as a bargaining chip against the lives of IRA prisoners facing execution.

In 2003 RTÉ commissioned the Cork-born writer and documentary filmmaker Conál Creedon to adapt O’Connor’s short story as a radio play, the text of which is included in this book. If you are familiar with the original format it is fascinating to see how the text of the radio play has been sublimated and transformed, drawing us intimately into the moral dilemma facing the callow IRA protagonists who have now been ordered to shoot and bury the two soldiers with whom they have become friends.

O’Connor himself had fought in the IRA and been interned by the Free State during the Civil War before later turning to writing and the theatre.

Creedon was familiar with the short story collection Guests of the Nation from his school syllabus but in Art Imitating Life he does us the favour of exploring in detail the real story of Compton-Smith. 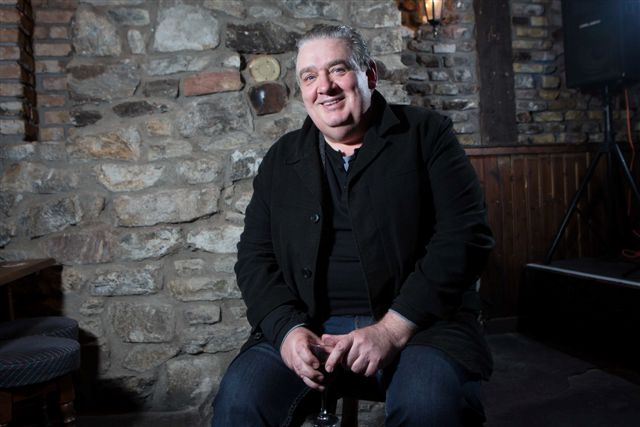 The book also contains a fascinating interview with Creedon from Studi irlandesi reprising his writing career, dedication to the arts and analyses of some of his novels, including the quite brilliant, multi-layered, funny and touching Begotten Not Made.

In total there were over one hundred ‘guests of the nation’—informers (including two women), police and soldiers, abducted and disappeared by the IRA, the majority in Cork, in that dark period 1919-21. Almost seventy bodies have never been recovered. One of those involved in several of the killings and disappearances was Martin Corry, who went on to become a long-serving Fianna Fáil TD. Another was John L. O’Sullivan from West Cork who became a Fine Gael TD.

O’Sullivan’s chilling account of two members of the Essex Regiment being held hostage must have also been known to Frank O’Connor because there are too many parallels: a woman (John L’s mother) cooking for everyone; the playing of cards, the sharing of stories; disagreements and threats to disobey the execution order; the digging of a shallow grave. O’Sullivan was quoted in the recently updated book, Curious Journey by Timothy O’Grady, about the camaraderie that developed between two IRA brothers (Pat O’Sullivan and the younger John L.) and their captives who were being held in the O’Sullivan home.

They are taken out. The Commanding Officer says to the soldiers: ‘Now men, unfortunately we have to execute you. It won’t be possible under the circumstances to get you a minister of religion, but we’ll give you time to say your prayers and make your peace with God.’

One of them said, ‘We have no prayers to say.’

‘Haven’t you a soul?’ said the commanding officer.

‘I have,’ he said, and he lifted up his boot and he tapped at the bottom of. ‘That’s all the sole I have,’ he said. John L’s brother shot the two of them and they were buried on the spot.

‘Guests of the Nation’ was incarnated in Brendan Behan’s An Giall and then as The Hostage. The plot also inspired Neil Jordan’s film The Crying Game. 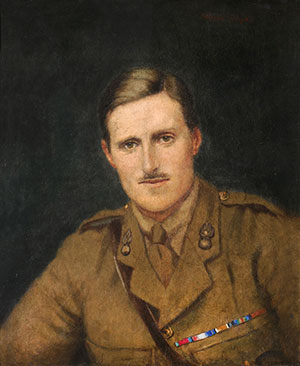 In this fascinating book Conal Creedon gives some more details about Major Geoffrey Lee Compton-Smith who died nobly and fearlessly. His wife had believed he was abducted off-duty, out for a stroll, but the major was not aware that it was revealed in a House of Commons statement that he had had a tryst with a nurse in Blarney when he was captured. The IRA allowed him to make a will and to write a final letter to his wife in which he expressed his love for her. He actually gifted his pocket watch to his executioner whom he respected as an ‘officer’ doing his duty.

When Compton-Smith’s body was eventually recovered from an unmarked grave in 1926 his family declined the opportunity to ask for its return to England. Instead, he became a permanent ‘guest of the nation’, buried in a military cemetery in Cork, his wife’s name (she had remarried) omitted from his headstone.