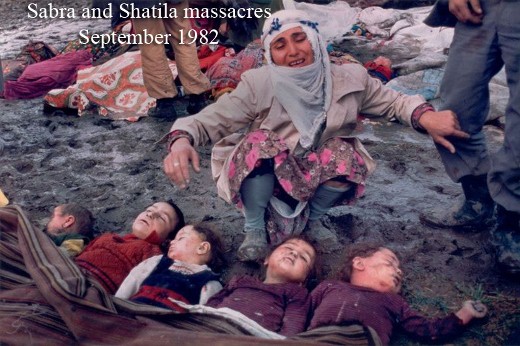 George Bush’s best friend, the Prime Minister of Israel, Adolf Sharon, is a mass murderer, a killer of kids, a war criminal – every bit as guilty as Slobodan Milosevic – for his part in butchering thousands of refugees in the Sabra and Shatila camps twenty years ago. Every day in life he besmirches the memory of the six million Jews who were murdered in the Holocaust by invoking their sacrifice to justify his extermination policy against the Palestinian people.

Any country in the last ten years which has defied United Nations security resolutions, resolutions which the United States has also endorsed, has been bombed and invaded by the United States, usually supported by its lapdog, Britain, especially if the US can’t get NATO or the UN to unequivocally go along with its war-mongering.

Any country, that is, except Israel.

Israel, which is armed, financed and protected by the USA, has defied over seventy UN resolutions since 1967, and can do whatever it likes under the flag of ‘the right to self-defence’, to quote George Bush.

Last Thursday George Bush, forced at last to respond to international pressure and outrage, asked Israel to pull back from its reoccupation of the West Bank. But the Israelis are so pompous and arrogant, and have the measure of the USA, that they feel no need to worry that any meaningful sanctions will follow.

In recent days Israeli soldiers stopped a pregnant Palestinian woman at a checkpoint, watched her give birth and watched her baby die rather than call an ambulance. They have occupied hospitals, destroyed operating theatres and vital medical equipment, and locked out doctors. They refuse Palestinians the right to bury their dead. They have cut off electricity and water, imposed curfews and looted shops, and their tanks have wantonly destroyed property. Captured Palestinian men were blindfolded, handcuffed, marched off, interrogated and then held in a sewer. They were the lucky ones. Other captured prisoners – including five from the National Security forces, including the manager of the Palestinian Authority orchestra – were summarily executed. Some weeks ago Israeli soldiers were stamping serial numbers on detained Palestinians.

What next? Force the Palestinians to sew little yellow crescents on their clothing? It would make sense. The Israeli forces already have them tied down in ghettoes and refugee camps. Forcing them to wear yellow crescents might ensure that Israeli soldiers will only shoot civilians instead of journalists, UN workers, international observers, priests, nuns, and anyone else who gets in Adolf’s way.

The pretext for this latest invasion has been the emergence of the phenomena of Palestinian suicide bombers, who have indeed slaughtered Israeli civilians out shopping, in cafes, at bus stops, in attacks that we consider unconscionable. But what drives someone to commit suicide and take the lives of others if not a sense of desperation and hopelessness, which Israel’s policy towards the Palestinians actually engenders.

Adolf Sharon has exploited the suicide bombings in order destabilize the Palestinian Authority, and destroy the Oslo Agreement, which he has always denounced. Yet, even though there is knee-jerk support within Israel for ‘wide-scale war’ there are signs of change [but not from the USA, which relies on Israel as a crucial bastion and garrison in the Middle East].

Going largely unreported is the fact that several hundred combat officers and soldiers of the Israeli Defence Forces have issued a proclamation declaring that they will not serve in the occupied territories. Some of these soldiers have been imprisoned and harshly treated because they said that all over the Occupied Territories they were “issued commands and directives that had nothing to do with the security of our country, and that had the sole purpose of perpetuating our control over the Palestinian people…”

In a statement reminiscent of the anti-Vietnam war movement, they said that they now understood that the price of occupation “is the loss of IDF’s human character and the corruption of the entire Israeli society… We shall not continue to fight beyond the 1967 borders in order to dominate, expel, starve and humiliate an entire people.”

The media in Israel is gagged, reporting of the peace movement not only censored, but the movement itself physically intimidated, gassed and beaten off the streets. Even last Thursday a CNN camera crew, covering the protests, had their vehicle shot at by Israeli armed forces.

Perhaps the most heartbreaking aspect of the occupation is the effect it is having on Palestinian children. They have sent messages out to the world. One, fifteen-year-old Mizer Jibrin, wrote: “The Israeli soldiers prevented us from going out to the kitchen or bathroom … One of them pushed me forcefully, and started questioning me: what are you doing, what’s your name, how old are you. I answered them, and they were about to beat me, when my father cried, ‘Stop it, stop it, he is a child. Went to use the bathroom.’ Thy released me and broke into our home. They imprisoned my sisters, brothers and me in our small kitchen. And sabotaged our home. They arrested my father and beat him with the other men. They covered their heads with plastic bags, taking them to unknown destinations. I experienced the occupation and I will never ever forget it. I want to say stop your occupation, stop your tyranny and stop your killing, stop…”