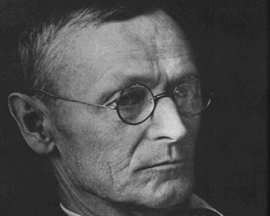 Finished ‘The Glass Bead Game’ by Hesse a few weeks ago but am only now getting around to saying something about it. It was not enjoyable, though parts were. The book improves once Joseph Knecht leaves the ‘ivory tower’ that is Castillia. Following a section of ‘Knecht’s’ poetry there are three stories, also attributed to him.

The story, ‘The Father Confessor’, is about Josephus Famulus, a worldly man who sees the light and becomes a penitent and famous confessor. But then many years later he experiences despair, considers giving up his life and considers suicide. The narrator says: “Certainly a Christian ought to be no enemy of death; certainly a penitent and saint ought to regard his life as an offering; but the thought of suicide was utterly diabolic and could arise only in a soul no longer ruled and guarded by God’s angels, but by evil demons.”

For help he seeks out a Father Dion Pugil, another famous confessor, without realising that Pugil is similarly facing disillusionment, and their paths cross, with positive results. They rediscover their faith and work together. It is only at the end that Pugil confesses that all those years before he had felt the same way as Josephus and he comments about suicide.

“It is not merely a folly and a sin to inflict such a death on oneself, although our Redeemer can well forgive even such a sin. But is also a terrible pity for a man to die in despair. God sends us despair not to kill us; He sends it to us to awaken new life in us.”

Hesse himself contemplated suicide and it is no surprise that the subject turns up in several of his novels.

In ‘Demian’, Demian’s mother tells Sinclair, who admitted contemplating suicide: “Was it only difficult? Wasn’t it beautiful, too? Can you think of a more beautiful and easier way?”

In ‘Steppenwolf’ Harry Haller has suicidal tendencies, though in this part of the novel there is a great last line which I have used in my novel, ‘Rudi’:

“On the other hand, all suicides are familiar with the struggle against the temptation of suicide. Every one of them knows very well in some corner of his soul that suicide, though a way out, is rather a mean and shabby one, and that it is nobler and finer to be felled by life than by one’s own hand.”