How To Steal Votes

The electoral office has been reported in local media as stating that there has been a large increase in applications for postal and proxy votes. Fermanagh and South Tyrone topped the list with 1,500 proxy votes and Newry and Armagh with over 1200.

The story gave rise to a scare story in today’s News Letter: ‘Foster voices fears over explosion in proxy voting’.

But Chief Electoral Officer Virginia McVea told the paper, “it’s entirely lawful”. She added, “no systemic practices that are untoward or illegal” had been drawn to her.

This did not prevent SDLP leader Colum Eastwood adding to the scare by tweeting: “A lot of concern about huge rise of postal & proxy votes in nationalist areas. I can assure people – the SDLP hasn’t been orchestrating it.”

However, after a number of people tweeted that the SDLP itself had been out lobbying people to apply for postal/proxies, Eastwood tweeted: “For the record – there is absolutely nothing wrong with LEGITIMATE postal/proxy votes. We help people all the time.”

People are astute enough to recognise the use of the block capitals for ‘legitimate’ and the intended slur.

Thousands of voters – 60,433 – were removed from the electoral register last year, prior to the Assembly election on the grounds that they had not returned an electoral registration form during the last canvass of electors in 2013. The constituency affected the most was West Belfast were 5,759 lost their right to vote. In Britain people can register online, but not here.

Fourteen years ago I wrote a feature for the Andersonstown News that so-called attempts to clean up the electoral rolls often appeared to have as their objective the removal of voters! I think it timely to reprint the piece so here it is again. 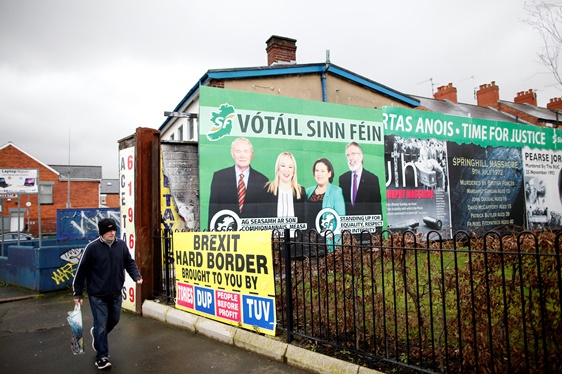 Stealing Votes – The British Way!
The Electoral Fraud (Northern Ireland) Act 2002 was introduced to eliminate voting irregularities and impersonation. But the restrictive nature of the new legislation has had the effect of wiping out thousands of bona fide voters across every constituency in the North.

In 1999, a year before the controversial Presidential elections in the USA, Katherine Harris, George Bush’s presidential campaign co-chairperson and Florida secretary of state in charge of elections, called in researchers from Database Technologies to sift through Florida’s electoral rolls. Their brief was to systematically remove anyone “suspected” of being an ex-felon.

Thirty one per cent of all black men in Florida have a felony on their record and they were immediately struck off, as were thousands of other blacks who had had their voting privileges reinstated (after misdemeanours). Black people overwhelmingly vote Democrat – that is, would have been potential Al Gore supporters. But, as Michael Moore points out in his book, Stupid White Men, the brief to Database Technologies went further and it was instructed to include not just felons, but those blacks who shared similar names to those of felons or had similar social security numbers.

To contest and reverse this mass disenfranchisement would – as the architects, of course, knew – take years, wading through a bureaucratic quagmire for which few people would have the patience or energy. As a result, 173,000 registered voters were placed on the ineligible list; 66% of those who were removed in Miami-Dade, Florida’s largest county, being black.

So, long before all those arguments about ‘hanging chads’, and what were the voters’ true intentions, Al Gore was robbed off the Presidency even though across the USA he received 539, 898 more votes than George Bush. Perhaps, there would have been no difference between Gore’s foreign policy and Bush’s, and he too would have impatiently sidelined the work of UN weapons inspectors in Iraq. Perhaps, he too would have rushed us to war? We’ll never know.

WHAT Katherine Harris did for the voters of Florida the new Electoral Fraud Act 2002 is doing for ‘democracy’ in the North. The right to vote and to exercise one’s vote is critical in determining just who goes into government, opposition or retirement. Mary Harney knows what it is like to sweat for a quota. In the last Westminster election Sinn Fein’s Michelle Gildernew took Fermanagh and South Tyrone from the Ulster Unionists by a majority of just fifty three.

Long before Sinn Fein stood for elections in the North electoral malpractice was common – ‘Vote Early, Vote Often’, being the legendary catchphrase of campaigners who correctly assumed ‘the other side’ was equally engaged in impersonation.

However, when republicans entered the electoral fray and enjoyed success, much of their success was written off as the results of mass impersonation. It was in Fermanagh and South Tyrone in 1981 that IRA Volunteer Bobby Sands, whilst on hunger strike, was elected MP and unwittingly initiated Sinn Fein’s embracing electoral politics. Up to then, republicans had been accused by the British government of being a mere criminal conspiracy without popular support and had been repeatedly challenged to seek a mandate.

However, Mrs Thatcher’s reaction to Sands’ election was the first of many moves to manipulate the political process. In her case she amended the Representation of the People Act, barring any other prisoner from standing for election, rather than negotiate an end to the prison crisis.

In 1982 when five Sinn Fein candidates were elected to the Assembly Northern Ireland Office ministers were instructed not to meet them on constituency matters and to cut them off from receiving salaries and expenses, government publications and press releases. Every time Sinn Fein made inroads the rules were changed: candidates were required to make declarations repudiating the use of violence for political ends; council election deposits were increased from £100 to £1000; former prisoners were barred from standing for five years after their release; and, finally, voter ID was introduced to stamp out what was alleged to be widespread impersonation.

But the Sinn Fein vote continued to increase and in 2001 the party outpolled the SDLP.

Still, the myth was perpetuated that the vote was down to impersonation and multiple registration, even though the only candidate to be brought before an electoral court and found guilty (on an overspending charge) was Joe Hendron of the SDLP.

Last year the British government introduced a new law which required every individual voter to fill out a form, supply their National Insurance Number, date of birth and sign it personally. To vote, an elector has to produce photographic ID: a British or Irish passport, a driving licence, a Senior SmartPass (for pensioners) or the new Electoral Identity card.

The Electoral Office began distributing forms and canvassing last September but when the new electoral register was published in December it showed a drop of 130,000 voters from the previous register. All the main parties in the North had voted at Westminster for the new restrictions and so they couldn’t really raise objections. But when Sinn Fein complained that thousands of people were being disenfranchised, it was upon Belfast West, seat of Sinn Fein President Gerry Adams MP, where the drop was most dramatic with 11,000 voters gone missing, that the media and unionists zeroed in. The implication was that the Sinn Fein impersonation conspiracy was exposed at long last.

This story received wide coverage but was never balanced by the fact that every constituency registered a drop. In fact, Belfast South, with 10,000 missing voters wasn’t far behind Belfast West.

Privately, the Ulster Unionists have been expressing concern with the inefficiency of the registration, while there is anecdotal evidence that the reason for the gung-ho attitude of Paisley’s DUP (which accuses David Trimble of trying to avoid an Assembly election in May) is that it is confident it has registered its supporters.

The Electoral Office, which initially congratulated itself on compiling a list of over one million voters, has been forced to take on board some of the criticisms. How, for example, could there be such a discrepancy between their returns and the official census returns which show that, actually, not 130,000 voters have gone missing, but closer to 187,000? Have they all died in a year, emigrated or were they all imposters?

There is little voter apathy in the North. But there is considerable evidence that forms were not distributed, that homes were not canvassed, that the new forms were not explained to either the elderly or those with learning difficulties, that many forms were not collected, in addition to the fact that those without official ID would find it inconvenient and time consuming to go to the electoral office to be photographed for their Electoral Identity card.

Sinn Fein cite example after example. In one ward in nationalist Newry consisting of over 900 households, almost one hundred (including entire families) have been disenfranchised.

In Gerry Adams’ constituency, an entire side of one street (houses 1-80) in Cullingtree Road, did not appear in the December register.

A comparison of the census returns and the electoral returns show that at least 50,000 first-time voters (and young nationalists tend to vote for Sinn Fein) are not registered.

The restrictive nature of the new legislation, the failure of a more pro-active and cooperative approach from the Electoral Office, and unevenness in the distribution and collection of completed forms have left registration in a mess, with little time left to correct that mess if there are Assembly elections in May. And come May, many people will arrive at polling stations to discover not that their vote has been stolen but that their ID which once sufficed is no longer acceptable.

Katherine Harris must look jealously at the Westminster architects of the ironically, well-named, Electoral Fraud Act. She herself could not have devised a better way of eliminating voters from the register.