Finished ‘Fear and Loathing at Rolling Stone – The Essential Writing of Hunter S. Thompson’. Hilarious and informative writing from the man who invented ‘Gonzo’ journalism, that genre comprising a mix of irreverent, trenchant journalism with literary (or fictional!) elements and where the writer features prominently and which has often been poorly emulated by some Irish journalists. Thompson committed suicide in 2005 with a shot to the head and later that year his ashes were fired from a cannon to the tune of ‘Spirit in the Sky’. Way to go!

Wrote a piece for the Eamonn Mallie website on the thirtieth anniversary of the 1982 Assembly elections which saw Sinn Féin enter the electoral arena.

17th October. Interviewed by Una Bradley from the Irish Times who is writing a feature on Irish republicanism.

9th October. Did radio interview with BBC Sussex on the tout Raymond Gilmour.

6th October. Did interview for BBC television on the burglar/tout Raymond Gilmour’s attempts to sue the British MoD for not looking after him.

5th October. Spoke on platform in Divis Community Centre to commemorate the 40th anniversary of the deaths of IRA Volunteers from ‘D’ Company around this time in 1972, including my friend Jimmy Quigley.

I submitted my feature on Ed Moloney [‘Explain, Ed?’] to the web site Letters Blogatory and was subsequently attacked by Anthony McIntyre. My response was published the following day. I said:

More hot air from Anthony McIntyre. I am on record from the outset as opposing the repatriation of the tapes but that will not stop me from placing the responsibility for this debacle where it fully belongs. They blame everyone but themselves. Promises were made and assurances given to the interviewees that Ed Moloney and Anthony McIntyre could not keep. Anthony McIntyre never cautioned the interviewees about incriminating their comrades (which is the real ‘time-bomb’, so to speak, that he fears). But, of course, that’s somebody else’s fault – it’s Boston College, it’s the ‘Irish News’, the ‘Sunday Life’, the PSNI, Dolours Price (who went “on the rampage” – Moloney), Niall O’Dowd, Danny Morrison etc., etc.

In September 2011, I wrote: “The organisers and some participants provoked this court case – though we have a duty to defend the confidentiality of the archive though not alone on the spurious grounds suggested by the organisers.”

It wasn’t I who published ‘Voices From The Grave’, a book that slanders many republicans (including myself) who were never given the opportunity to defend themselves. It was the authors who broke the confidentiality of the archive and brought attention to it as a source of potential evidence. It wasn’t I who made the television documentary based on the book but Ed Moloney.

Did Anthony McIntyre or Ed Moloney never anticipate the obvious – that the family of Jean McConville (among others) were bound to press the PSNI for the tapes for their possible (though questionable) evidential value?

Regarding their belated concern for the peace process: have they any idea of the laughing stock they are in the eyes of many republicans and hard-working Sinn Féin activists and elected representatives who have been riled and ridiculed by both men for more than a decade? Anthony McIntyre scores an own goal by suggesting that part justification by the Belfast judge for turning down his judicial review were words that I had written but omits to say that it was his writings and outlook I was quoting and responding to!

If you criticise McIntyre or Moloney you are an agent of the state! If you offer support to the campaign, as Niall O’Dowd recently did, you are called “one of the world’s great ass-holes” (The Broken Elbow – Ed Moloney). How to win friends.

I hope the tapes are not repatriated. I have met with some of the interviewees who deeply regret ever participating. Should there be a delay in the schedule for judicial hearings then the last hope may well rest with the political lobbying and with the hope of an Obama victory.

If the PSNI’s attempts fail then I want to see the worst oral archive project in the history of the world destroyed for good. That’s the least that Ed Moloney and Anthony McIntyre could do to make amends.

1st October. Posted a piece in reaction to the latest debacle around the Boston College Belfast Project. 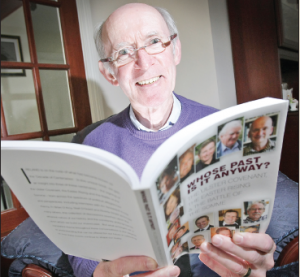 20th September. At the launch in the Linenhall Library of Jude Collins’ new book ‘Whose Past Is It Anyway?, for which I was interviewed.

17th September. Interviewed via Skype by Debamitra Kar, a research student of English literature at the University of Calcutta, and Assistant Professor at the Dept of English,Women’s College, who has chosen for her project a number of novels on the subject of modern conflict, including my book, ‘The Wrong Man’.

14th September. Met with Peter Brehony from Derby who is doing a PhD on republican prison writings.

4th September.  Hosted Nettie Douglass and Don Mullin at a Féile event. Nettie spoke about the life and times of her great-great-grandfather, Frederick Douglass, a former slave who escaped and went on to become one of the great American anti-slavery leaders of the 1800s and who visited Ireland at the time of the famine.

29th August. Interviewed by Graham Spencer for the third or fourth time about his book on Irish republicanism.