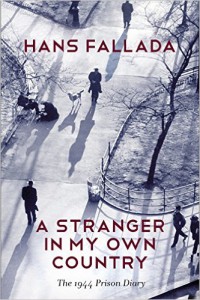 A Stranger in My Own Country: The 1944 Prison Diary by Hans Fallada has been described as, ‘An outspoken memoir of life under the Nazis written from a prison cell’ (Independent), but which has also been viewed as an apologia because Fallada decided to live in Nazi Germany instead of leaving as had many other artists. He was in an institution for the criminally insane, the asylum at Strelitz, after discharging a weapon when having an argument with his estranged wife Anna with whom he was still living. In prison he secretly wrote this diary in tiny writing on the manuscript of another work-in-progress, his novel The Drinker. Initially, he shared a cramped cell with ‘a schizophrenic murderer, a mentally deficient and castrated sex offender and another mental defective locked up for attempted rape and murder.’

The book was edited by Jenny Williams and Sabine Lange and translated by Allan Blunden.

Fallada emphasises that he loves Germany: ‘I am a German, I say it today with pride and sorrow still, I love Germany, I would not want to live and work anywhere else in the world except Germany. I probably couldn’t do it anywhere else. What kind of a German would I be if I had slunk away to a life of ease in my country’s hour of affliction and ignominy?’

Re the pronunciation of his surname.

He is approached by some Brown Shirts: “‘Are you Fallada?’ one of them asked. Except that the speaker didn’t say ‘Fállada’ with the stress on the first syllable, which I prefer, because it sounds a bit like a triumphant blast on the trumpet; instead he pronounced it ‘Falláda’, which always sounds like someone who’s about to trip over and fall flat on his face.’

On German Jews:
‘And then came the time when the new regime seized power, and everything changed. Now Paulchen and Leopold Ullstein were always in a huddle, they always had something to discuss, and whenever somebody else came into the room they stopped talking. They were the Jews, and we were the gentiles, they belonged together, and we were the outsiders. During those weeks I came to understand that in the hour of danger a Jew feels closer to another Jew, however much they disagree and differ, than to his truest friend of non-Jewish blood. I realized that the Jews themselves are the ones who have erected this barrier between themselves and other nations, which we refused to believe when the Nazis claimed as much; and that it is the Jews themselves who feel the difference in blood, and insist on it, when we had always smiled at the notion. This realization did not make me an anti-Semite. But I did come to see the Jews in a different light. I’m sorry, but that’s just how it is. I really hate to say it: but I can’t alter the fact.’

On those exiles who attack he and his like for staying on:
‘I’m sure it was all very fine to be sitting in Paris or Prague and exhorting us German writers to engage in active resistance against the Nazis: ‘Refuse to obey them! Sabotage their initiatives! Call the people to arms! The fate of Europe lies in your hands, you are the spirit and soul of Europe!’ And so on – there was plenty more of this tripe, written from some safe haven. It all sounded fine and dandy, as I say, but to commit suicide cheered on by a bunch of émigrés did seem somewhat pointless to me.’

‘…. Following a long period of complete despondency and creative drought, I had written this long novel in one go; the passion for writing, the rush I get from creating characters and developing them, seem to be indestructible in me.’

A true story that makes its way into Alone In Berlin:
‘The former party comrade was disappointed, and fixed him with a steady gaze: so much for loyalty to the cause! To hell with them all, then! He hesitated a moment, they were about to part, and then he said: ‘Well look, we can still be friends – you go your way and I’ll go mine! But could you do me a favour? I’ve got this great heavy suitcase here. I’ll be back in Berlin in two days, and I’ll pick it up from you then. Could you hang on to it for me until then?’ And Sas, always friendly and ready to oblige, took the suitcase, carried it home, put it down somewhere and forgot about it. Weeks went by, and he suddenly noticed the suitcase again because it was in the way. ‘Well fancy that!, he thought. ‘The good comrade didn’t come back for it in the end – maybe the old fox has been snared by his enemies after all?’ The suitcase really was in the way, and so he put it up in the attic. Then he forgot about it completely.’

…‘And then one day he was arrested without warning; his former comrade had indeed been caught, and now the wretched man had named no fewer than thirty-five people, men, women and girls…

‘The suitcase was discovered, inside was a portable printing press, which had been used to produce Communist pamphlets. A few printed copies were also in the case. But even now all was not lost, the evidence against him was not that damning – despite having been denounced by his former party comrade…’

More on the exiles:
‘And meanwhile these fools are sitting comfortably abroad, not in any kind of danger, denouncing us as opportunists, as Nazi hirelings – blaming us for being weak, for doing nothing, for failing to resist! But we have stuck it out, and they have not; we have lived with fear every single day, and they have not; we have done our work, tilled our acre of land, brought up our children, our lives constantly under threat, and we have spoken a word here, a word there, giving each other strength and support, we have endured, even though we were often afraid – and they have not!’

On lending money:
‘In short, we learned the truth of the saying that the quickest way to lose friends is to lend them money.’

Funny anecdote: ‘A farmer who had had too much to drink told people in the pub that he had a cow in his shed that looked just like Adolf Hitler. The farmer was taken to court and given a lengthy prison sentence.’

Defeat of Hitler:
‘I wanted the Nazis to be defeated, and the sooner the better. Under no circumstances did I want Germany to become the dominant power in Europe.’

‘Inward migration’ – editor’s note:
“This defamation of German émigré authors, which serves first and foremost to justify Fallada’s own decision to remain in Germany, contains the central argument of ‘inward emigration’, which was wheeled out after 1945 in the increasingly bitter argument between ‘those who had stayed behind’ and the ‘émigrés’. So for example Frank Thiess (1890– 1977), who famously clashed with Thomas Mann on the issue, claimed that it had been a great deal harder to live through the ‘German tragedy’ in Germany than to pass comment on it from the ‘boxes and orchestra seats of other countries’.”

More…
“This ‘unpolitical writer’ is here making his first profession of political faith. It is revealing and instructive – but it fails to convince. Fallada is one of that group of artists who did not leave Germany during the Nazi years. So his memoir sets out to justify his actions. With his ‘catalogue of sins’ as a writer he finds himself the target of accusations and reproaches. His account reveals the bitterness and contradictions of those artists who felt they had no choice but to ‘stick it out’ in Germany and do what they could to defend the great German ‘civilized nation’ against the primitive violence of ethnic nationalism and racism. Like Ernst Jünger, Fallada believed that he had shared in the ‘tragedy of his people’. Those who emigrated, fleeing into ‘comfortable’ exile, were ‘slinking away to a life of ease’ in the country’s ‘hour of affliction and ignominy’.”

More…
“The phrase ‘inward emigration’ was coined by Frank Thiess as early as 1933 – he too rejected the idea of German exile from the outset. After 1945 the rift between the émigrés and ‘those who had stayed behind at home’ grew deeper. The claim made by Thiess – that by ‘sticking it out’ in Germany he had acquired a ‘rich store of insights and experiences’ – culminated in the imputation that it had been harder ‘to preserve one’s identity here than to send messages to the German people from over there’. This egregious defamation of German authors in exile elicited an unusually sharp riposte from Thomas Mann. He argued that the literature of ‘inward emigration’ had forfeited any claim to the status of resistance literature. ‘It may be superstition, but in my eyes any books that could be printed at all in Germany between 1933 and 1945 are less than worthless, and not the kind of thing you want to pick up. The smell of blood and infamy clings to them. They should all be pulped.’”

Editor says: Fallada “is compromised by the revised ending to Iron Gustav, rewritten along the lines suggested by Goebbels. Indeed, Fallada found himself having a lot more to do with Goebbels’ Propaganda Ministry than he was comfortable with – as the Prison Diary also attests. So we see the author who was celebrating in ‘Schlichters Wine Bar’ in February 1933 turning up five years later in the Hotel Kaiserhof, where the Nazi state held court, and where Fallada now took part in discussions about a proposed project with the ‘National Actor’ Emil Jannings. The claim of the authors who had ‘stayed behind at home’ that they had opposed the regime, even if their opposition had to be read between the lines of their texts, was dismissed early on by Thomas Mann as a strategy doomed to failure.”