I Remember It Well 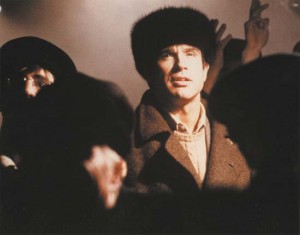 Fascinating feature in today’s ‘Washington Post’ about the way memory works and the decisions a writer takes when creating a memoir [as allegedly distinct, of course, from an autobiography where the rules are supposed to be of a higher standard].

It reminded me of writing a letter from prison to my partner in which I said the following:

“When I changed the radio station an old song was playing from a film you once recommended in 1982 and which I eagerly went to see in Dublin and reviewed.

Do you remember ‘Reds’, about the American journalist John Reed, the legendary playboy who became the legendary revolutionary? Towards the end of the film, Louise Bryant is sitting in a rocking chair, bereaved, lost to the world, in sad reverie, singing a lullaby:

I’ll be your sweetheart

If you will be mine.

I’ll be your Valentine

Keep them and be true.

Will be to marry you…

“Do you remember that scene? Sad and beautiful. It seems no two people can have an equal relationship. Bryant lived in Reed’s shadow. But listen to me – there is joy and happiness before us. After all, wasn’t I born with a caul on my head? Haven’t we been blessed and lucky so far. I am the eternal optimist, as you know. My Uncle Harry was sentenced to death by hanging in 1946 but within three years was walking free! That is life. So don’t be depressed and never despair.”

Nine years later – after I was out of prison – I published a selection of my letters as a book, ‘Then The Walls Came Down’. However, when checking the lyrics didn’t I discover that it was a completely different song, one called, ‘I Don’t Want To Play In Your Yard’, which is featured at the end of the film! Now, I could have simply changed the lyrics for the sake of fidelity to the actual film or stayed with what false memory had suggested, a completely different song. I decided to publish what was in the original letter because hearing the song on the radio had triggered my memory of ‘Reds’.

From a Memory Comes a Memoir

In which an author questions whether the unforgettable moments of his life really happened.

Every memoir needs a story. And every story starts with memory — an image, an idea, a fragment of a conversation, that is added to or subtracted from, until finally some version that feels like the truth emerges. Truth here is relative — if we don’t have an accurate, contemporaneous record of the events we are describing, then truth is the most plausible story our memory, or collective memories, conjure. I have an example. I believed, until a few years ago, that my first memory was of being in my grandmother’s arms, watching mosquitoes getting zapped in one of those high-intensity, black-light bug catchers. I was sure this was in Japan, where I was born, and I even recalled what my grandmother was wearing — a scratchy wool dress that smelled of mothballs. I even wrote that memory down as part of a story about my grandmother’s passing. However, we moved from Japan to Ossining, N.Y., when I was about eight months old. So, either I remember something from before I was eight months, which is unlikely, or, it happened later and I misplaced it in my own chronology, or it never happened. It feels real — more real to me, in fact, than my memory of breakfast this morning — but did it happen? And, from the memoirist’s standpoint, does it matter?

Memory, neuroscientists now believe, is a pattern or grouping of neighboring neurons firing in the brain in reproduction of the initial pattern that fired when the actual experience happened. Each time that experience is recalled, it triggers a similar pattern of neurons, thus strengthening the memory while at the same time altering it; the grouping may lose a few neurons and gain a few new ones. A memory, in other words, is nothing more than a chemical reaction that is subject to the same variations and inconsistencies as any other human endeavor; we can be no more sure of the accuracy of our recollections than we can be of, say, the accuracy of the next foul shot in basketball. A falsehood can be deposited in the brain and reinforced almost as easily as a true-life experience. Memory is fallible, we all acknowledge that, yet a memoirist is expected to report a version that is true to life.

I am in my grandmother’s arms and watching those mosquitoes fly to their deaths in that blue light.

But how is that possible? It isn’t. How could an eight-month old comprehend what was happening? It could not have happened the way I remember it. Yet that pattern of neurons fires over and over, the same grouping telling me that it happened, that it is true.

So, if a memoirist’s job, on some level, is to sift through and filter those experiences that somehow added up to the person the writer is today, and to present those in some form, chronological or categorical or geographical, that has an internal or narrative logic, then what does one make of a memory — that is, the chemical processes that create a memory — that simply could not have happened? Perhaps that process influenced the memoirist even more than the actual events. Putting aside for a second the need to entertain the reader and the murkier issues of commerce that can also influence a writer’s decision to include or exclude material, and assuming that I am acting in good faith here, then what do I do with the memory that simply could not have happened? In this case, I have to admit, that I am mistaken. Yet . . .

I am there, in my grandmothers’ arms, cheek pressed against that scratchy wool . . .

There is another troubling category of personal history for the memoirist: the memory that you believe is your own but that turns out to have been implanted by someone else. In writing “Boy Alone,” my most recent book, about my family and my autistic younger brother Noah, I came up against this problem frequently because my father, Josh Greenfeld, had written three books about our family, the best known being “A Child Called Noah.” He had been writing about my childhood throughout my childhood, so there it was, a record, supposedly, of what had happened. I had not reread those books since I was a boy myself — in fact, “A Child Called Noah” was published when I was 7 years old and was perhaps the first grown-up book I ever read.

As I looked again at my father’s books, for the first time in decades, I was struck by how the events he describes — a day trip to the Croton-on-Hudson Dam, an afternoon playing football in the backyard where I became frustrated because I dropped a pass — were remarkably similar to my own versions of those occasions and places, so similar, in fact, that I had to wonder if I was simply remembering having read his books as a child. Had some of my earliest memories actually been implanted by reading my father’s book about our family as a very young child?

Many of us have recollections that turn out to have been created or nurtured by family photos we have seen or stories we have been told. But most of us aren’t writers setting down a life’s story. One could argue that the more fortunate memoirist is the one who doesn’t have another writer also weighing in on his childhood, who doesn’t measure his own memories against those of some external, recorded source. My father’s books were invaluable on the whereabouts of our family, the dates and places and names. I found confusion, however, when my father’s version of events was at variance with my own. His seemed more tangible: there it is, written down, in diary format even. (He, though, has even admitted to me that his editor had him move a few entries around, because there were some blank periods where not much was going on with our family. In other words, even this diary of our family was a little modified for the sake of clarity and story.)

My own memories, against this published account, may have seemed less substantial initially, but they were, I ultimately concluded, my memories. And this was my book about my family, and I felt that if I didn’t stay loyal to my own versions of events, then why bother to tell this story? I made a decision: I would adhere to my father’s chronology and geography — hence my admission that watching those mosquitoes in my grandmother’s arms could not have happened when it did. I would also use his recounting of the various treatment and therapy options that were explored for my autistic brother — and even here, remarkably, I have differing recollections of where we were and who treated Noah.

Yet in some instances, I had to give credence to my memory over my father’s or my mother’s versions of events. For example, in the early 1970s, when 5-year-old Noah was in the pioneering autism treatment program administered by the psychologist O. Ivar Lovaas, UCLA would send undergraduate psychology majors to our house. They would earn a few credits teaching Noah and would provide my parents with an hour or two of respite. The behavioral program Lovaas was developing included the use of aversives, light slaps, spanks, pinches and, in the most extreme cases electric shock, to get the autistic child to focus. (My parents forbade the “shock stick.”)

One afternoon, while a tall, brown-haired student in a short-sleeve, button-up, light blue shirt was at our house, I was the one acting out instead of Noah. I was having a tantrum about my dinner; I had my heart set on something I didn’t get. My parents and this student stood at the doorway to my room, and my mother jokingly suggested, “Why don’t you condition him?” — a reference to the fact that these students were sometimes applying physical aversives to Noah. The student misunderstood my mother’s joke, strode over and began spanking me on the butt. She quickly stopped him, and he was ordered to leave. I believe I was able to have whatever I wanted that night for dinner. My father never wrote about that afternoon; my mother doesn’t recall it. Yet I am sure that it happened: You remember being hit by strangers. In this case, I am unwilling to credit any other version but my own.

It happened. Ah yes, I remember it well.

The memoirist’s ultimate responsibility is to himself, his own version of his life, his truth and reality. If he does not stay faithful to that story, then why is he bothering to write it at all? So . . .

I am in my grandmother’s arms, held fast, gazing at mosquitoes and blue light and fascinated by the abrupt sizzle of bug hitting current.

Karl Taro Greenfeld, a journalist and fiction writer, is the author of “Boy Alone,” “Speed Tribes” and “Standard Deviations.”