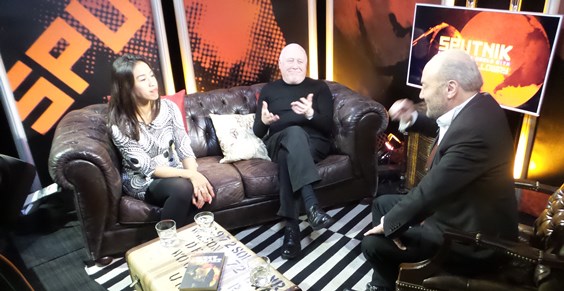 Just back from London where I was interviewed about my novel West Belfast by George Galloway MP and Gayatri Pertiwi for their television programme Sputnik on Russia Today (to be broadcast on Saturday 24th January. About 13.30mins in).

“If there were many other people who loathed the borders between countries as I do, then there would be no more wars and blockades. Nothing on earth is more disgusting, more contemptible than borders. They’re like cannons, like generals: as long as peace, loving kindness and peace go on, nobody pays any attention to them – but as soon as war and insanity appear, they become urgent and sacred.”

Hesse has written a lot about wandering and homesickness but says that, “Every road leads us wanderers too back home.”

21st January. Interviewed by Lauren Dempster, a Postgraduate Research Student at QUB, on the subject of the ‘disappeared’ as one element of the broader ‘dealing with the legacy of past violence’.

19th January. Interviewed on Talkback regarding Project Petra between the BBC’s children programme Blue Peter and MI5 aimed at finding three junior wannabe spies, aged between 8 and 14. Was critical and sceptical of whether kids would get to see the truth behind the illegalities practised by MI5, particularly its dirty war in the North.

18th January. Finished The Narrow Road To The Deep South by Richard Flanagan, which won the 2014 Man Booker Prize. Good book but too long.

14th January. Interviewed on The Nolan Show regarding the ‘On The Runs’ controversy and the evidence given by former PM Tony Blair to the Westminster committee investigating the scheme.

6th January. Interviewed by Tracey Iceton, a PhD student in her second year of a practice-led creative writing doctorate at Northumbria University. The title of her thesis is ‘Troubles Women: A creative-critical exploration and re-writing of the portrayal of female characters in twentieth and twenty-first century Troubles fiction.’