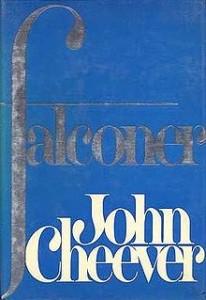 Read ‘Falconer’ by John Cheever, the great writer who died in 1982. Read his ‘Journals’ two years ago, though have yet to transcribe my notes. Falconer is the name of the prison where Farragut, a war veteran and drug addict, is incarcerated for murdering his brother. The descriptions of the American jail are very real – moving and funny, and include incidents of the opportunistic homosexuality. A variety of characters summarise their life stories. One of the longest serving prisoners, a man nicknamed ‘Chicken’, when he complains, is reminded by a prison warder, ‘In twelve years nobody come to see you. That proves that there ain’t nobody on the street who knows your name. Even your own mother don’t know who you are. Sisters, brothers, aunts, uncles, friends, chicks – you ain’t got nothing to sit down at a table with. You is worse than dead. You shit. The dead don’t shit.’

A philanthropist pays for the prisoners to have a photograph taken (in October) beside a plastic Christmas tree which they can send to their families. Chicken sends his to, Mr and Mrs Santa Claus. Icicle Street. The North Pole. ‘The photographer smiled broadly and was looking around the room to share this joke with the rest of them when he suddenly grasped the solemnity of Chicken’s loneliness.

Later, when Chicken dies we learn that he had strangled an old woman for eighty-two dollars.

Farragut is besieged my memory: ‘He was always left irritable at the fact that his memory could, quite independently of anything he knew about himself, manipulate its resources in controlled and repeated designs. His memory enjoyed free will, and his irritability was increased by his realization that his memory was as unruly as his genitals.

There are two unrealistic escapes described in the book – but whom am I to complain given the allegorical ending of my own ‘gay’ novel, ‘On The Back Of The Swallow’!