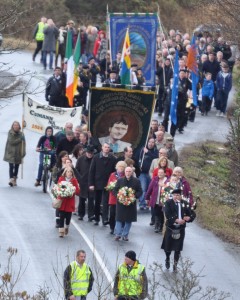 Last Saturday (16th March) I spoke at an event in  County Donegal, to commemorate Kevin Brady who was killed twenty-five years ago during the funerals of the three IRA Volunteers killed in Gibraltar. Good turn-out. Very emotional.

15th March. Introduced Senator David Norris and William Crawley at our guest interview event in Colaiste Feirste as part of Féile an Earraigh.

12th March. Myself and Tony Macaulay read from our new novels in the Falls Library. Later I was interviewed by Marie-Louise Muir for BBC’s Arts Extra.

11th March. Introduced Gerry Adams TD at launch of Irish language CD in Culturlann as part of Féile an Earraigh.

7th March. Did interview with Sven Bollens, a KU Leuven Master student working on his dissertation about the public support for the IRA during the conflict.