The newly-inaugurated  Liam & Tom O’Flaherty Society’s first Summer School has just been announced to take place on Aran between 23 and 25 August. It is open to members and non-members alike and booking details can be got by emailing Jenny Farrell – Jenny.Farrell@gmit.ie

The Summer School is integrated into an international cultural festival on Aran, taking place on the same weekend. These events are included here in italics to distinguish them from those of the Liam and Tom O’Flaherty Society. However, all events are open for everybody to attend. 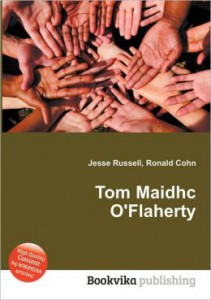 Friday, 23 August
6.30pm. Fáiltiú agus Oscailt Oifigiúil/Official Opening and Reception Kilmurvey House
Saturday, 24 August
10am. Kilmurvey House
‘Thar Farraige Anonn’-Oileánaigh San Am a Caitheadh agus Anois/’Going Beyond the Sea’- The reach of Islanders Past and Present
11.15am  Ferry arrives in Cill Rónáin – Transfer to Kilmurvey House
12 noon: Kilmurvey House
Lecture, in English, by Brian Ó Conchubhair: “Liam O’Flaherty: The Missing Years” (“Liam Ó Flaithearta: Na Blianta Amú”)
Brian Ó Conchubhair is Associate Professor of Irish Language and Literature and Acting Director of the Center for the Study of Languages & Cultures at the University of Notre Dame.
2.30pm: Gort na gCapall: Walk to sites depicted in O’Flaherty stories, their homestead etc., conducted by Máirín Uí Fhátharta, this will include some readings of their works. The walk will commence and end at O’Flaherty’s house in Gort na gCapall.
4pm: Oatquarter School/Scoil Fhearann an Choirce. Launch of the new edition of Liam Ó Flaithearta’s book of short stories, Dúil, published by Cló Iar-Chonnacht.
8pm. Aran on Stage and Screen- Cill Rónáin Cinema and Internet Café Screening of an O’Flaherty film
Céilí