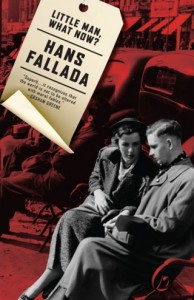 I stayed up, rather than read in bed, and about twenty past midnight I finished the last sixty pages of ‘Little Man, What Now?’ by Hans Fallada. My eyes were sore but it doesn’t matter as I no longer enjoy a full night’s sleep because of severe arthritis in my feet and take pain killers during the night, most nights, to deaden the pain. I bought the book through a great website which recycles books called Green Metropolis, a community of book lovers where most paperbacks and hardbacks can be purchased for under £4!

I enjoyed ‘Little Man, What Now?’ but I don’t think that in stature it comes anywhere near, ‘Alone In Berlin’. It is set in 1931 in the dying days of the Weimar Republic on the eve of Hitler coming to power and is the story of an impoverished couple, struggling to survive, Hans Pinneberg and his pregnant girlfriend/wife Emma ‘Lammchen’ (lambkin). The style is very simple and the two main characters extremely innocent and vulnerable – though Hans rages against the world and the oppression of the small fellow by bureaucrats and work colleagues who have no loyalty or solidarity towards each other. Lammchen’s naivety can be infuriating, though she also acts to calm down Hans. There is a wonderful scene when to please her he spends most of his extremely meagre wages on a dressing-table with a mirror (which she so desires but knows they cannot afford for a few years yet). She also has asked him that maybe one day, again she know it will be many years in the future, they can go out to a fancy restaurant and blow a lot of money, just for the experience.

Pinneberg stares at the dressing-table, “Then quite determinedly: ‘I want it and I’m going to do it. Just once in my life I want to have been like that, and hang the consequences.’ A little bit further down the line, and that is the mood in which a man steals, fights and kills. And it was in this mood that Pinneberg bought a dressing-table.’

Incredibly, Fallada wrote this book in just sixteen weeks! In an Afterword by Philip Brady we learn that by the time the novel was published Fallada had spent nineteen months in a mental hospital and a total of over two years in prison.

“By the end of his life he had been variously institutionalized for some seven and a half years. The anguish began early: school was a torment, he was isolated, was bullied by those around him and a prey to constant, serious illness. To keep away from school he inflicted illness on himself by drinking quantities of vinegar, which produced a deathly pallor. In October 1911 at the age of eighteen he fought a duel with a fellow-pupil, killed him, failed to kill himself (this was not his first suicide attempt) and was charged with murder. From January 1912 until October 1913 he was confined in an institution. Soon after his release he became a morphine addict.”

Brady also says that contemporary reviewers praised its realism and authenticity and stressed the novel’s social relevance, “the general significance, the symptomatic character, of the seemingly insignificant lives led by its central characters.”

And now I must find Fallada’s novel, ‘The Drinker’!