Living To Tell The Tale 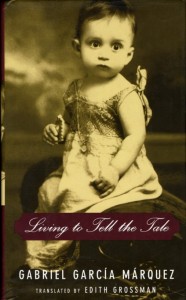 Today, 28th January, I bought a lot of books on one of my regular raids on the War on Want & Oxfam bookshops on Botanic Avenue; and in NO ALIBIS shop got a hardback copy of ‘Chandler – Later Novels & Other Writings’.

So, for £8.75 in the War on Want shop I got ‘Living To Tell The Tale’ by Gabriel García Márquez, the first volume of his autobiography; ‘The Golden Notebook’ by Doris Lessing; and ‘The Finkler Question’ by Howard Jacobson, who won the Man Booker Prize with this novel in 2010.

And, for just over £11 in the Oxfam shop (which has a great selection of biography and antiquarian books), I got ‘Novels and Novelists’ (large hardback) edited by Martin Seymour-Smith, and worth it for the photographs and illustrations alone; ‘Closely Observed Trains’ by Bohumil Hrabal; ‘A Concise Chinese-English Dictionary For Lovers’ by Xiaolu Guo (because I loved the title and laughed at the first page I opened at random); and ‘Clair de Lune’, a novel about Claude Debussy by Pierre la Mure, author of the 1950 novel ‘Moulin Rouge’.

And now I am in clover!

27th January.  Interviewed on Skype by Peter Breheny on the subject of prison writings.

18th January. Finished ‘The Ten Most Beautiful Experiments’ by George Johnson. Apart from Chapter 1 about Galileo measuring the acceleration of a ball down a smooth, inclined plane [!], it was very disappointing.

15th January. Phoned into Radio Ulster’s ‘Sunday Sequence’ whilst Anthony McIntyre was being interviewed about the Boston College archive fiasco. On the programme he admitted to William Crawley that he had not sought independent legal advice about the security of the interviews he was carrying out with former IRA Volunteers.

12th January. Wrote a piece rebutting Richard O’Rawe’s claims about the 1981 hunger strike which was published in today’s Andersonstown News.

11th January. Attended the official opening of the newly refurbished Falls Library. In the afternoon I attended the funeral of veteran republican, Brigid Hannon.

8th January. Participated in panel discussion, Radio Ulster’s ‘Sunday Sequence’, on the subjects of the Boston College archive and how we deal with the past. Other guests included security commentator Brian Rowan, former Ombudsman Dame Nuala O’Loan and, on the line, former loyalist prisoner William ‘Plum’ Smith. Summing up at the end I said something along the lines that the writing of History “is the continuation of war by other means.”

6th January. Interviewed on the Pat Kenny show (RTE) along with Dr Eamon Phoenix and Eamonn Mallie about the state papers from 1981.

Wrote a short piece for the News Letter on ‘The Iron Lady’:

Meryl Streep is Margaret Thatcher’s doppelganger in this film, to such an extent that she arouses deep-seated feelings of hostility towards what is really only a character, so powerful and persuasive is the performance. Equally, I suppose, for one ignorant of the real Thatcher, the opening scenes of the film with its close-up examination of the cruelty and tragedy of dementia can be quite moving. I can understand why her family would consider this aspect an invasion of their mother’s privacy and vulnerability, and why David Cameron would much prefer the film to have been more about her ‘political’ success – and perhaps more a hagiography?

The film is about three days in the life of a frail, isolated and fairly lonely old woman with dementia, who was once one of the most powerful leaders in the West, and who looks back on her life in fragments, the fame and the glory, the Falklands victory, but not the infamy and the inglorious, or the suffering that her policies inflicted on people in Ireland and mainly the working-class in Britain.

To say that Thatcher was controversial would be an understatement. The way she is depicted in the film mistreating her own ministers, humiliating Geoffrey Howe to such an extent that reportedly he was reduced to tears, is telling of the way she would treat those beyond her circle, beyond her experience, beyond her class. Ironically, she herself emerged from the lowly, lower middle-class, but she had plenty of attitude and ambition, took on the Tory grandees to overcome their resistance to a female leading the party, only later to be ditched by the men in grey suits when she became an electoral liability.

Her policies in Ireland, her obduracy and intransigence, was, of course, responsible for many deaths (and not just the ten hunger strikers). She was PM during the shoot-to-kill operations, was PM when Pat Finucane was assassinated and when collusion was at its height (to judge by the limited extracts Sir John Stevens was permitted to publish).

For me, the most enjoyable parts of the film, were, surprisingly, those scenes involving Denis Thatcher (Jim Broadbent) playing the knave, the jester, and sometimes rebuking her for ignoring the home. If that was the ‘real’ him, it was a side we rarely witnessed.