‘Love Matters’ by Gary Mitchell is much in the vein of his ‘Billy’ plays, so-to-speak, which deal critically and show little sympathy with the domestic lives of loyalist paramilitaries, usually the UDA (which actually drove Mitchell out of his North Belfast home). I was invited by Aisling Ghéar Theatre Company to take part in a panel discussion after a performance of the play in Culturlann on Thursday night (1st March).

This play about loyalism was unique in that it was performed in Irish with a simultaneous translation in English and I thought it well-written, taut, and brilliantly acted by a great cast, not all of whom were gaeilgeoiri. Participating in the discussion chaired by journalist Finola Meredith were Gary Mitchell, Brian Ervine (a school teacher and former PUP leader) and Brid Ó Gallchoir (one of the directors of the play).

The play, I imagine, is set around 1994/1995 and the storyline concerns the imminent release of a senior loyalist life prisoner, Big Ernie, who just learns that his wife wants a divorce. Unknown to him his wife is having an affair with a much younger man, the son of the RUC detective who jailed Big Ernie. There is much discussion about the criminality and coarseness of the UDA and we are intrigued whether Ernie’s wife Julie can escape the ghetto with Brad (whose ambitions, pathetically, scale no higher heights than them jointly opening a chip shop). All the actors were excellent but Diarmuid Murtagh as the jittery UDA gunman, Darren, steals the comedic aspects of the play.

Some members of the audience from East Belfast were annoyed at the way their community and loyalists once again were being depicted as Neanderthals in comparison to the nationalist community and republicans. Gary (weakly, in my opinion) said it was a character speaking, the detective, and who used that rhetoric to humiliate and infuriate Big Ernie. I said that my hackles might also have been raised by ‘Brothers In Arms’, the recent play by Sam Millar, which I hadn’t seen but had heard that in the arguments between two brothers (one a dissident, the other a Sinn Féin MLA) the dissident’s arguments are given greater weight and authority.

Not so, said two loyalists who had seen it! It rubbished the dissidents, they said.

Anyway, ‘Love Matters’ is well-worth going to see. It is in the Lyric for the next few nights before transferring to the Project Arts Centre in Dublin’s Temple Bar. Touring details can be got from Aisling Ghéar’s website, here.

29th February. Finished ‘The Maltese Falcon’. It was published in 1930. Very entertaining. Casper Gutman is pouring Sam Spade a whiskey and says, “I distrust a man that says when. If he’s got to be careful not to drink too much it’s because he’s not to be trusted when he does.”

24th February. Was in the Court of Appeal today to hear the opening remarks in a case challenging the Public Prosecution Service to reveal the contents of the ‘confidential annexe’ referred to in our successful appeal three years ago. The case will be heard on May 4th. After court I shopped in the Heart Foundation Shop in Castle Street and for £4 got ‘The Book of Daniel’ by EL Doctorow, and ‘One Hundred Years of Solitude’ by Gabriel García Márquez, a book which I did not like when I read it the first time around but am so much enjoying Márquez’s biography that I thought I might give it another go. After all, I did not like at all Schubert’s Ninth the first time I heard it but then one day it just clicked and I was mesmerised.

23rd February. Did a Skype interview with US students at the University of Illinois on the subject of ‘Political Violence’.

22nd February. Did an interview with Aaron Edwards who first interviewed me in 2010. He is a Visiting Research Fellow at the University of Huddersfield and hopes to write a book, provisionally titled, ‘Britain’s war against the IRA’.

21st February. Yesterday and today I was in attendance at a judicial review in the High Court in relation to the failure of the Ombudsman’s office to carry out an inquiry into possible RUC misconduct at the time of the arrest and prosecution of myself and others in 1990. 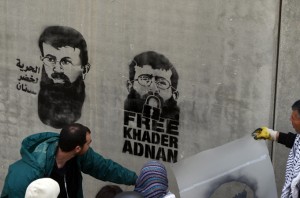 Did an interview with Democracy Now! (a US progressive and independently syndicated programme of news, analysis, and opinion) about the hunger strike of Khader Adnan. Also on the programme were Khader’s sister, Maali Mousa, and Bill Van Esveld, researcher at Human Rights Watch. Just as the interview began I was receiving news that Adnan had ended his hunger strike in a deal with the Israeli authorities.

20th February. Did an interview with Mehdi Hasan, Senior Editor (politics), New Statesman, on the hunger strike of Khader Adnan, and issued a statement of solidarity on behalf of the Bobby Sands Trust:

“Here in Ireland the British government’s prime minister Margaret Thatcher thought that she could break the will of our struggle by killing our prisoners who were hunger striking for their rights as political prisoners. She was wrong and the violence that the British sewed only reaped a whirlwind of resistance but at a heavy cost in Irish and British lives. The lesson from history is that one must talk and negotiate and recognise the rights of people to be free and to be free  from injustice and persecution.

“An earlier British prime minister, Ted Heath, thought that he could also break us through the use of ‘administrative detention’, that is through the use of internment-without-charge-or-trial, which is the pretext used by the Israelis for imprisoning Khader Asnan against whom they have no evidence. People in Derry who marched against internment were massacred on Bloody Sunday and fourteen of them were killed by British paratroopers. Again, that did not break us but only made us more determined to fight for our rights.

“It is probable that Israeli rulers are so hardened that they cannot find it within themselves to exercise clemency and resolve this hunger strike. They possibly do not even care what effect their behaviour has on their reputations and how people around the world view Israel’s behaviour with disgust. But they cannot win over the Palestinian people – even should Khader Adnan lose his right to life.

“It was a great Irishman, Terence MacSwiney, the Mayor of Cork, who was arrested by the British and went on hunger strike to the death, who said: ‘It is not those who can inflict the most but those who can suffer the most who will conquer in the end’.

“The thoughts of Irish republicans throughout Ireland are with Khader Adnan and his family and we hope that he wins his right to freedom.”