Represented Feile an Phobail, along with Geraldine McAteer and Angela Mervyn, at a fundraiser in Shorts Social Club for the inaugural East Belfast Arts Festival which gets off the ground this September. We were warmly welcomed and received and I spoke to a number of local leaders including Leslie Cherry, Maurice Kincaid, Wendy Langham, Maggie Andrews, Sammy Douglas, Mervyn Jones, Gary Mason, Mark Houston and Mervyn Gibson.

They put on great entertainment including a comedian, a blues guitarist and a tribute band to Van Morrison. However, one that really stood out was the Mama Kaz band. The chemistry between the musicians on stage was… exciting!

23rd May. Interviewed again by Pascal Pragnère who is completing his research “on national identities in Northern Ireland and the Basque Country.”

22nd May. Interviewed again by Thomas Leahy from England for his PhD which looks at British security and intelligence policies against the Republican movement from 1969-1998.

21st May. Finished ‘We’, a dystopian novel set in the twenty-sixth century, by Yevgeny Zamyatin which was written in 1920-21 and was banned in Russia until 1988. It has the distinction of having inspired George Orwell’s ‘1984’. It is the story of D-503 who keeps a secret diary and slowly discovers that he has ‘a soul’ and slowly discovers like-minded people who query their totalitarian Benefactor and rebels. But the dilemma of humankind remains – a choice between “happiness without freedom, or freedom without happiness.” Zamyatin once wrote: “True literature can exist only where it is created, not by diligent and trustworthy functionaries, but by madmen, hermits, heretics, dreamers, rebels, and sceptics.” 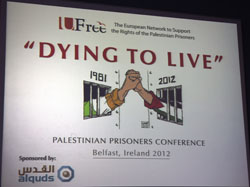 19th May. Participated in panel discussion in St Mary’s University College on the subject of Palestine, prison conditions and their recent hunger strike. By video link we heard from Gaza and the testimony of a former prisoner Obada Bilal about the horrific cruelty he experienced at the hands of his Israeli captors.

16th May. Went to St John’s Chapel after Requiem Mass to pay my respects to the family of Paul Graham who died suddenly last Sunday, a few hours after he attended his mother’s funeral. I had been at St Peter’s School for a year and first knew Paul from there. Later he was imprisoned in Long Kesh. After his release he successfully qualified as a solicitor; was an active gaeilgeoiri and a good supporter of Féile an Phobail.