This profile of Marwan Barghouti, who is currently on hunger strike in an Israeli Jail, appears in my book Rebel Columns, and was first published in 2003. 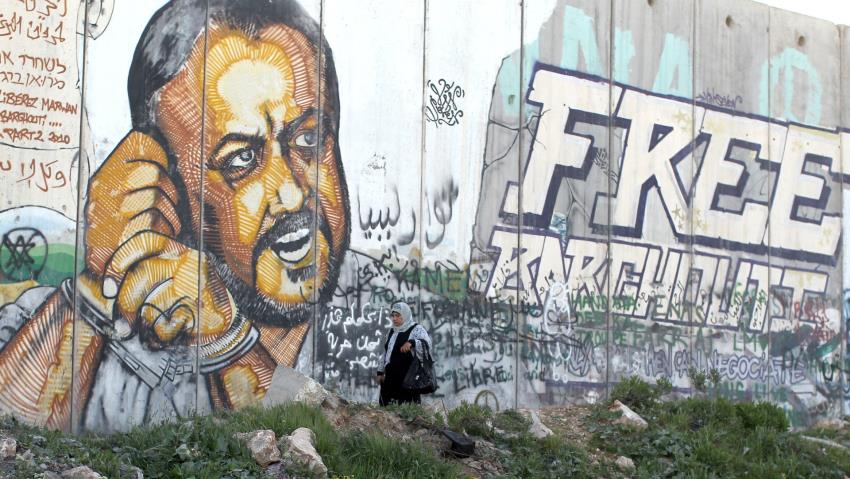 In a dangerous or threatening situation one or two individuals within any group will remain cool and rise above the rest who seem paralysed and incapable of action. Such individuals will exercise a focused judgement, will make decisions that may save or partly redeem a bad situation, will, in other words, show leadership (which is kin to showing courage) and in the process will become – often in opposition to their own humility – true heroes.

Similarly, throughout history, when a people finds itself in subjugation, oppressed and dispossessed – that is, facing a permanent threat which has dispirited and demoralised them – the righteousness of their cause amounts to nought in the absence of leadership, organisation and strategy.

Today (October, 2003), in the 21st century, right before our eyes, the Palestinian people are being destroyed by one of the cruellest and most cynical regimes in the Middle East, Israel, a state that is bankrolled by the US government. In flagrant breach of UN Resolution 242, first issued in 1967 and reaffirmed many times in the subsequent 36 years, Israel refuses to withdraw from the territories it occupied following the Six Day War. It continues to conquer, to build settlements – indeed, to build a Warsaw Wall through the West Bank, ghettoising the Palestinians and rendering impossible any viable Palestinian state.

It does this despite the fact that through superior violence and murder it has won from mainstream Palestinian groups recognition of the state of Israel. And in reaction it has spawned the phenomena of the suicide bombers.

I watch CNN fairly regularly. I was hooked on it especially during the debacle of the Florida count in the US presidential election in 2000. CNN has incredible resources, journalists or stringers in every capital of the world and breaks news with breathtaking speed. Millions in the US watch the channel and perhaps have their political opinions influenced by what they receive.

What I noticed – and this might not be the fault of CNN but rather a regrettable feature of the quality of Palestinian representatives and/or circumstance – is that in the aftermath of a particularly violent incident or dramatic development, the Israeli spokesperson is usually in a studio. He is suave, his English is impeccable (and often delivered in a North American accent) and he is questioned courteously.

On the other hand, the Palestinian spokesperson is often interviewed on a street corner or a makeshift studio. There is distortion or atmospherics on the feed; he usually speaks in broken English (unless, of course, it is Hanan Ashrawi) and is placed on the defensive by being pressed to distance himself from Palestinian violence.

A few years ago I noticed one Palestinian spokesperson in particular who stood out in stature above many others, including Yasser Arafat and the prime minister, Abu Mazen.

That man is Marwan Barghouti. He is articulate, confident and popular among his people.

I remember seeing him being interviewed in early August 2001 when there was a tremendous explosion on the street. A missile fired from an Israeli helicopter hit his office or his car, killing another Fatah member. Of course, since then the Israelis have murdered and assassinated several hundred alleged militants – collaterally killing children, women and men who shouldn’t be out in the sun in broad daylight.

Someone who interviewed El-Barghouti told me that after his arrest in 1982 he was on hunger strike and said that he drew inspiration from Bobby Sands and his comrades and could cite that Bobby died on May 5th 1981. In prison he mastered Hebrew from his jailors and can speak it far more eloquently than many Israelis.

He was born in 1959 to a West Bank farmer. At the age of 16 he joined Fatah and earned a master’s degree in international relations at Bir Zeit university. He is married with four children. During the first intifada of 1987 he was deported by Israel. He supported the peace talks with Israel in the early 1990s, returned to the West Bank in 1994 and ran programmes for Israeli and Palestinian youth. He became secretary of the Fatah movement and was elected to the Palestinian Legislative Council of the Palestinian Authority and has spoken out against corruption within the Authority.

However, in April 2002 Israeli forces in Ramallah arrested him. He was interrogated for several months for 18 hours at a time. For three months he was allowed to sleep for only two hours at a time and then only in a chair with his hands tied. He was denied food and water, has been regularly placed in solitary confinement and denied access to his lawyers. He was charged with directing the al Aqsa Martyrs’ Brigade, which is linked to Fatah and which has been responsible for many of the suicide bomb attacks, mainly against innocent Israeli citizens. He was condemned even before his trial. The Israeli Attorney-General said he was “an engineer of all acts of killings and a thug.”

From his prison cell he played a crucial role in Palestinian dialogue and encouraged Hamas and Islamic Jihad to call a truce last June (which later broke down).

He has been tipped to replace Arafat as chair of the Palestinian Authority and Israel fears his leadership. Foreign Minister Shimon Peres remarked that if that happened, “this will not be a positive development for Israel.”

El-Barghouti’s trial ended last Monday and judgement is expected in November. He refused to recognise the court in Tel Aviv and said that Israel’s grip on the West Bank and Gaza Strip should be in the dock instead. He accused Israel of violating 30 international treaties, including the Geneva Convention and of committing war crimes against humanity.

The alleged evidence against him was confessions from 21 Palestinians, none of whom appeared in court. Israel is notorious for its abuse of prisoners and has been condemned of torture by many human rights groups. During earlier court appearances his attempts to speak were interrupted but finally he managed to say: “We are a people like all other people. We want freedom and a state just like the Israelis. Israel must decide: either it allows for a Palestinian state alongside it, or it becomes a state for two peoples.”

One of the three judges interrupted him and said: “We are not historians nor government representatives. If it were in our hands we would issue an injunction ordering peace!”

To cheers from European Parliament observers El-Barghouthi replied: “Why don’t you just get up and say ‘I am against the occupation’!”

He said: “I am against killing innocents. But I am proud of the resistance to Israeli occupation. To die is better than living under occupation.”

Marwan Barghouthi – a true hero to the Palestinian cause.