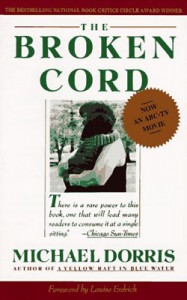 Whether a work of art, a poem or a novel can stand on its own, be judged on its own, without reference to its provenance and its creator, is a recurrent question in criticism. Because Wagner was anti-Semitic does this inevitably taint his music? Would our judgement be flawed if we knew little or nothing about his politics but adored his operas?

I was recently emailed by Sacha Layos from the USA. Sacha has an interest in Foetal Alcohol Syndrome but she was responding to a piece I had written some years ago about the writer Michael Dorris, some of whose novels, and those of his wife Louise Erdrich, I had read. The couple had adopted several children, some of whom had major medical problems, including Reynold who was killed by a car when he was just 23.

Dorris had written a book called, ‘The Broken Cord’ about FES from which Reynold suffered. Then, Jeffrey Sava, another adoptee accused Dorris and Erdrich of child abuse. Their marriage foundered and in 1997 Dorris checked into a motel room in Concord, New Hampshire, under an assumed name, placed a plastic bag over his head and suffocated himself. At the time of his death he was the subject of a police inquiry following accusations of sexual abuse by two of his adopted children, Jeffrey and Madeline, who are now adults. Both adopted children were early diagnosed with fetal alcohol effect, a condition which often manifests itself in unstable and aggressive behaviour and pervasive lying.

Anyway, Sacha’s email was so interesting that I asked her permission to reproduce it – and here it is.

I just read your piece on your site regarding Michael Dorris’ death. In it, you ask: “So the question is, I suppose: can a novel, a piece of music, a statue, a painting, be judged on its own merits, separate from its creator and the life he or she led?” I do not know the original date of your thoughts on Mr. Dorris though I suspect it was quite some time ago. That said, the timing of your question for me is very current for I am nearing the end of ‘The Broken Cord’. I wanted to offer you my thoughts on the subject since I suspect this is probably something you continue to question.

For background, I am reading the book because I have two adopted children both of whom were prenatally exposed to alcohol. I also serve on a local advisory board for an FAS diagnostic team. At this juncture, one more severely affected than the other – though as Dorris aptly described, the effects of pre-natal exposure both vary widely and in the timing of their appearance. In the course of reading the book, I was reminded by a friend of the circumstances surrounding Dorris’ death and the accusations that led thereto of which I previously was only vaguely aware. Despite being completely taken in by this book so much so that I found myself beginning to underline passage after passage that mirrored my exact situation, I stopped briefly in my tracks to research the history of the tragic ending. I questioned the same things you did and considering I have very strong feelings about those who abuse their children given my own history and that of my daughter’s, I contemplated changing my rapidly forming opinion of his work.

What I’ve concluded is that not only CAN you separate out a work from its creator, but you MUST do so especially in this case. Obviously, the truth will never be known in this case… partly because, with FAS, there is no truth. I think one has to be a parent to a child with FAS to truly understand that statement because it is not just a reference to the affected child’s ability to lie. You can never separate out what is the alcohol, what is the nature, what is the nurture and in the end, it does not matter because all you can do is go forward. In that same vein, you can never know the true motivations, thoughts, feelings, character of a writer, and I suspect our collective literary exposure and subsequent life experiences would be severely limited should we choose to only give credence to those writers with whom we morally agree.

Dorris’ book speaks volumes to me. I know the exact struggle he went through with respect to raising a child or children affected by alcohol. That struggle is endless yet Dorris’ identification and illumination of that dark side is potentially the most effective tool that could be used to help not only parents of affected kids, but service providers who think they too are going to have all the answers to this or that kid’s problems (they don’t by the way). The vortex of FAS can consume even the strongest of souls and this is what happened to Dorris though we will never know exactly in what manner.

Thanks for your time. Those are my two cents.