What a brilliant war memoir for its searing honesty in depicting the “ineptitude and cowardice” of senior commanders; the chaos and confusion on all sides (American gunners accidentally shooting down three Spitfires); the debauchery and cruelty of Allied soldiers (the so-called good guys); and how the destruction of war can return a humane and cultured people to the Middle Ages. But it is his accounts of the treatment of women by men at war which are the most disturbing and infuriating parts of this book.

Norman Lewis, a member of the British Intelligence Corps, was seconded to work with the American Fifth Army after the invasion of southern Italy. He and his colleagues had received little or no training.

In Salerno he witnesses a British officer interrogating an Italian civilian by hitting him about the head with a chair, the Italian’s face “a mask of blood”. The officer then called in a private and “asked him in a pleasant, conversational sort of manner, ‘Would you like to take this man away, and shoot him?’ The private’s reply was to spit on his hands, and say, ‘I don’t mind if I do, sir.’ The most revolting episode I have seen since joining the forces,” writes Lewis, not realising that there is even more to come.

Kids who jump on the back of jeeps or lorries hoping to steal something have their fingers severed by soldiers hiding behind the tarpaulin with bayonets. “God knows how many children have lost their fingers in this way.”

He also doubts an account given to him by an American soldier that they had been ordered “not only to take no German prisoners, but to use the butts of their rifles to beat to death those who try to surrender.”

However, in hospital recovering from a bout of malaria a short time later, a wounded US soldier confirms that those were their orders.

On his way to Sorrento he finds that most of the post offices have been sacked by the vanguard of the advancing troops who, he says sardonically, “seem to have been philatelists to a man.”

The village of Altavilla had been “shelled out of existence because it might have contained Germans.”

In Naples, which had finally resisted the Germans when they introduced forced labour, he is greeted with the sight of near-famine conditions, a father offering Lewis his starving daughter (in “some mutually satisfactory understanding”). All the tropical fish in the biggest aquarium had been eaten, people scoured fields for edible plants, including dandelions, and made ‘coffee’ from roasted acorns. Along the shore every winkle and sea-snail had been devoured (the Allies would not let fishermen fish in the bay). The tiniest of birds had been netted and eaten. The cat population of the city had ‘disappeared’. 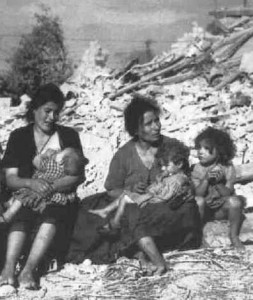 There are daily gunfights between rival gangs, pillaging and rapine by army deserters, kidnappings and reports of typhus. German bombers continue to attack and Lewis notes wryly, “The Germans murder only the poor in these indiscriminate raids, just as we did.”

He and his colleagues were inundated with information about suspected Fascists and felt they were simply being used and embroiled in many private vendettas. He also suspected that the Psychological Warfare Bureau’s report that 96 per cent of the Italian population collaborated wholeheartedly with the Germans to be exaggerated. The writ of the Camorra (a mafia-style organisation) ran strong and the Allies were often forced to work with and through local bosses.

The black market thrives on stolen property, much of it US equipment. Corruption is rife and he refers to Neapolitan kleptomania: thieves steal wheels from jeeps, telegraph poles and cables (cutting off entire districts), phials of penicillin, manhole covers – anything that can be exchanged or sold for food. (Some of the accounts could have come straight from Catch 22, or made their way into that novel.) When Allied troops or the local police seize smuggled or stolen goods, those same goods again make their way onto the black market through kickbacks.

It was estimated that out of a female population in Naples of 150,000, as many as 42,000 were engaged on a regular or occasional basis in prostitution. Lewis writes that probably three quarters of them would cease to be prostitutes if they could hope to stay alive by any other means.

The Germans were still in occupation of northern Italy. An American intelligence unit comes up with the idea of spreading streptococci and gonococci by sending diseased prostitutes North so as to spread venereal diseases amongst the Germans (who maintained the strictest of medical supervision over brothels) and diminish their fighting efficiency. They rounded up twenty attractive young prostitutes who had, but were showing no signs of, an exceptionally virulent and virtually ineradicable form of syphilis. Payment was to be paid in the form of gold coins which they could carry in their rectums. However, the women rebelled and the idea was dropped, so “the girls were then simply turned loose on the streets of Naples.”

A year later, British and American MPs, to deal with an epidemic of venereal diseases, go around arresting women in clubs, dance-halls and even in cafes, and bring them to the Pace Hospital for vaginal smears. If they are clear of infection they are released, while VD sufferers are forcibly detained for treatment as long as may be necessary. Lewis was invited along to witness the procedure and his description is stomach-churning:

“The inspections were to take place in an enormous room furnished with a row of gynaecological chairs. As soon as we arrived and joined the group of Italian doctors there, the detained women began to stream in like sheep about to be hustled through a dip. In most cases they were dressed with a respectable formality that seemed to intensify the indignity to which they were to be subjected. The operation moved at the pace of a bullfight. The first six women, some of them sobbing and protesting, were led forward, ordered to remove their knickers, pull up their skirts, and settle themselves in the chairs in which their legs, held in stirrups, were grotesquely raised and separated. At the door a constantly increasing group kept up a frantic argument. Among them were a few bejewelled courtesans and some obvious bar-girls, but the majority looked like young housewives, some with their shopping-bags on their arms, and there were some very young girls who were certain to be virgins. A suspicion grew that over-enthusiastic MPs had not been above snatching girls at random off the street.”

Just recently the Guardian newspaper reported that French prosecutors have ordered a criminal investigation into allegations that in 2013 and 2014 French peacekeeping soldiers raped children and demanded sex for food in Central African Republic. Lewis writes of the arrival of French colonial troops in Italy.

“Whenever they take a town or a village, a wholesale rape of the population takes place. Recently all females in the villages of Patricia, Pofi, Isoletta, Supino, and Morolo were violated. In Lenola, which fell to the Allies on May 21, fifty women were raped, but – as these were not enough to go round – children and even old men were violated.”

Lewis discusses with an old schoolmaster the raiding activities of bandits who were increasingly emboldened into carrying out ever larger operations (raiding police stations and Allied dumps for arms). The teacher tells him they have always existed, led by criminals and usually employed by great landowners to keep the peasantry in check.

He related an anecdote of the extermination of the last of the nineteenth-century brigands in a small town. “They were surrounded in a house, and the police couldn’t get them out. Every time they tried to break in someone was shot. In the end the priest was called in to act as a go-between. He got the police to agree that if the brigands surrendered, there would be no more bloodshed. The brigands gave in, and it was decided to kill them all the same, but as the police captain was not prepared to break his word about shedding blood, they were smothered one by one in a bed.”

At the end of his year in Naples (and in Benevento), Lewis thinks, “in their hearts, these people must be thoroughly sick and tired of us. A year ago we liberated them from the Fascist Monster, and they still sit down doing their best to smile politely at us, as hungry as ever, more disease-ridden than ever before, in the ruins of their beautiful city where law and order have ceased to exist. And what is the prize that is to be eventually won? The rebirth of democracy. The glorious prospect of being able one day to choose their rulers from a list of powerful men, most of whose corruptions are generally known and accepted with weary resignation. The days of Benito Mussolini must seem like a lost paradise compared with this.”

Italy, of course, did recover, due to Marshall Aid. Lewis, whose book was not published until 1978, could have before publication opportunistically tempered some of his contemporaneous observations and remarks. It is testimony to his honesty that he let his account stand, and what a portrayal it is of a city in ruins, of women in war and war on women.